Thirty seasons in and The Simpsons is still chugging along. But after three decades at “warm and fuzzy” Fox, the show is now under the stewardship of Disney following its massive $70 billion acquisition of the network earlier this year. Despite the new signature on the checks, Simpsons executive producers James L. Brooks, Matt Groening, Al Jean and Matt Selman assure us that they aren’t overhauling the series in any significant way. In fact, the only noteworthy change might be a greater sense of ambition, at least when it comes to their dream guest stars.

Topping that list is Donald Trump, whom the team discussed welcoming aboard at the recent Tribeca Talks event in New York City, during which they celebrated the show’s 30th anniversary.

“We’ve never had a president [on the show],” Brooks said, per Deadline. “But I think I’d love to have this president—if he’d read the script as written.”

“Maybe if we did it in pictures,” Yeardley Smith, who voices Lisa Simpson and who was moderating the Tribeca event, said.

Though Trump has not appeared on the long-running series as POTUS, The Simpsons was praised for an eerily prophetic Season 11 episode that predicted his political ambitions. “Bart to the Future,” from 2000, made a passing reference to Trump campaigning for president, a side gag that drew renewed interest leading up to the 2016 presidential election.

Groening said his dream guest was Robert De Niro, and why not? If you can snag a two-time Oscar winner, you do it. Shearer hopes to eventually recruit Canadian prime minister Justin Trudeau, while Selman would love to land one of the Monty Python stars John Cleese or Michael Palin.

Though many executives, producers and showrunners have been concerned over what the Disney-Fox merger means for their future, The Simpsons team is approaching it as a liberating creative challenge. “For us, I think to be honest about it, it’s been energizing,” Brooks said. “It’s like being forced out of college or something… I still think you can do everything we want.” 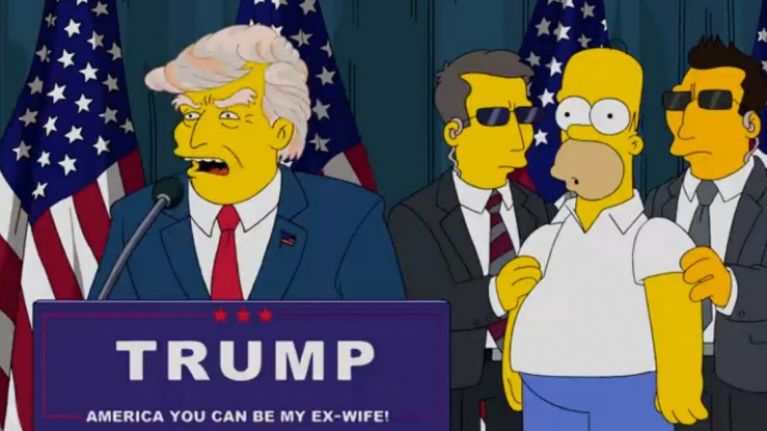