Hidden beneath the floorboards of Saxon + Parole, an equine-themed American eatery that’s been a fixture on Bowery for years, is another equine-themed restaurant that’s considerably newer: The Poni Room, a warm and subterranean “American izakaya” (an izakaya is an informal Japanese pub) that just had its grand opening a couple of weeks ago. A few factors indicate that it’s the ideal spot to keep your mom far away from. First, the name alone suggests a rambunctious playfulness that’s synonymous with the early stages of dating; second, restaurants that are literally underground just seem sexier by virtue of their urban planning. When I visited this burgeoning hot spot on a warm Thursday evening, I was not disappointed.

It’s tough to get a comprehensive idea of what a restaurant is all about if you go alone. But it’s arguably even tougher to tell if a bar or restaurant is an appropriate date spot if you’re actually on a date while scoping it out, because then your attention is directed at the hot person accompanying you (at least hopefully). It’s easier to get seated by yourself, as evidenced by the helpful hostess overseeing Saxon + Parole who dispatched an employee to escort me downstairs only a couple of minutes after my arrival. I was, however, told that I had only an hour to occupy my seat before I had to turn it over to another patron.

Saxon + Parole is inspired by historical New York, and looks it (in a pleasant way). The Poni Room is an entirely different story. The interior is cannily flanked by sultry low lighting, which makes the dark orange walls and hanging horseshoes overhead seem a bit more intimate. Seating probably caps at around 40 people tops, and you have the option of perching on a tall leather stool, nestling into a semicircle booth or planting yourself at a cute two-top table. Situated towards the back of the beam-supported central space is the tucked-away beverage room, which is entirely self-serve.

Once you’re settled in at your table, you can retreat to this room to fetch yourself wine, beer or a cocktail that’s either already been iced for you or is available on tap. Rosé is the central focus. Full bottles of the stuff were decoratively lodged into the walls of the Poni Room like they’d been launched out of a cannon into the brick, and the drink menu features 20 different varieties of the pink spring staple.

This beverage area was a huge draw when I visited: Couples and clusters of friends wedged themselves into the yellow-painted, pantry-size booze haven to test out the frozen cocktail dispenser. When I dropped in, frozen Poni Punch (Haku vodka, rosé, Aperol, watermelon and strawberry) was on the ready, but there are other cocktails listed on the menu: the 50/50 Martini (Roku gin, Noilly dry vermouth and cucumber bitters) looks particularly good.

Plus, chefs Brad Farmerie and Nicole Gajadhar have built a tantalizing food menu that revolves mostly around small-plate seafood; the half-dozen raw oysters with Thai mignonette are particularly inviting. But the crispy pork belly garnished with cucumber and chili caramel—which costs a modest $12—is where it’s at. The pork was meltingly delicious, and the portion size was perfect: I left feeling sated, rather than guilty for not having cleaned my plate.

The Poni Room’s only downside? Its ill-lit bathrooms. Lighting designers are always trying to cultivate a mood, but folks looking to go on a real date at this place should be able to check their makeup and adjust their flowing manes. In other words, I would definitely not take my mom here: The liquor-saturated physical equivalent of the Yeehaw Agenda is not for the faint of heart. 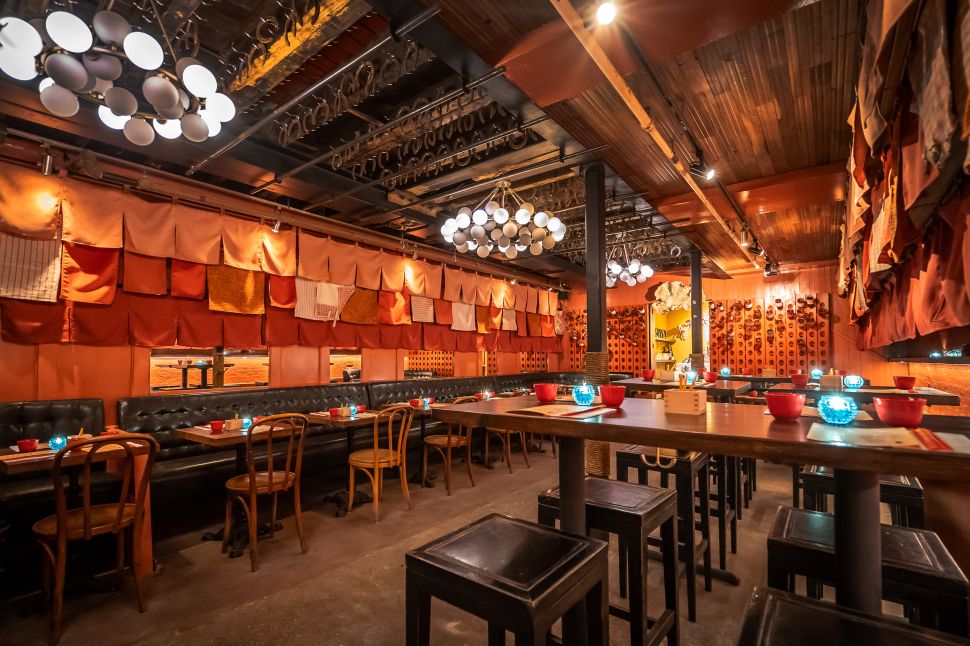