Game of Thrones excels at making viewers believe they can see their own lives reflected in high-fantasy tales of romance, redemption and the endless struggle for power. This is especially true if you happen to be running for president. On Sunday afternoon, New York magazine’s beloved vertical The Cut published an essay by Democratic presidential candidate Elizabeth Warren about the record-smashing HBO juggernaut, which is careening towards the conclusion of its eighth and final season. The article, titled “The World Needs Fewer Cersei Lannisters,” takes the reader on a tour of Warren’s fandom for the show, which seems to primarily revolve around the formidable Mother of Dragons, Daenerys Targaryen.

“As much as Dany wants to take on her family’s enemies and take back the Iron Throne, she knows that she must first fight the army of the dead that threatens all mankind,” Warren writes. “This is a revolutionary idea, in Westeros or anywhere else. A queen who declares that she doesn’t serve the interests of the rich and powerful? A ruler who doesn’t want to control the political system but to break the system as it is known? It’s no wonder that the people she meets in Westeros are skeptical.”

At first glance, the column looked like just another instance of a political figure attempting to appeal to the masses by associating her own narrative with one from popular culture. But why shouldn’t Warren see some clear parallels between herself and the Mother of Dragons? The Massachusetts senator is up against heavy hitters in the battle for the presidency in 2020, and she’s received a ton of contentious feedback and spikes in fundraising whenever she’s proposed dramatic policy changes like providing affordable childcare programs for all, dismantling big-tech monopolies and putting a “total moratorium” on new fossil fuel land leases. On Monday, Warren announced what is perhaps her most radical policy idea yet: a sweeping elimination of up to $50,000 in student loan debt for any American with a household income of less than $100,000 a year, which her campaign predicts would provide instant financial relief for 95 percent of the 45 million people grappling with student debt in the United States.

Warren’s Game of Thrones article goes on to condemn “the villain we love to hate, Queen Cersei of Casterly Rock,” in pointed terms. “Unlike Dany, Cersei doesn’t expect to win with the people—she expects to win in spite of them,” writes Warren. “Cersei’s betting on the strength of the bank to get her through the biggest fight of her life. It never crosses the mind that the bank could fail, or betray her.”

It’s worth noting that in her 2017 conciliatory memoir What Happened, failed presidential candidate Hillary Clinton explicitly compared herself to Queen Cersei. “Crowds at Trump rallies called for my imprisonment more times than I can count,” Clinton wrote. “They shouted, ‘Guilty! Guilty!’ like the religious zealots in Game of Thrones chanting ‘Shame! Shame!’ while Cersei Lannister walked back to the Red Keep.”

This doesn’t necessarily mean Warren is passive-aggressively insulting Clinton, however. Given how the Massachusetts senator frames Dany’s strengths and compares them to Cersei’s weaknesses, it’s more likely that she’s using Game of Thrones as a way to question capitalism as a whole, as well as champion her own campaign’s progressive stances within the context of the 2020 race.

Too late to audition to be a direwolf? pic.twitter.com/UT0N3Ey6gM

Ultimately, Warren’s column might not be the most eloquent, compelling piece of self-promotion in the world, but it’s definitely worth paying attention to. The senator’s most entertaining Game of Thrones plug actually took place earlier in April, when she tweeted a video of her beloved golden retriever Bailey scampering along a sidewalk. “Too late to audition to be a direwolf?” Warren wrote. 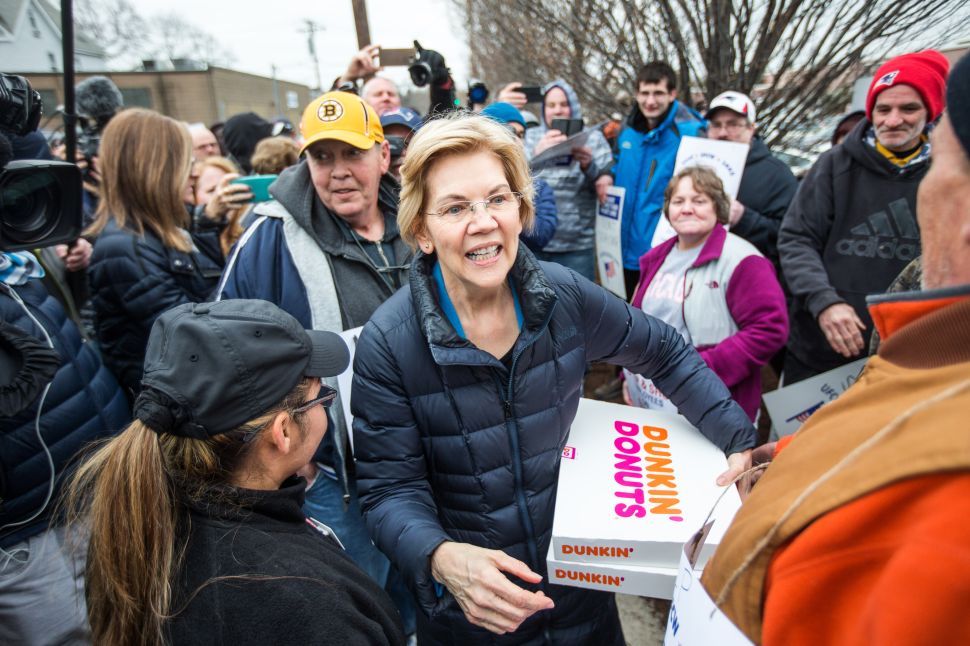