Famous for his abstract furniture and decorative objects, Italian designer and architect Ettore Sottsass is getting a brand new exhibition that places his bold, blocky and brightly-colored work in a somewhat unexpected context: the upheaval of his time. Opening on April 18 at the Institute of Contemporary Art, Miami (I.C.A. Miami), “Ettore Sottsass and the Social Factory” will present 50 of the seminal artist’s works including furniture, objects, ceramics and drawings in addition to 53 photographs, emphasizing the many ways his beloved designs were radically (and artfully) communicating ideas about contemporary society.

Creating during an era ripe with progressive thinking and monumental shifts—namely, Italy’s post-war economic prosperity and the social changes of the 60s and 70s—the exhibition’s curator, Gean Moreno, told Observer that he wanted to Sottsass’ work to better “understand the movements of the postwar period altogether in terms of changes in industry, changes in the technologies and changes in the market.” This approach is distinct; these iconic objects are generally seen in a way that extracts from their context. “Why not think of it as embedded in the time it was produced?” Moreno asked.

Out of this notion, “Ettore Sottsass and the Social Factory” will draw distinct parallels between the work and the cultural moments in which it was created. Accordingly, the exhibition presents objects made throughout the span of five decades. The work is organized into four sections relating to Sottsass’ concerns during different time periods.

It begins with various projects he made in the 1960s, such as conceptual drawings, ceramic objects, and his “Superboxes,” then looks at his photographs from the 1970s. Next, it turns the gaze of the audience to the furniture he created as part of the Memphis Group—a collective he founded in the early ’80s that drew from Art Deco and Pop Art to make decorative home furnishings. It’s this work that perhaps best encapsulates how Sottsass was responding to his surroundings. Known as a rebellion against the principles of modernism and what was regarded as “tasteful,” with Memphis, Sotssas said he was “quoting from suburbia,” through using mass-produced materials like laminate and plastic. He elevated these products associated with being a cheaper option for middle or lower class, rather than shunning them. He left the group in the mid ’80s, but even to the end of his life, in 2007, the social implications of his designs would continue to be a concern.

The exhibition hopes to provide a deeper insight into his thought processes and personal relationship to events and social conditions. In doing so, “Ettore Sottsass and the Social Factory” is trying to reveal a new side of the artist’s esteemed legacy. “Today, there are legions of designers who claim Sottsass as an inspiration despite very few working in a similar aesthetic,” said Jennifer Olshin, a partner at Friedman Benda Gallery, which represents the late artist. “They are drawn to his broad cultural and visual horizon, his freedom from accepted logic, and the notion that design can communicate ideas.” In fact, the exhibition will be the first in a series of biannual shows at I.C.A. Miami to highlight advances in contemporary design and its relationship to art, as a response to the rising local design scene in the city.

A constant collaborator, prolific creator and writer, and a generous mentor, Sottsass is a long time inspiration for many that came after him. “Sottsass’ contribution was less about tools and innovations and more about waking people up to the emotive power of design,” Olshin said.

According to her, his work was a departure from the prevailing modernism in which functionalism and a monochromatic palette were the norm. “For Sottsass, the importance of design was not primarily to give form but its ability as a mode of communication.” In this way, Sottsass pushed the boundaries of design, twisting it into a catalyst “for the senses and a discussion of ideas about society, food, other cultures and political debate.” 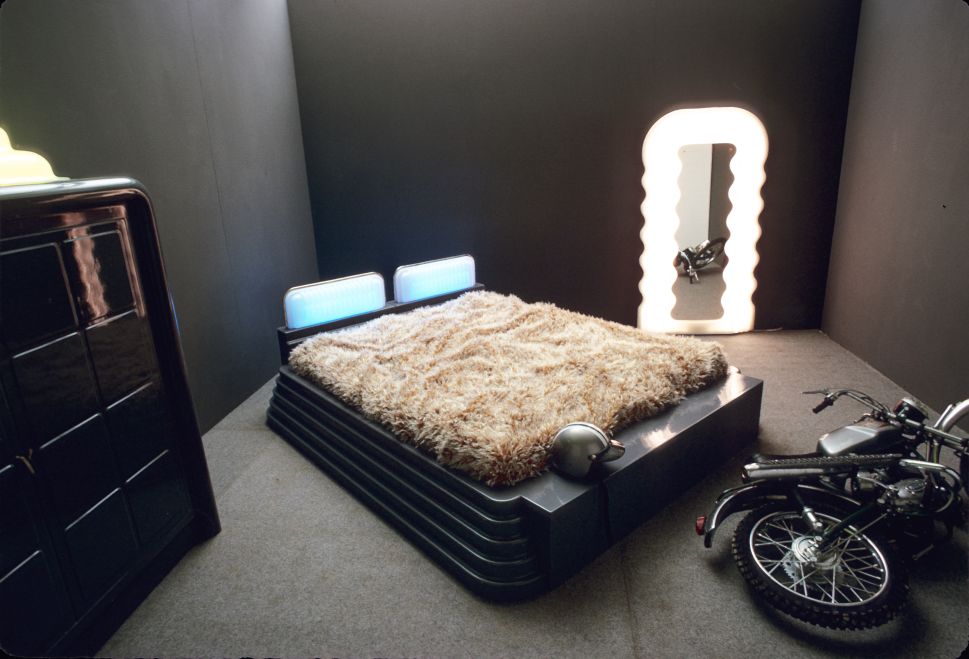