The Operation Varsity Blues scandal continues to unfold (and piss a lot of people off), but as of Monday, actress Felicity Huffman and 13 other defendants in the case have officially agreed to plead guilty to honest services mail fraud and conspiracy to commit mail fraud. In essence, they are admitting that they willfully consented to spend vast sums of money on a variety of schemes to get their kids into the colleges of their choice. Although the defendants’ punishments are to be determined, this is a major step in the legal proceedings.

Notably, Full House actress Lori Loughlin and her husband, Target-affiliated designer Mossimo Giannulli—the parents of student and beauty influencer Olivia Jade—were not named in the aforementioned plea deal. Among the parents who have pled guilty is New York City–based International Dispensing Corporation chairman Gregory Abbott, a food and beverage distribution figurehead who, together with his wife, Marcia, had been accused of paying mastermind William “Rick” Singer $125,000 to fudge his daughter’s SAT and ACT scores to increase her chances of admission. Abbott, Observer discovered, is also the author of Sheer Pressure, an erotic novel about the struggles of living with inherited wealth.

Huffman, Abbott and the others’ pleas are a big deal, but apparently parents aren’t the only wrongdoers in hot . Michael Center, who was fired from his position as men’s tennis coach at the University of Texas at Austin the day after he was initially charged by the FBI, has now consented to plead guilty to accepting $60,000 in cash from Singer (as well as $40,000 for the UTA tennis program) in exchange for recruiting one of the children of Singer’s clients for his tennis team. And as of April 2, Stanford University has quietly and definitively expelled a student linked to the scandal who allegedly lied about her sailing credentials during her admission process. After the student gained entrance into Stanford, a $500,000 contribution was made to the university’s sailing program, CBS News reported.

So who will end up in prison? New York attorney William Moran thinks at least somebody will. “I think these prosecutors want to make an example here so they don’t have to do this again,” Moran told People. “If parents now know that they could be prosecuted and go to jail for this, that might be a factor that would prevent someone from doing this again.”

Huffman, for her part, has released a statement expressing remorse. “I accept full responsibility for my actions and will accept the consequences that stem from those actions,” the actress said Monday. “I am ashamed of the pain I have caused my daughter, my family, my friends, my colleagues and the educational community. I want to apologize to them and, especially, I want to apologize to the students who work hard every day to get into college, and to their parents who make tremendous sacrifices to support their children and do so honestly.” 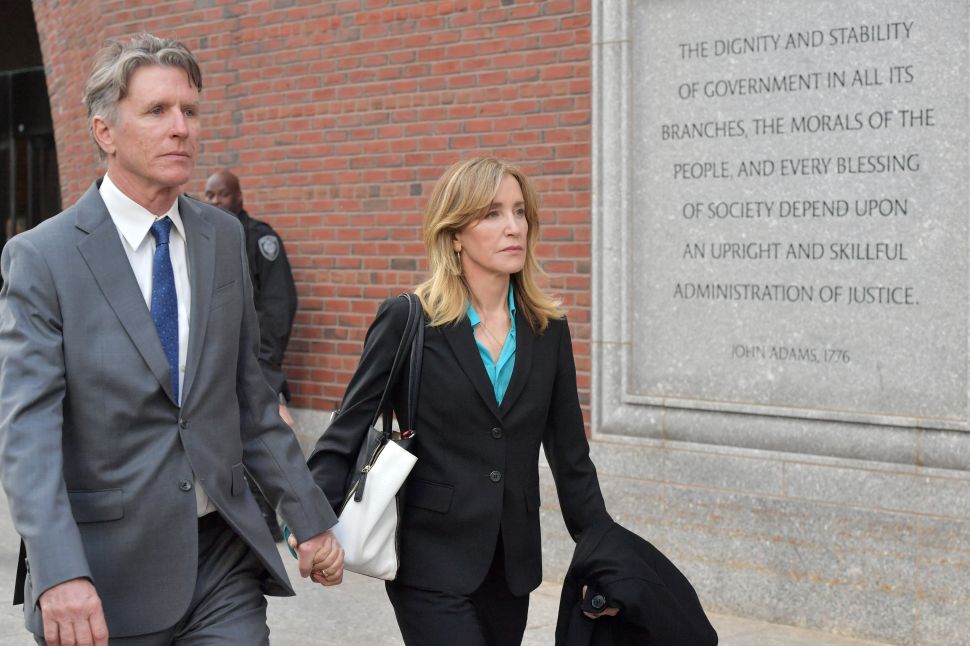