So much depends upon the slash in the title of FX’s addictive showbiz bioseries Fosse/Verdon (beginning April 9). That punctuation mark distills so much: opposites attracted, hard choices, sticky duality. Such push-and-pull qualities put the razzle-dazzle—and the pain—into the nearly 30-year union between epochal director-choreographer Bob Fosse and unstoppable Broadway diva Gwen Verdon.

He was a pill-popping, insecure workaholic whose fathomless libido no amount of chorus girls could fill. She was a triple threat who won four Tonys in six years, put her career on hold to be a mother, but stayed hungry for the spotlight. She also tolerated Fosse’s serial infidelity—until cutting him loose to save herself and their child, Nicole. (They separated 11 years into their marriage, but never divorced.) Verdon is the unambiguous moral hero of the series (five episodes were available to review), but that doesn’t automatically make Fosse the villain. They needed each other, used each other, inspired each other’s best work. When Bob complains that the amphetamines aren’t giving him enough kick to finish edits on Cabaret, Gwen coolly counsels him to…just…pop more. The implicit question: What price art?

Granted, that’s not a very original query, and difficult artists—overwhelmingly male—have been lionized for centuries. The show’s source material—Sam Wasson’s 2013 tome Fosse—doesn’t exactly wallow in his subject’s goatish disposition but binds his bedroom antics to genius. Sample rhapsody: “Sex improved on respect and trust—for the dancers and for him. Sex brought him closer to the epicenter of talent, as if by dipping his hand to the geyser, he could steal back a drop for himself.” Rather than double down on that priapic apologia, the producers (Hamilton writer-star Lin-Manuel Miranda and director Thomas Kail, and playwright Steven Levenson) take a twofold tack: Give the women in the story more screen time and treat the leads’ bumpy relationship with honesty and grown-up complexity. So, it happens that Fosse and Verdon’s friend, Joan Simon—wife of playwright Neil—rates five passing references in Wasson’s book. The series expands her role (she’s played with acerbic zest by Aya Cash) and depicts her early death from cancer, which devastates Gwen and underscores the series theme of parenting.

In terms of Fosse’s many affairs, the series strives to show a continuum. Some women clearly enjoyed fooling around with their slinky, smooth-talking boss, whereas others, like the Pippin dancer whom Bob walks home and hits on hard, knees the dirty old man in the groin (that’s in the book, too). Because let’s be honest: Fosse wasn’t your average sequined skirt-chaser.

He began as a dancer, tapping his way through the Midwest’s crummiest vaudeville houses (teenage Fosse was supposedly molested by burlesque dancers, which would explain at least some of his demons). He was gentle and nurturing with his dancers, but worked them hard, and was revered for his attention to detail—a flicked wrist here, an isolated hip roll there—as together they rewrote the rules of Broadway dance.

Sam Rockwell is perfect casting for the role, his lean, compact physique gliding around the rehearsal room, iconic cigarette dangling on lip, absolutely nailing Fosse’s shy drawl. For years, Rockwell has been honing his talent for gonzo types on the fringes of society, now he also gets to be sexy, dangerous, sad, and manic. At the apex of his career—with multiple Tonys, Emmys, and Oscars cluttering his hotel-room bureau—the strung-out and booze-addled Fosse flips out, and Rockwell makes the meltdown both terrifying and slapstick silly.

If Fosse was an emo lothario, Verdon was the nicest narcissist you ever met. Michelle Williams does a magnificent job channeling the mannered but immensely lovable redhead whose veins ran greasepaint and who had a superhuman ability to win a crowd. More than Fosse’s muse, Verdon is shown in the series to be his choreographic right-hand woman and aesthetic life coach, adding key direction on the sets of Sweet Charity and Cabaret (even as her husband is screwing the German translator). Williams radiates humor, strength and—I hate to say it—the ability to put up with a lot of crap from men, whether it’s her husband or director Joseph Hardy (the delightful Jeremy Shamos) looking pained as he gives her meticulous notes during one of her ill-advised forays into non-musical stage acting. Gwen was a trouper in life as in art: Just soak in the shifting shades of shock, amazement, and terror on her face as Gwen motors away from Fosse in a taxi after a crucial breakup on Majorca.

Since they have about five decades of personal and showbiz history to encapsulate in less than eight hours, the writers wisely cut between periods in the early episodes, giving us a wide-angle view of the totality of Fosse and Verdon’s dual careers: the string of hits in the 1950s and 60s (Can-Can, Damn Yankees, Sweet Charity), the lure of Hollywood in the 1970s, with flashbacks and flash-forwards making up the glamorous, tormented jumble of their lives. To depict the deadening routine of popping pills and bedding actresses, directors resort to Requiem for a Dream-type flash-cuts: pills-hand-swallow-bed-girl’s face-hand-clutch-bedsheets-orgasm, and so forth. You kind of wish for less coy gimmickry in depicting the ups and downs of a sex addict. Not graphic fornication for its own sake, but gritty, erotic realism would have suited this man forever obsessed with the liberating—and corrosive—effects of sexual expression.

The show is best when it slows down and lets the smart, snappy dialogue flow between equally matched opponents. In the second episode, the audition scene for Damn Yankees is beautifully staged, a duet of mutual seduction as Fosse puts Verdon through her paces in a sham tryout for the role of demonic temptress Lola. (She’s already got the part; he wants her on his side.) He’s a young choreographer who’s cocky but nervous; she’s already a bankable stage star, tolerating his whim and openly mocking him. As Williams learns the steps, and adds a few of her own, and Rockwell murmurs encouragingly, they open up to each other: He shyly shows his banged-up heart, and she reveals her shiny, impregnable armor. Blushes and brass, slouching and flash, they were two sides of the same bruised, insatiable ego.

Witty, smart, handsomely shot and stuffed with juicy cameos, Fosse/Verdon is ambrosia to show folk, from the lucky bastards who saw Chicago or Pippin in their first incarnations, to the kids weaned on Glee, Wicked and Pitch Perfect. For the young ones in particular, the series should be eye-opening. This isn’t your safe, cutesy High School Musical showmance. It stinks of flop sweat, cheap motel beds, crowded dressing rooms and closing-night booze. It’s theater as a dirty habit, from a couple who made the old song-and-dance routine dangerous fun. 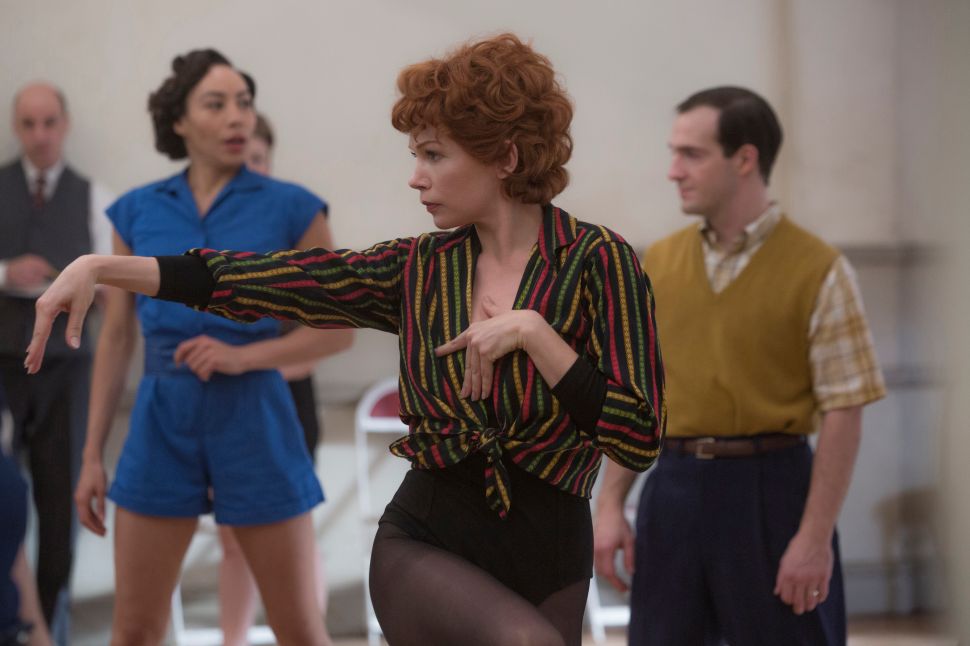