The moment eager Game of Thrones fans have been waiting for is almost here. The eighth and final season’s first episode airs April 14, and while you think you have the ultimate GOT viewing party planned, the Refinery Hotel may have you beat.

For the next month, the midtown hotel at 63 W. 38th St. is bringing a bit of Westeros to New York with an exclusive suite and experience dubbed “Lannister’s Lair.” So instead of piling onto your friend’s tiny couch to speculate Jon Snow’s ultimate fate, you can book a stay here and feel like your own king or queen in the North.

A one-night stay at Lannister’s Lair starts at $569, and you can get the room on Sundays from April 14 through the the show’s finale, which airs May 19. Since there are only six episodes this season, you’ll need to act fast.

The room’s perks abound. Not only is it easier to get to than Winterfell, but it comes stocked with many a gold goblet as well as gilded candle sticks, decanters and catering platters. Stately house banners adorn one of its walls.

While there doesn’t seem to be an Iron Throne, you can channel Cersei with any of the various fur throws tossed on the bed and chairs, or embrace your inner Daenerys Targaryen among the plethora of “dragon egg” candles strewn about the room.

Of course, no GoT fete is complete without some Westeros-inspired snacks. The package also includes a charcuterie board, two bottles of the hotel’s signature red or white wine, and two entrees from a Game of Thrones–themed room service menu, which boasts dishes like Braavos Branzino (a whole grilled branzino with olives and potatoes), Feast of Winterfell (pork shank, collard greens, heirloom beans and a pomegranate gremolata) and Dragon Snack (a 16-ounce boneless rib-eye steak).

And don’t fret if you’re feeling a little rusty on your House Stark and House Lannister knowledge—it has been a while. The suite is all set up with HBO and HBO Go for optimal memory-jogging binge-watching. Not to mention the bed looks so much more comfortable than that Iron Throne. 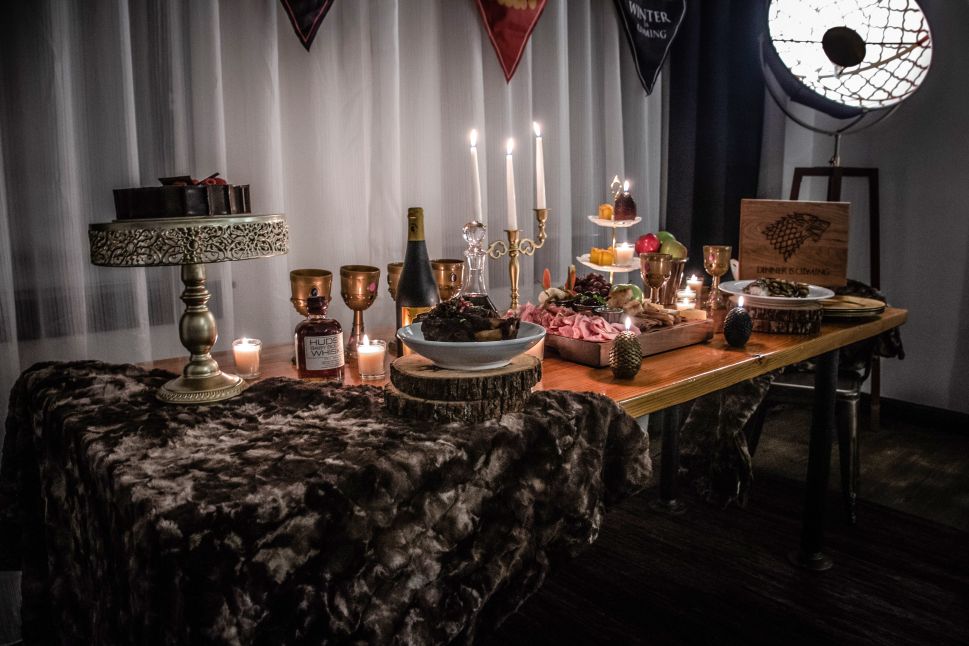