Garry Winogrand remains a larger than life figure in the world of photography. His chaotic images of jostling crowds and perturbed passersby reveal, in the best of his work, the chaotic intimacy of major metropolitan areas. People are smashed into tight spaces, are hiding in shadowy corners, or rushing to their office after lunch.

Winogrand meets their energy like passing glances, squeezing as much into the frame as possible before it disappears. “The pictures are tilted, skewed, unsteady,” wrote Geoff Dyer in his book, The Ongoing Moment. “There is nowhere for our gaze to rest because, in these pictures, nothing is at rest—least of all Winogrand himself.” At its worst, his kinetic style can seem leering and aggressive, the reciprocal nature between the artist and subject feeling more like an unprovoked attack.

There have been ebbs and flows to the perception of Winogrand over time. By the mid-to-late 1970s, his work, while still revered in some circles, was coming under scrutiny. His 1975 book Women Are Beautiful was criticized for its macho aesthetic and lack of focus. The critic Arthur Danto, comparing his work to that of Robert Mapplethorpe, wrote that it was “extremely aggressive” and “predatory.” By the end of his life, Winogrand was living in Los Angeles and shooting roll after roll with no direction in mind. Often, he would shoot from the passenger seat of a car, letting anything that happened to be out the window come into his frame.

When he passed away from gallbladder cancer in 1984, he reportedly left behind around 2,500 rolls of undeveloped film and 4,000 rolls that were processed but never printed. At the time, most of it was deemed unworthy of exhibition.

But times have changed. Winogrand is having a resurgence of sorts. Last year saw the release of both the documentary Garry Winogrand: All Things are Photographable, directed by Sasha Waters Freyer, and the book The Street Philosophy of Garry Winogrand, a series of 100 photographs accompanied by short, discursive essays by Geoff Dyer. And beginning on May 3, the first exhibition dedicated to Winogrand’s color photographs—a largely ignored part of his body of work—will open at the Brooklyn Museum.

The color work shows a different side to Winogrand. Much of it seems out of character, less hostile than his more black-and-white work. There’s more warmth and stillness. Most notably, this can be seen in his color pictures at the beach, where the energy is less haywire than the street. People still fill the frame, but they are in repose. In an untitled picture that is undated, but based on appearances most likely made in the mid-1960s, we see various legs in the sand. Some are tangled together, others stretched out and still more languidly moving to another spot. Movement has slowed down.

In others from this period we see subjects, usually young men, actively matching Winogrand’s gaze; some even begin to pose, flexing their shirtless muscles. This is rare—when a subject stares directly at the lens in a Winogrand photograph there is often a sense of danger, as if the man holding the camera has been caught doing something illicit. Here, there is mutual pleasure extending from watching and being watched.

It’s worth comparing these to other Winogrand pictures from the beach, such as Coney Island, New York, a black-and-white photograph from 1952. From the back, we see a man lifting a woman in the ocean. In midair, her legs kick the , splashing out of frame. She seems to be in fear while others in the ocean—a young boy toward the foreground, two older men in the background—either look on with amusement or don’t notice at all. This could be playful or this could be violent. The image holds you in the uncomfortable space between the two. Or another image from the same beach shot six years later, where Winogrand catches a few people hiding from the sun under the boardwalk. The only issue is that the man in the center of the frame, from where the camera is positioned, appears to be headless.

Color seems to be a working method that allowed Winogrand to be more conscious of what he was shooting. The zippy, adolescent glee of the black-and-white photographs is replaced by a controlled play of hues and tones. In Untitled (Cape Cod), from 1966, a simple shot of condiment bottles on a table becomes a dance of bright yellow mustard and deep red ketchup. Or Untitled (New York), from 1960, where a black woman, wearing a flowery dress, stares at the ground in front of a bold blue wall that seems to match her shoes.

But for all the above photograph’s merits, it still speaks to the main problem with Winogrand’s work—its treatment of women. They are often isolated, or framed around being looked at (as in the case of a color photo in the exhibition that shows two sailors gazing down at a woman waiting to cross the street). There are more images of just women, alone in a picture, than of men, who are mostly allowed to be joined by friends or colleagues. This stretches across all of his work, and reveals more about the photographer than his subjects.

Winogrand once asked: “How do you make a photograph more beautiful than what was photographed?” It’s admittedly a difficult task, and one that few photographs have mastered. Winogrand only achieved this a few times, and the one that comes to mind most readily is included in the exhibition. Untitled (Coney Island), shot sometime between 1952 and 1958, shows two men framed from the chest up. One is shirtless; the other has his sleeves rolled up and rests his head on his friend. They are tired, sunbaked. Winogrand captured them in this brief, quiet moment, splashed in chromatic splendor, revealing a gentle tenderness among men. 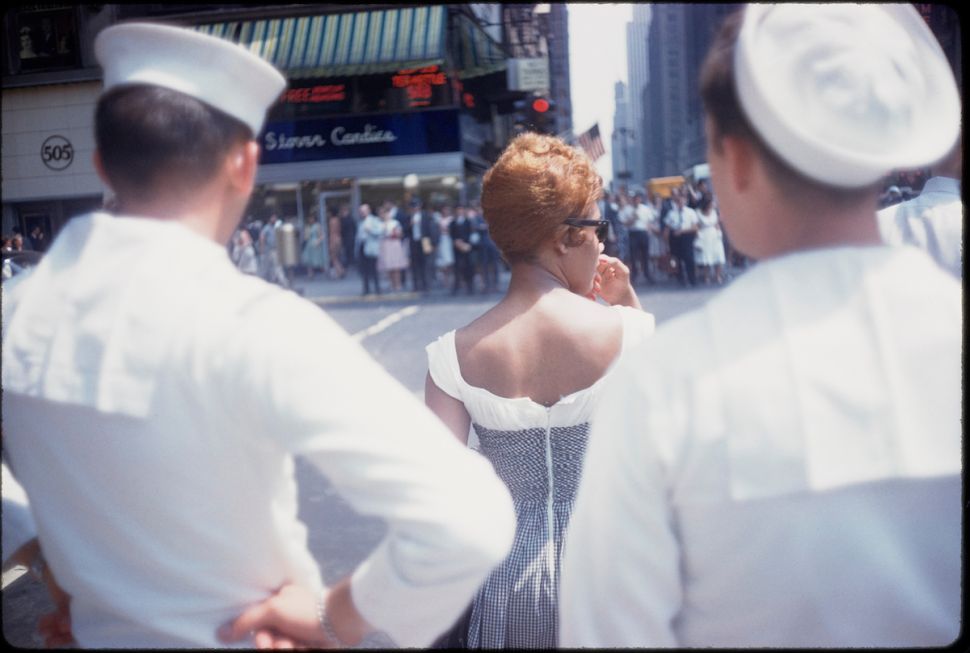