Cannibalism comes up a few times in Shakespeare: allusions in King Lear, Macbeth, Othello and The Tempest (the anagram “Caliban”). But Titus Andronicus is the only one where people actually, y’know, chow down on their neighbors. The title character, whose daughter has been raped and mutilated by the sons of Tamora, Queen of the Goths, retaliates by killing the offenders, cooking their flesh into a pie, and serving it to their mother. A gleeful Titus shares his recipe with Tamora shortly before he stabs her. Playwright Taylor Mac’s Gary has likewise cannibalized Titus with savage relish. What Mac excretes from the feast is a pungent, runny substance that won’t be to everyone’s taste. Still, give this prodigious artist credit for trying to transmute the Bard’s crassest, bloodiest play into an ethical work of theater.

More than a cheeky exercise in art-vandalism (although it’s also that) Gary is a high-camp response to the moral slaughterhouse of Trump America. Mac has said in a New Yorker interview that Gary is revenge on revenge tragedies (an evolution from Mac’s 2009 queer-liberation parable The Lily’s Revenge), begun immediately after the 2016 election. The resulting tragi-farce—in which history’s bit players mop up the mess that those in charge left behind, and undergo a political awakening—interrogates our lust for vengeance, and whether the cycle will ever be broken. Heady stuff—with lots of farting and penis jokes, too.

After a divinatory prologue from Julie White about our insatiable appetite for violence (interrupted by squirts of blood from her severed arteries), the curtain rises on a room stacked top to bottom with hundreds of twisted, dismembered corpses. The bodies have been hastily sorted into piles of men and women and children (the latter mass discreetly veiled). We are in the banquet hall of General Titus Andronicus, in the aftermath of his gory revenge and the ensuing Roman coup (cue offstage shouting). Enter Gary (Nathan Lane), a street clown who survived the hangman and has been dragooned into cleaning duty. His putative boss is the sour, resigned maid, Janice (Kristine Nielsen), who teaches him how to drain the corpses’ bowels and blood (separate tubes, don’t get them confused). Knowing the ridiculous, pulpy plot of Titus will help out with references to Saturninus and Lavinia, but not to worry: Gary helpfully delivers a synopsis in rhyming couplets at the top of the show.

The first third of the piece is, for want of a better term, a workplace comedy, as squeamish Gary and crotchety Janice go about their duties. There’s idle banter (in stage-Cockney accents), bickering and the odd bit of corpseplay (Gary admires one of the hunkier stiffs, “He got a bit of a noncommittal charm. Kind of bloke who draws you in by not giving much”). Later, while trying to dress a body, Gary gets a face full of urine (Santo Loquasto designed the life-size, muppet-y cadavers). “Just seems, if this is the kind of thing ya gotta do on the regular, ya might not be living your best life,” Gary sighs.

You see, Gary longs to trade up, from clown to fool. “The clown’s a selfish bloke who’s only goal’s to satisfy his belly, heart and groin,” Gary tells Janice. “But fools are empathetic sorts who learn the suffering of others ’cause they’ve been thrown out of homes and had the poo of life thrown at them just for being different from. And so while clowns are in it for themselves a fool’s ambition is to save the world!” And thus we have Gary’s—and Gary’s—secret agenda: to create absurdist, theater-of-the-ridiculous spectacle as a rebuke to the cruelty and inequities of the world. The next hour or so will be a meandering journey to that anti-fascist art explosion.

For all the Molière-via-Richard-Wilbur cleverness of Mac’s iambic pentameter, the most enjoyable bits here are visual. Julie White surfaces from the pile of bodies as Carol, a traumatized midwife who delivered Aaron the Moor’s baby and got killed for her labors. White’s show-stopping re-creation of her progress through Titus—delivering the baby, being murdered by Aaron, and her journey up through the mound of corpses to appear before us now—is an inspired, hilarious dance of hysteria. Nielsen and Lane’s kneading of corpse limbs is a wind concerto of flatulence. And the climactic “Fooling,” Gary’s great gesture of artistic defiance, is gloriously demented: a chorus of dead soldiers with bouncing erections, confetti cannons and Lavinia’s barren branches (which she used as prosthetics for her severed hands) sprouting flowers.

Lord knows we need a laugh, and the piece intermittently delivers, thanks to the immensely graceful director George C. Wolfe and the most accomplished farceurs in New York theater. Nielsen’s appalled, eyes-agog double-takes, Lane’s marksman comic timing, and White’s high-strung zaniness—it’s almost too much comic fuel for such a slender, downtown-ish vehicle. Because for all the big-budget sight gags and high-octane mugging, there are dull patches. Short on plot, long on flowery rhetoric and meta-theatrical winks, Gary ends up chasing its tail, promising that art can transform the world before admitting finally that, no, it can’t. Still, such a swaggering pastiche of gallows slapstick, lyricism, and political outrage doesn’t wash up on Broadway every season. Gary leaves a big mess in its wake. After it has been swept up and boxed away, we’ll see if it made any difference. 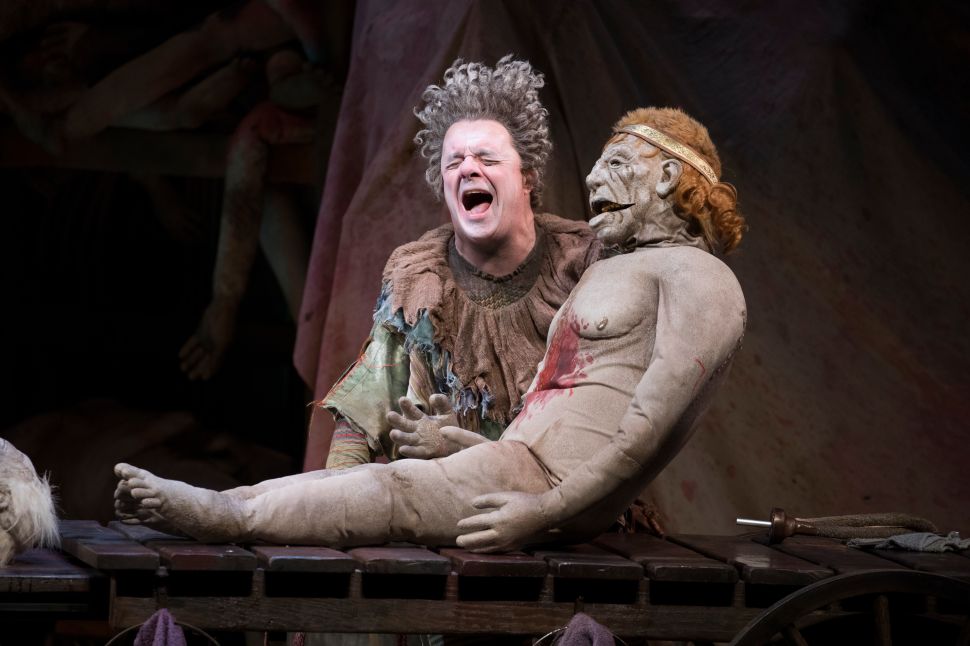