It’s always a little disorienting to emerge from a theater after a performance of Wagner’s Götterdämmerung and see the real world still extant after the opera’s musical depiction of the “Twilight of the Gods,” an apocalyptic cleansing destruction of the universe.

Saturday afternoon, following the music drama’s season premiere at the Met, it was downright startling to see the sun so high up in the crisp spring sky. Part  of that phenomenon was the insanely early curtain time for the piece—11:00 a.m. is an hour to start discussing a venue for brunch, not to hear Wagner—but another more welcome aspect was the crisp, energetic conducting of maestro Philippe Jordan.

A performance that under the Met’s former musical director might have lumbered on for something close to six hours here whizzed by in not much more than five and a half. Though Jordan’s take may have lacked the ultimate in doom-laden profundity, his bright orchestral colors and lively tempos brought vigor and youth to this melodramatic denouement of the massive four-opera Ring cycle.

Handily enough, a ring makes a perfect metaphor for this experience. Precious metal was all around, including a brash vaudevillian take on the role of the hero Siegfried by debuting tenor Andreas Schager. He wields a muscular sound with a lot of metal in the top as well as an energy level that would make Vittorio Grigolo seem downright narcoleptic.

Also fascinating were bass-baritone Evgeny Nikitin and debuting soprano Edith Haller as the scheming Gibichungs. Neither role is very long, but these artists found striking ambiguity and a subtle sense of threat in even the shortest lines of recitative.

As he has done in earlier Ring operas, Tomasz Konieczny sent a chill through the theater with his very first lines as Alberich: his eerie dark tone and intense presence evoked sheer horror. Alas, next to him, the real villain of the show, bass Eric Owens, came off an affable opera singer trying to make himself heard in an unfriendly tessitura.

So strong were the Norns and Rhinemaidens that I wished one of the lower voices from those groups (say, Elizabeth Bishop or Tamara Mumford) could have been moved into the important cameo role of the Valkyrie Waltraute instead of the unsteady and incessantly gloomy mezzo Michaela Schuster.

Götterdämmerung—indeed, the entire Ring— stands or falls on Brünnhilde, the fallen goddess who takes on the radical task of regenerating and purifying the universe. Sadly, soprano Christine Goerke, for all her very obvious hard work, fell short of the sublime.

Her singing sounded effortful, with an ungainly rattling vibrato, and in the vital higher reaches of the part, above E-natural or so, she was chronically flat.  She flung herself around the stage with tireless vigor, but the effect was not so much enraged demigoddess as put-upon soccer mom.

In Goerke’s defense, she (and the rest of the cast) got absolutely no help at all from the Met’s eight-figure Robert Lepage production, which leaves the singers to their own devices on a narrow apron downstage while 1990s-quality CGI animations loop incessantly in the background. Particularly egregious is the wood grain pattern denoting the castle of the Gibichungs: those tragic scenes resemble green-screened commercials for a discount paneling outlet in New Jersey.

Dramatically and visually this production is the worst fiasco of Peter Gelb’s incumbency at the Met. What Lepage has “created” is not a Ring but rather the negative space inside a ring’s hole. 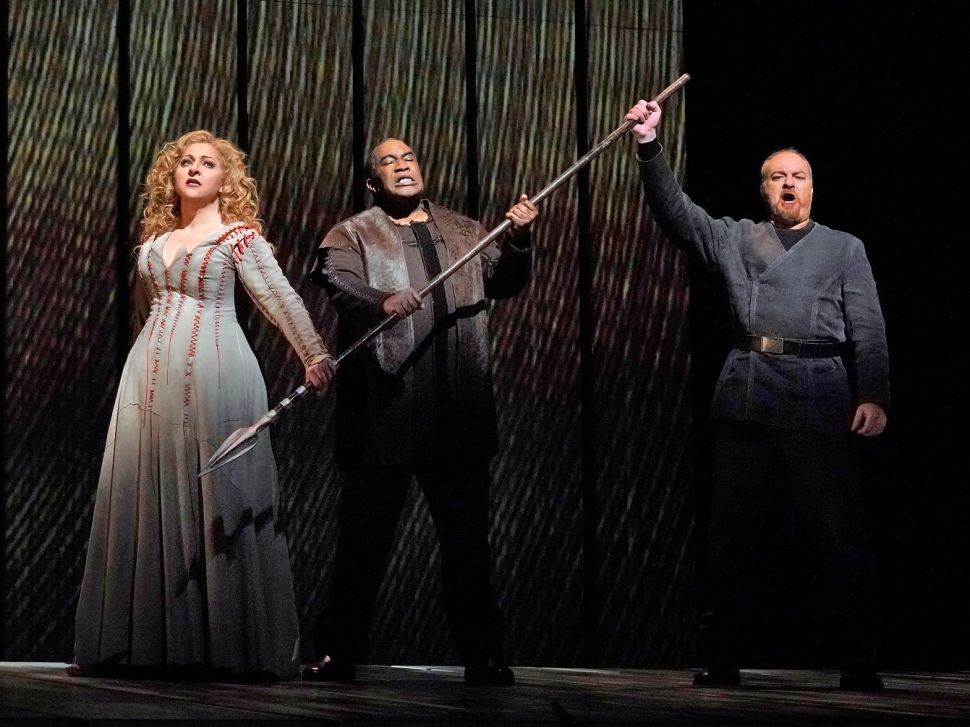