Who doesn’t love a concept album? It’s where rock hipsters and the drama geeks find common ground. From the old-school classics (Quadrophenia, Ziggy Stardust, The Wall) to those of more recent vintage, like Janelle Monáe’s The ArchAndroid or Beyoncé’s Lemonade, the genre is a uniquely potent fusion of pop and narrative, one that tends to embrace myth, baroque fantasy or heady social statements. Since Broadway cast recordings were (for decades) the original concept albums, it was inevitable that producers would try to reverse-engineer “rock operas” into stage spectacles—Tommy, American Idiot, not to mention Andrew Lloyd Webber’s pioneering Jesus Christ Superstar and Evita, which originated on vinyl. And although the urge to theatricalize makes sense, there are dangers in channeling the bodiless glories of a great album through actors on a stage. Hadestown exemplifies the pleasures and pitfalls.

Singer-songwriter Anaïs Mitchell’s celebrated 2010 release reimagined the myth of Orpheus and Eurydice as a workers’ fable of blues, ragtime, and New Orleans jazz. The Greek tale of a divinely gifted poet-musician whose snake-bitten wife dies on their wedding day—prompting his journey to Hell to bring her back—is one of Western Civ’s great love stories. So sublime is Orpheus’s voice, he charms nymphs, trees, gods—eventually even Hades, lord of the Underworld. Hades allows Orpheus to lead his lover back to the surface, so long as he doesn’t glance back at her. Trust and doubt struggle in our hero’s breast, and the winner will mean the difference between joy and tragedy. Mitchell’s Brechtian-Americana ballads (featuring guest vocals by Justin Vernon, Greg Brown and Ani DiFranco) made for a whiskey-soaked, foot-stomping folk opera you could visualize between earbuds.

It’s in the journey to three-dimensional life where trouble begins. Director Rachel Chavkin staged this version Off Broadway at New York Theatre Workshop in 2016, where it became something of a cult hit. The current, glitzier production made a stop at London’s National Theatre to respectful reviews and now arrives on Broadway in a season full of big-tent, high-profile musicals (The Prom, Tootsie, Beetlejuice). Without question, Hadestown has a younger, artier pedigree and superb design (as with Chavkin’s boffo production of Natasha, Pierre & the Great Comet of 1812). Rachel Hauck’s moody set blends industrial gloom with New Orleans-style elegance, a neat revolving stage and a hydraulic trap that delivers doomed souls to the underworld. Michael Krass’s flappers-and-tramps frocks and Bradley King’s rock-sepulcher lighting all lend the piece sepia-drenched retro cool.

And the cast is rich with charismatic worthies. Silver fox André De Shields lends his funky-grandpa vibe to the narration-heavy role of Hermes. Big-voiced Eva Noblezada is pluck personified as a waifish Eurydice. Fitting for the god of the underworld, Patrick Page’s basso profundo seems to issue from the lower basement. And, as Persephone, Amber Gray dials her devil-may-care jazz diva routine to 11, ensuring her eventual transfiguration as Eartha Kitt on Broadway one day. Less fruitful is Reeve Carney’s Orpheus, conceived as a socially awkward art savant. Laying on the Dear Evan Hansen too thick, Carney’s neurodiverse Orpheus (lots of gaping, arms hanging limply, fingers twitching) is a misfire. The survivor of Spider-Man: Turn Off the Dark remains a bit generic, despite sweet looks and a pretty pop falsetto. Hadestown needs a stronger injection of sexually charged romance.

But that’s a minor quibble compared to the structural hurdles Chavkin & Co face: the theatrical flimsiness of the source, and the limitations of pop songs in a theatrical context. The original album is 57 minutes on 20 tracks. If only Mitchell (book, music and lyrics) had trusted a talented playwright to add, say, 30 minutes of dialogue to build character and flesh out this Depression-era dystopia—all the nuts-and-bolts stuff that turns a neat premise into a convincing drama. The seeds are there. Mitchell cleverly grafted a capitalist fable onto the myth. Hades is modeled after a sort of union-busting factory boss, and the damned are demoralized workers. Eurydice goes down to hell not because of a snakebite; she’s starving and needs a job—and Orpheus is too busy writing his poetry. There’s a potentially rich political vein here. The first-act closer, “Why We Build the Wall” predated Trump, but it’s grim, militant lines about keeping out the poor carry a punchy echo of Brecht-Weill.

All this rich soil begs for nuanced book scenes. Instead, between added songs, dance sequences, reprises, and underscoring, Hadestown runs more than two hours. And it drags. Ruthless cutting of songs would have intensified the emotional stakes. Instead, by Orpheus and Eurydice’s climactic walk out of hell, you want to hurry them along, so we can get to the foregone conclusion. You may savor a haunting melody or a poignant lyric, but cumulatively, the score is a mass of slenderly dramatized ballads and anthems. After a while, the sameness of the sonic landscape grows monotonous. The plot is just circling; we’re no closer to the characters; Hermes keeps narrating. The material constantly fails the “show, don’t tell” rule of good storytelling.

Will any of these flaws matter to the show’s success? Interestingly, it seems that this noble failure and the vapid earsore Be More Chill both come with built-in fanbases. When I attended, folks were screaming and cheering after almost every number. Perhaps Hadestown’s 2017 Off Broadway cast album went viral, like Be More Chill’s. Or Anaïs Mitchell’s longtime admirers had packed the house. Hordes of people are treating it like an established hit. Many talented people worked on it, and there are a dozen lovely songs, but I wish they were in a better package. Hadestown has tons of good intentions—which paves the way to you know where.

Update: An earlier version of this story misspelled the name of Amber Gray. The piece has been updated to reflect this change. Additionally, Critic David Cote retracts his use of the term “hoochie-mama.” Since the score and visuals of Hadestown reference New Orleans jazz and blues, he thought the slang term would be in keeping with the spirit of the show and his critique. However, the sexual connotations of the term do not apply to the character of Persephone, played by Amber Gray. 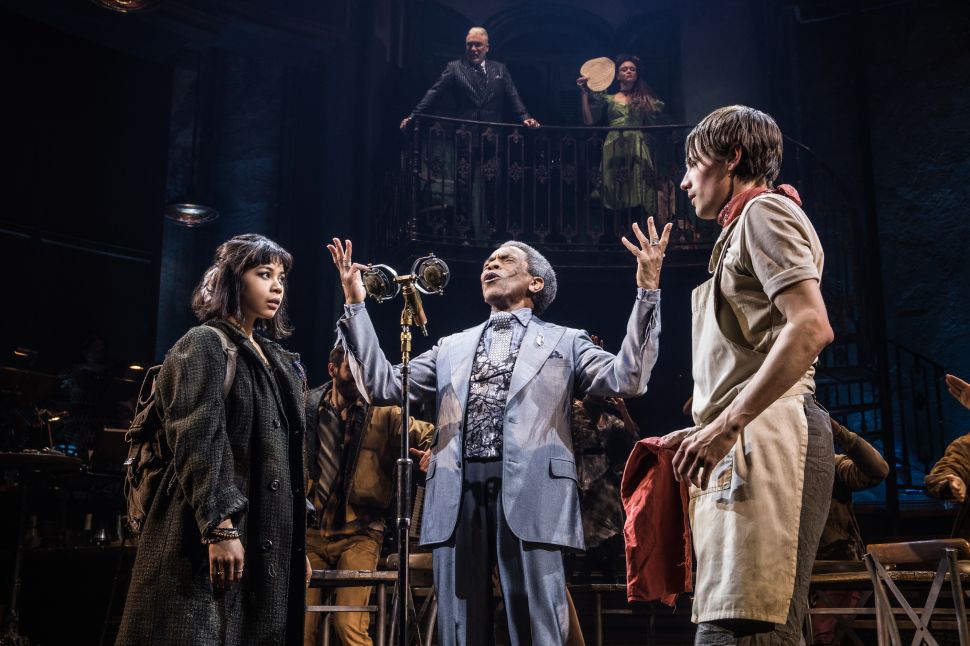