The phenomenal Laurie Metcalf looks and sounds absolutely nothing like Hillary Clinton, yet in her co-starring role opposite John Lithgow in Broadway’s Hillary and Clinton she is, as always, nothing less than mesmerizing, covering every silence with riveting business, even when she isn’t talking. For 90 minutes without intermission, she really makes you think what she’s doing is set in marble by an eavesdropping insider peering through the Clintons’ keyhole. Lithgow’s Bill Clinton is equally inscrutable, but the play, written by Lucas Hnath, whose imagined sequel to A Doll’s House won Metcalf a Tony award, really belongs to her, and she devours it like a room service sirloin.

Because Hillary and Clinton, directed by Joe Mantello with his usual graceful clarity, is nothing more than a pretentious parody of what the author imagines the Clintons must be like out of the center spotlight and behind closed doors, you have to pretend the two people onstage at the Golden Theatre are really the eternally provocative political powerhouses they are pretending to be.

From the prologue, when Metcalf appears with the house lights blaring and uses a hand mic to explain she’s just a mere mortal with the audacity to approximate a real-life icon who considers herself a mysterious paradox living in an alternate universe, you are aware it’s all make-believe. But, oh, boy, does it seem, at times, to be as real as the Mueller Report.

The setting is an ugly Chloe Lamford–designed hotel room in New Hampshire in 2008, when Hillary thought she had the election wrapped up—until Barack Obama himself (Peter Francis James) shows up to save her from an embarrassing defeat by offering her a position as his running mate. She arrogantly refuses, and everyone promises her day will come. (It did eight years later, when she actually won the popular vote only to be defeated again, this time by the outdated, archaic formality called the electoral college.)

The story plays hopscotch with salient facts, but a (sometimes dubious) portrait of the Clintons does emerge without condescension and it’s worthy of perusal. Ignoring the warning of her campaign manager (Zac Orth) not to call in Bill for advice or money, she does both. When he flies into New Hampshire to help out with her campaign, the fireworks (real,  imagined, both?) begin.

Neither Clinton comes off unscathed: Hillary is arrogant, cold, ruthless, blindly ambitious to be a better president than her husband. Bill is a baggy-eyed, rejected, self-pitying bundle of pomposity who makes humongous mistakes, both publicly and privately, in politics as well as in life, and never learns from them. Hillary has the intelligence and the manipulative genius, and the public doesn’t like her. Bill has the personality, and the world forgives him everything, for all the wrong reasons. The play is a game of thrust and parry from which they emerge bloody but unbowed, and forever interdependent.

Hnath depicts Hillary as so busy and self-involved that she’s unaware Bill had developed stomach problems traveling the globe for charity and forgetting to eat nutritious food, or that he had completed only three pages of his next book and spent Christmas alone with a turkey loaf. They haven’t seen each other for such a long time that he has to ask permission to touch his own wife. She worries about what people really think of her, and compares herself to a split persona—one a boring candidate without passions, and the other a political clone who only looks like photos of the real Hillary.

She takes her punches at her husband, characterizing him as a man who structures every decision based on how it will look in the tabloids. One devastating line that wounds him deeply: “Ask the people the one thing they best remember about you. All they remember is your personality.” Among the topics the play imagines them tackling in private: why she stayed in the marriage so long, when divorcing him would have won her more respect (and more votes). He: “You are so… weird.” She: “This is what I’ve been through, Bill. I don’t cry. I keep it together.” The names Monica Lewinsky and Donald Trump are never mentioned, but their presence is everywhere.

The play is falsely advertised as a comedy, but except for a few jokes, it is rarely humorous. Neither of the Clintons are likely to see it, and their fan base will feel uneasy and distrustful. But I recommend Hillary and Clinton anyway—if not for what I learned, then for what I felt like I was learning. In the end, the Clintons survive their defeat the way they always do, but the chilling reality hits the audience right between the eyes—that considering what we’ve ended up with in the White House, the worst is yet to come. 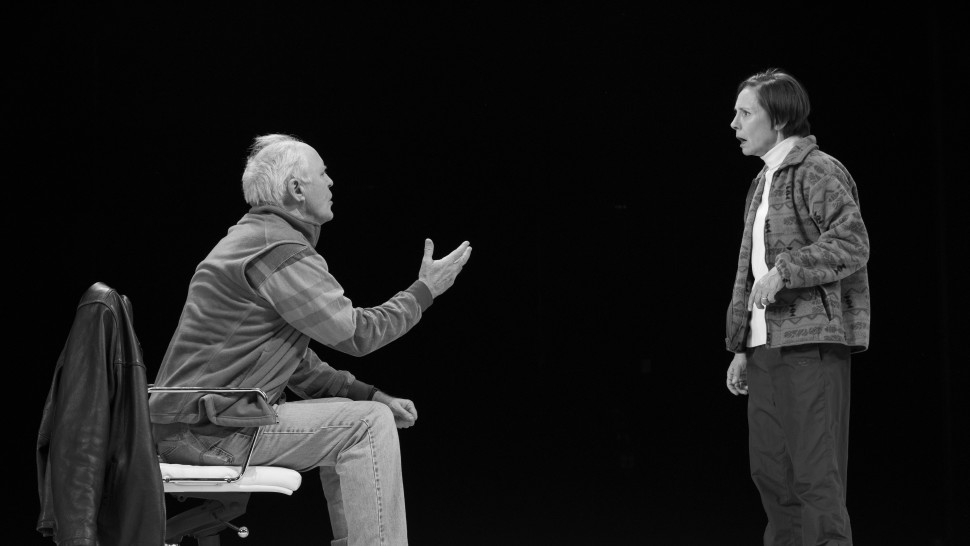