In the always-malleable fashion world, there are few constants, but Anna Wintour is one of them. The Condé Nast artistic director and Vogue editor in chief deserves all the accolades she’s received for revolutionizing the industry, but in this modern-day “internet era,” what’s especially fascinating is how Wintour has had to become more accessible to readers while somehow retaining her signature frostiness.

It’s a tricky tightrope to walk, as evidenced by Vogue’s YouTube content, which features rather stilted talking-head interviews with Wintour. In the latest video, she answered questions from New York City denizens who were scooped up on the street. After contributing her thoughts on Bella and Gigi Hadid’s personal style (she thinks Bella looks best in a crisp horseback riding outfit, while Gigi shines most in simple jeans and a plain white T-shirt, and she’s right on both counts), Wintour then shared her perspective on how women should dress when they’re pregnant.

“I’ve been very taken by the way Meghan Markle has been dressing,” Wintour said. “Her heels actually seem to be getting taller every time I look at a picture of her.” Indeed, Markle has been expertly highlighting her growing bump with form-fitting fabrics and well-chosen prints.

“When pregnant, I think it’s very important to continue wearing your own personal style,” Wintour continued. “I never understand why women suddenly decide they want to hide their pregnancy. Why not celebrate it? It’s an incredibly joyful time in a woman’s life, and it’s nothing to be hidden or be ashamed of. Much better to, in a way, flaunt it, so go for it.”

Of course, dressing to hide a baby bump isn’t always an aesthetic choice resulting from personal shame—sometimes women do it to manage or postpone the stigma that still, unfortunately, surrounds pregnancy. However, the notion that women should be able to celebrate their pregnancies with whatever outfits they desire is certainly a societal goal worth pursuing.

Wintour also responded to a question about what she thinks of Alexandria Ocasio-Cortez’s looks. “I think people spend a lot too much time talking about her style rather than her substance and what she has to say, but I do personally love the red lipstick and the hoop earrings,” Wintour said. “I think it’s wonderful to have a young woman in the political arena that is obviously not frightened to say what she means, that represents another generation, that is independent-thinking, that isn’t falling into line with the conventional wisdom of what a woman in politics should be, or how she should look, or how she should conduct herself.”

This is a wholly flattering endorsement, but we still can’t help but ponder what Wintour—or at least our fantasy version of her—would have to say about these topics behind closed doors, when there’s no longer a camera on her. 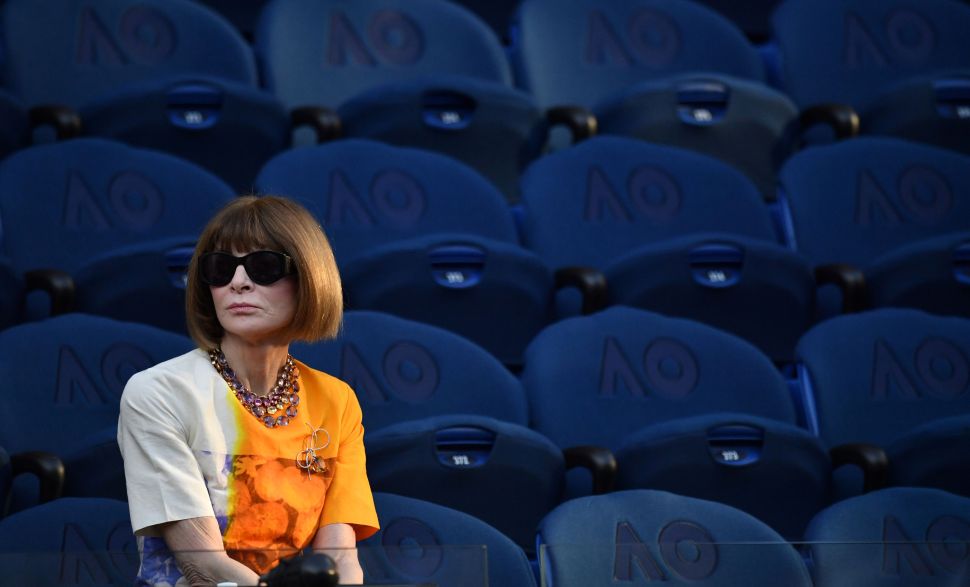