“Artists are always a bit nervous to take these steps outside of their comfort zone. But there’s so much precedent in art history for blue,” artist Idris Khan told Observer during a recent phone conversation. “You know, ‘blue periods,’ and all that. You almost fall into blue, somehow. Rather than being in your face, it has this subliminal effect, for me.”

Opening May 4, Sean Kelly Gallery in Manhattan will host a solo exhibition of new work by the acclaimed British artist who feels he’s venturing fairly far outside his usual way of working, having rarely stepped beyond the confines of black, white and gray.

The show, titled “Blue Rhythms,” will be Khan’s second solo with the gallery. The exhibition features paintings, photographs, and sculpture aimed at continuing the artist’s quest to turn excerpts from daily life into abstractions that create immersive, emotional experiences.

“I’ve made subtle shifts into using color but never something that’s quite so all-encompassing as this body of work,” Khan said.

Cool tones engulf motifs that, to this point, have dominated Khan’s career. Sheet music, stamped words, and layered photographs surround the viewer in a blue haze from all corners of the gallery. The radiating color quite literally shows his work in a new light.

Khan has developed his visual language since receiving an M.A. from the Royal College of Art in 2004, where he studied photography. His initial approach to art merged his photography and printing skills with interests in the abstract oeuvres of masters like Jackson Pollock, Willem De Kooning, and, especially, Agnes Martin.

“When I was a young kid,” Khan said. “Art didn’t necessarily come naturally. I wanted to be an athlete, a runner. That didn’t work out and the next thing I was best at was art.”

Photography was appealing, largely, for the printing process. Khan was enthralled early on by the physicality of turning the image into a print rather than simply being entranced by the act of composing a single image as an end in itself.

One of his first artistic pursuits was photographing the marks that athletes leave on various courts. His early celebrated photograph White Court from 2001 shows the blue and black streaks that untold matches left on the wall of a squash court.

“I’m always very interested in capturing the traces of what’s been left behind,” Khan said. “The court photographs looked like paintings to me, with all those blues and whites. I was always trying to make photographs feel like paintings. It was the goal.”

Those initial inclinations grew into layering photographs of single subjects from Caravaggio paintings, to sheet music, to pages from books, most famously the Quran. No matter the underlying content of Khan’s work—whether stamped phrases authored by himself, verses from the Quran sandblasted onto metal cubes, or a triptych of video playing Franz Schubert’s deathbed compositions—the key to understanding Khan’s art is in unmaking the content’s underlying composition.

“The first question people always have for my work is: What’s the text about,” said Khan.

“From my point of view, the content of the text, or the sheet music, or whatever, is taken out as I transform it into a painting. What’s left is a place for the viewer to bring their own emotions. I’d like viewers to engage with the content of my work as abstract shapes. Words, musical notations, it’s all an abstraction floating on a background. I love that struggle, though—the desire we all have to read words and know their meaning. But there’s a beauty in stripping that away.”

Art industry tastemakers have clamored for Khan’s work from the start. Advertising mogul Charles Saatchi of Saatchi & Saatchi was famously one of the first collectors to purchase a work of Khan’s. Today, he is included in major museum collections and high-profile galleries around the world. A single painting from his studio sells for well into six figures.

Beyond “Blue Rhythms,” Khan is excited to finish and install a large piece of public art in London. The 26-foot sculpture will layer 65,000 photos Khan has taken of his private life over the last five years.

“You just see the edges piled on top of each other,” he says, “It’s a monument to time and life and almost like a portrait.” The sculpture is scheduled for installation in October.

The forthcoming public sculpture is a companion or extension of the most personal work on view at Sean Kelly for “Blue Rhythms.” Called my mother 59 years, this much smaller sculpture uses all the photographs that Khan could find that depicted his mother, who passed away in 2010.

“There’s been this explosion of image-making in the last few years. It seems like they’re taking the place of memories. After my mother died, I looked back at her albums and searched for every picture of her that I could find. I could only find 380 photographs. That was fascinating to me. She lived for 59 years and we’re left with this pile of pictures. I wanted to give an idea of the volume of space and time that these photos are occupying,” Khan said.

In an image-heavy world, Khan stands as something of an outlier, stripping a certain amount of straightforward meaning out of the sources he uses and pushing us back to a place where we can get comfortable with the abstract. And as Khan’s art-world star continues to rise, shows like “Blue Rhythms” allow viewers an unfettered view of his own process of adapting to new territory. As a viewer, we suggest you follow his lead and “fall in.” 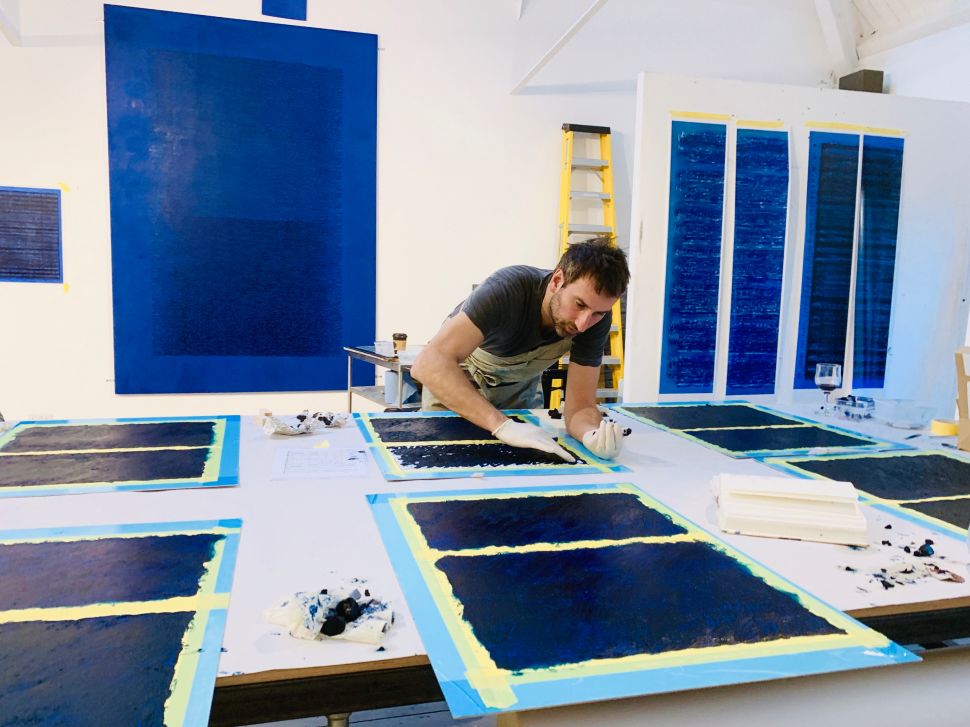