Not so oddly for a play about newspapers, Ink opens with a rundown of the reporter’s five Ws: Who, What, When, Where and Why, the elements of any good story. Larry Lamb (Jonny Lee Miller), a seasoned editor who feels he’s been overlooked by his London bosses at The Mirror, explains these principles to a young Australian businessman by the name of Rupert Murdoch. It’s 1969, Murdoch intends to buy the failing broadsheet The Sun, and he wants Lamb to run it. Over the course of a dinner tutorial, Lamb tells Murdoch that he never cared for Why. It implies, he says, “that there is a point to things….Sometimes shit—just—happens. Only thing worth asking isn’t ‘Why,’ it’s…‘What Next’?”

What Next? Ah, that would be us: Trump, Brexit, Fox News and a strain of weaponized conservativism that has spread across the globe like a virus. Murdoch didn’t invent right-wing nationalism, but his purchase of The Sun, and its success as a trashy tabloid notorious for its topless Page 3 girls, was the start of a global news and entertainment empire that has profoundly shaped—and coarsened—the world we live in. Few media moguls have so ruthlessly courted reactionary politicians like Thatcher, Reagan and Trump, exchanging positive coverage for favors such as relaxing regulations, blurring the line between news and propaganda.

But I’m getting ahead of the subject. Ink, written by James Graham (Privacy) and directed with nonstop gusto by Rupert Goold (American Psycho), keeps tightly focused on the early days, when the players were scrappy underdogs (more or less). Murdoch purchases the Sun from the Mirror, upon which he learns that a contractual obligation requires continual publication. Once the Mirror prints its last Sun, Murdoch and Lamb will have just one day to turn over an entirely new paper. Keeping the pace brisk and cheerfully profane (these are British pressmen; heavy drinking and copious swearing are part of the job description), Graham sets Lamb on a wild chase across London’s pubs, trying to round up a team of “the spurned, the spited, the overlooked…a ship of undesirables,” per Murdoch’s buccaneering brief.

Watching the bloody-minded Lamb assemble a team (Goold stages it like a club dance) and then lead them in the creation of a brash, populist new product makes for an entertaining first half. In one standout scene, Lamb and his staff brainstorm about things they truly love: gossip, sex, fighting, dance, TV, free stuff. WIN FREE LOVE he scrolls on the big board, a mantra for the race to the bottom. Enabling the audience to suppress its collective gag reflex at the thought of rooting for Murdoch and his cronies, Graham effectively turns the formation of the paper into a battle of working-class lads and lasses against the stuffy, champagne-liberal establishment—personified by the Mirror’s smug chief editor, Hugh Cudlipp (Michael Siberry).

After the Sun launches with a healthy circulation, the play grows moodier: What will Lamb and his crew do with their voice? Murdoch defends giving the people what they want as the sign of a free market, no morally better or worse than democratic elections. For Lamb, the editorial decisions are less theoretical, more torturous: when the wife of Murdoch’s deputy, Alick McKay, is kidnapped for ransom, he must decide whether to stay out and let the police handle it, or muck in cover it like regular news.

On the whole, the leading men are well-matched. Bertie Carvel, last seen on Broadway as the ghastly, sadistic headmistress Miss Trunchbull in Matilda the Musical, again zestfully animates a dead-eyed sociopath. His Murdoch is a study in bland ruthlessness, a pouty schoolboy in Savile Row suits who won’t correct an insolent slouch, like a bored meerkat. (One caveat: Carvel goes far too light on Murdoch’s Aussie twang.) Miller’s handsome, square-jawed Lamb is the Faust to Carvel’s Mephistopheles, so successful he’s miserable.

Graham churns out meaty dialogue and keeps things moving, but there’s a sense that he’s often rushing to check off the next journalistic milestone (at times the fast-cutting script feels like notes toward a more efficient film). The action seldom slows down long enough to dig into any of the characters’ back stories: Lamb is resentful, working-class, Northern, with a nasty temper; Murdoch is inscrutably power-hungry, sexually squeamish, friendless; the many supporting characters—juggled adeptly by an American cast—are even thinner.

One of the biggest missed opportunities involves Stephanie Rahn, née Kahn (sweetly but wanly portrayed by Rana Roy). A half-Indian model and actress who had the distinction of being the first Page 3 girl, Rahn drifts through the play without much consequence, until a forced scene at the end, in which Graham tries to wring pathos out of her topless debut. Lamb is honest with Rahn about why they’re running nudie pics, admitting that he wouldn’t want his daughter to pose. Murdoch shows up disgusted, sputtering that Lamb has turned the two of them into pornographers. Lamb counters bitterly that papers are mere “chip wrapping,” disposable, whatever boosts circulation.

Rahn interjects: “I can’t throw this away. Stay here, go somewhere else, doesn’t matter, this is my life, now. To think after this, I’ll go and we’ll probably never see each other again but we’re linked in this now. Handcuffed together, for all time. Isn’t that funny.” If only Graham and that character earned that rather loaded line. How much more interesting Ink would have been had it followed Murdoch, Lamb and Rahn as three equal tracks making all of them fully dimensional, but the female side of the equation feels like a quasi-feminist afterthought.

Still, due to Goold’s brassy, athletic staging and a fine ensemble, Ink is never boring. Adam Cork’s walloping sound and Neil Austin’s noirish light design grab your senses; a trapdoor in Bunny Christie’s set (an avalanche of metal desks and file cabinets) gets a workout; and the demonstration of hot-metal printing methods comes across like a tour of Vulcan’s forgery. Still, too much of Ink wants to dazzle and seduce; it strenuously avoids passing judgement on what Murdoch’s revolution would bring about 50 years later, keeping its prime villain almost in shadow. The cover grabs you with buzz words, grisly photos, and 72-point screaming headlines. But turn the page, and you find yourself wanting more news, less flash. 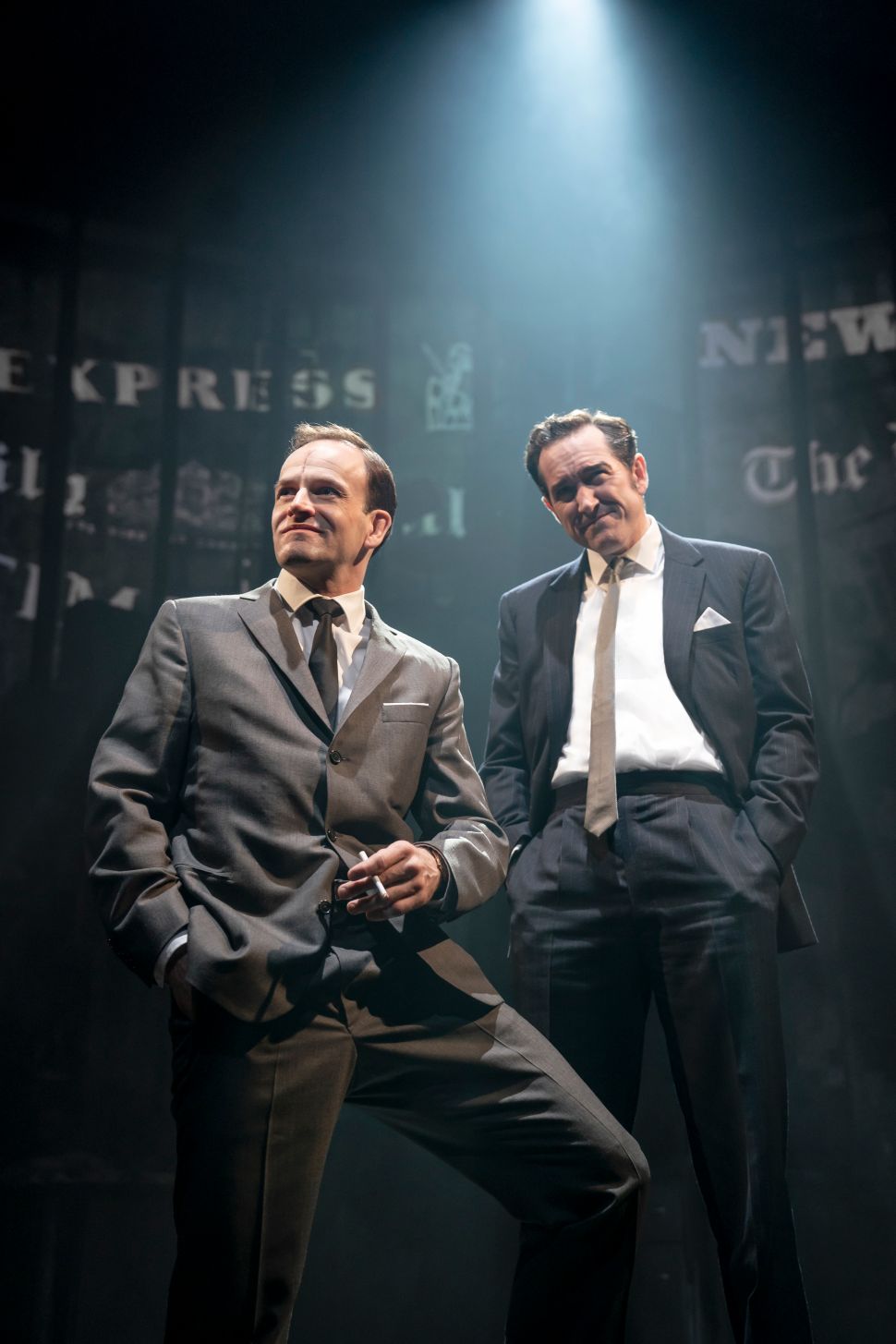