Today, a washing machine-sized spacecraft attempted what no other private-funded spacecraft has—a lunar landing. It was not successful.

The spacecraft, dubbed Beresheet (the Hebrew word for “the beginning”), was slated to gently touch down on the lunar surface sometime between 3 and 4 p.m. ET on Thursday. However, minutes before the expected landing, its main engine briefly lost power. Engineers were able to restart it, but they weren’t able to regain communication with the spacecraft.

“We had a failure in the spacecraft,” Opher Doron, head of Israel Aerospace Industry’s space division said over a livestream broadcast of the landing.

Beresheet fired its engines as expected, which slowed the vehicle down, taking it out of lunar orbit. All seemed fine as it began its descent; Beresheet even beamed back an epic selfie with Israel’s flag, and the moon’s surface as a backdrop.

Unfortunately, Beresheet was unable to stick its landing and most likely impacted the lunar surface. “We have not managed to land successfully,” Doron explained. “[But] we are the seventh country to orbit the moon, and the fourth to reach the moon’s surface. It’s a tremendous achievement up until now.”

That’s because historically only government space agencies have been able to shell out the cash it takes to get there. To date, only three nations have landed on the moon: the United States, Russia and China. But as the number of commercial launch providers grows and the cost of accessing space continues to drop, that could change.

The robotic lander was developed by SpaceIL, an Israeli non-profit, and designed for the now defunct Google Lunar X Prize program. The contest, which began in 2007, was created to challenge private companies with a task: land spacecraft on the moon without government funds. Unfortunately, the contest ended in 2018 when it became clear that none of the participants would meet the landing deadline.

But that didn’t stop SpaceIL. Even after the $20 million prize was off the table, the company continued to develop the lander we saw today.

They may not have had a successful landing this time, but @TeamSpaceIL has still made history. They will be the recipients of our first ever $1M Moonshot Award, in honor of their achievements and their milestone as the first privately-funded entity to orbit the Moon. 🌒 #moonshot pic.twitter.com/Val0rjkZNb

So how does one of the world’s smallest nations make it to the moon?

By calling an Uber, a space Uber. On February 21, SpaceIL’s lunar dreams sat tucked inside the payload fairing of a Falcon 9 rocket. It was joined by two other satellites, an Indonesian communications satellite called Nusantara Satu and an experimental U.S. Air Force satellite. The cosmic carpool was orchestrated by Spaceflight Industries, a company dedicated to matching small satellites with their perfect ride to space.

Ride-share programs are one way to mitigate the cost of spaceflight and enable more companies to get off the ground. SpaceX’s flagship rocket—the Falcon 9—has already proven it can send multiple satellites into space and deposit them in their proper orbits. But the private spaceflight company has never sent a payload to the moon. That is, until now.

But here’s where it gets tricky. Beresheet was not the main payload on the rocket, and therefore had to work with where SpaceX was able to place it. As such, it took the scenic route to the moon. After separating from the rocket, the lander spent seven weeks traveling through space, before it could even attempt a landing on the lunar surface. During its trek through space, the little lander swung around the Earth multiple times in order to gain the velocity needed to reach the moon. With each close pass, Beresheet fired its engines, stretching out its orbit in order to be in the right place at the right time to be captured by the moon’s gravity.

Due to extreme lunar temperatures, Beresheet’s mission was only expected to last two or three (Earth) days, during which the lander would use its onboard science instruments to measure the moon’s magnetic field and study nearby craters.

SpaceIL says that it spent $90 million to develop the little lander. And only about $2 million of those funds came from the Israeli government, the rest from private investors. (The majority of the project was funded by two major investors: Israeli entrepreneur Morris Kahn and the Adelson Family Foundation, a Los Angeles-based charity known for supporting Israel.)

Even though the esteemed title of “first private lunar lander” is still up for grabs, SpaceIL is incredibly proud of how far it got. “We didn’t make it, but we definitely tried,” Morris Kahn said during the live broadcast. “And I think that the achievement of getting to where we got is really tremendous. I think we can be proud.”

Today’s landing unfortunately wasn’t a success, but thanks to its onboard camera, Beresheet left us with a parting gift: one last view of the lunar surface. 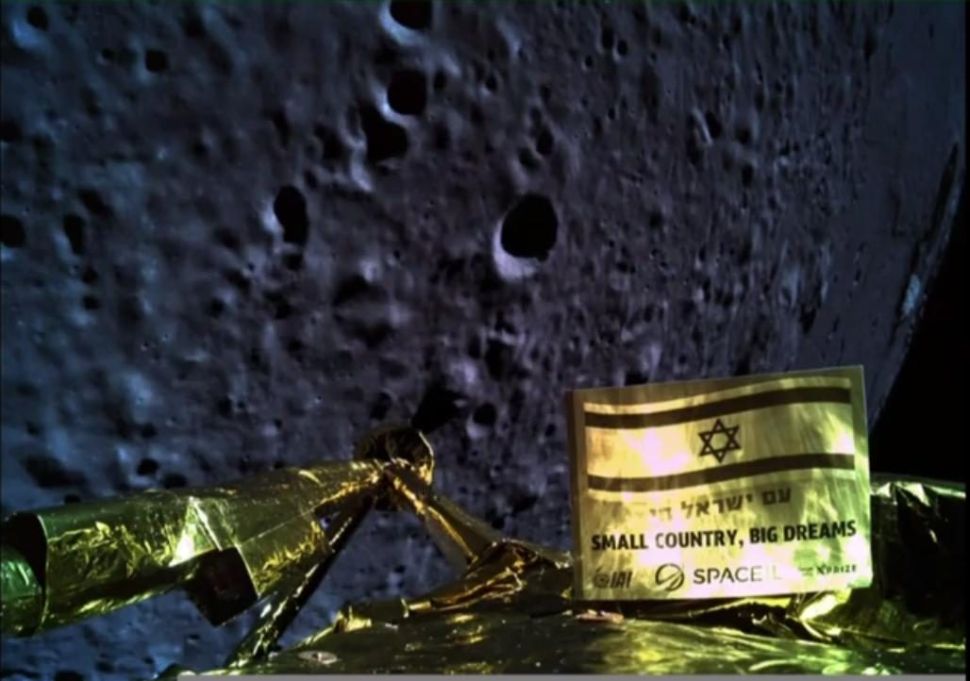