The most exciting two minutes in sports are just around the corner. The 2019 Kentucky Derby takes place on May 4 at Churchill Downs, and even though the actual horse racing is over in a flash, hordes of nattily dressed equestrian enthusiasts flock to Louisville, hats in hand, to catch the event each year, giving the city its moment in the spotlight.

If you’re off to the races—or even if you’re not bettin’ on the ponies and just want to check out Louisville for a long weekend—you’ll need a place to stay. Below, our top hotel picks for the fashion-conscious, mint-julep-sipping set.

If you want the whole Louisville experience—one that’s not just about the Derby—consider the 91-room 21c Museum Hotel, which opened on West Main Street in 2006. It’s made up of five converted 19th-century tobacco and bourbon warehouses and spans 9,000 square feet, offering plenty of space for the rotating exhibitions, installations and cultural programming it hosts throughout the year. The modern rooms and suites all feature custom-designed furnishings; red, purple and light blue accents; and Malin + Goetz products. The stay also offers a fancy fitness center and spa and an award-winning restaurant, Proof on Main, where you can pick from more than 120 types of Kentucky bourbon. Get ready for a hefty price tag, though—rates can be high this time of year. From $2,300 (three-night minimum for Derby week), 21c Museum Hotel Louisville.

The Brown Hotel is one of the most luxurious, tried-and-true accommodations in Louisville. Originally built in 1923, the hotel is now a member of Preferred Hotels & Resorts. Its 293 rooms feature handwoven throws, granite bathrooms and goose down comforters, though its standout is the Muhammad Ali Suite, named after the famous Louisville-born boxer. The one-bedroom is painted in gold and black tones and boasts a crystal chandelier, hardwood floors and signed memorabilia from the athlete, including photos and boxing gloves. Make sure to order a bourbon flight in the Lobby Bar, which pays homage to the hotel’s 1920s origins, and dine at the AAA Four Diamond English Grill for some authentic Southern cuisine. From $169, The Brown Hotel.

This downtown Louisville hotel in the Nulu area opened its doors just before last year’s Kentucky Derby race, and its close proximity to Churchill Downs makes it a trendy and convenient spot. The five-story hotel is composed of 156 rooms, and while they aren’t huge on Southern charm, they are sleek and modern, with wood headboards and leather accents, plus smart TVs and luxe European bedding. The Euro influences extend to the food, like the Spanish-inspired tapas served at the hotel’s AC Lounge. They pair perfectly with its handcrafted cocktails. From $269, AC Hotel Marriott Louisville Downtown.

The Omni Louisville celebrated its one-year anniversary at the beginning of March, and even though it’s a relative newcomer, it has quickly become a favorite. With 612 rooms and suites, it takes inspiration from the city, as evidenced by the local art in the lobby gallery and the Pin + Proof speakeasy, a nod to Louisville’s bourbon connection. Inside you’ll find a spa, fitness center and rooftop pool—oh, and the speakeasy has its own bowling alley. Guests can dine in either of the two restaurants, hang at the rooftop bar, lie low in the Library Bar, and scoop up groceries, coffee and gelato in the Falls City Market. From $2,100 (three-night minimum for Derby week), Omni Louisville. 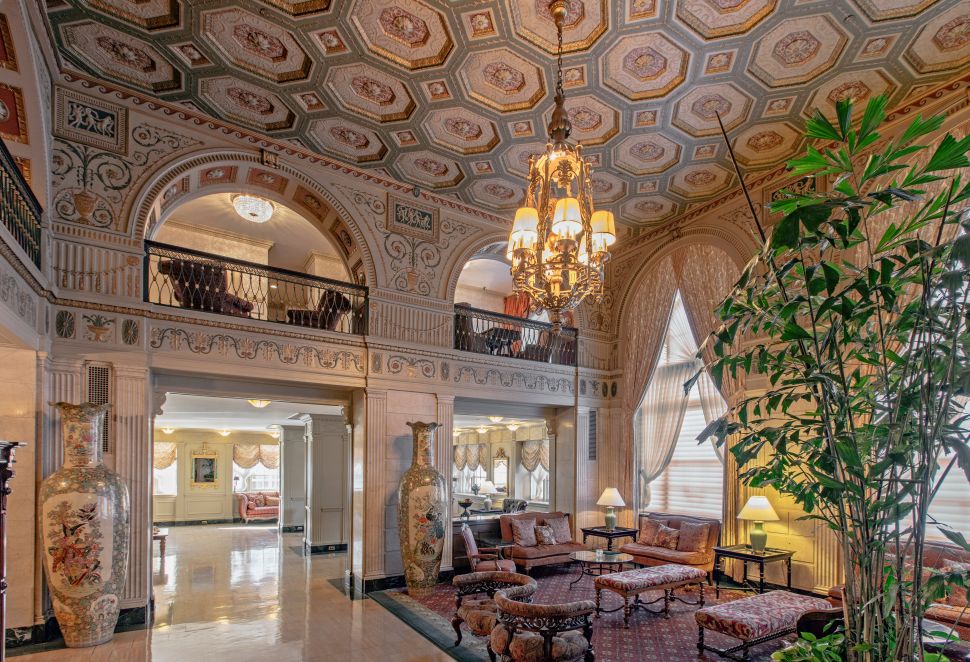