Even when a reviewer plans ahead (as we should, anyway), a season sometimes offers as many splendid surprises as a casual wander through a museum. Turn a corner in MoMA and, hey, isn’t that van Gogh’s Starry Night? Or you show up on Saturday evening for an unheralded Mozart revival at the Met and discover one of the season’s most precious jewels.

Not only is Mozart’s La Clemenza di Tito even starrier than the van Gogh canvas—all six leading roles are stunningly well cast—but it serves as a timely reminder of a couple of rock-bottom basic tenets of opera as theater.

First, the production by the late Jean-Pierre Ponnelle transforms the elegant tale of a high-minded Roman emperor into gripping, imaginative drama without in any way trivializing or distorting the text and music.

And beyond that, the Met has revived the staging (first performed here 34 years ago!) with skill and imagination. The blocking is precise and the performers have found a happy unanimity in their style of movement, which, as Ponnelle devised it, forms a sort of ironic commentary on the grand manner of classical tragedy.

As the magnanimous Roman emperor Tito prepares for a state marriage, the scheming princess Vitellia—thinking she has been snubbed—cajoles Sesto (her lover and Tito’s closest friend) into a murder plot. The most compelling aspect of the drama, though, is Tito’s Hamlet-like indecision on whether to punish the guilty parties.

Just as the artists embodied larger than life characters physically, so they all sang this demanding and sophisticated score with virtuosic transport.

Most brilliant of all was mezzo Joyce DiDonato as the anguished Sesto. She daringly imposed vast contrasts of volume and tempo upon the most famous aria from this score, “Parto, parto,” transitioning from an almost murmured slow section to a quicksilver conclusion. The elaborate triplet melismas were not only crystal-clear but achingly expressive of the character’s overwrought emotional state.

Soprano Elza van den Heever might have lacked a little of DiDonato’s instrumental precision, but she more than compensated with her aggressive, appropriately scenery-chewing attack on the role of Vitellia. She was not so much a villainess as a weapons-grade drama queen—as ferociously stagy as, say, Faye Dunaway might have been in The Favourite.

She hurled out both recitative and coloratura vigorously and even managed to indicate the sepulchral notes of her 11 o’clock number, “Non più di fiori” though she lacks an ideally firm chest voice.

In the title role of the merciful Tito, tenor Matthew Polenzani wedded ravishing Italianate tone to exemplary bel canto technique. Declamation, legato and even the fiendish scales in “Se all’impero” all sounded scrupulous yet spontaneous. If his acting felt blank, maybe that’s to the good: part of Ponnelle’s take on this noble melodrama seems to be that people with vast responsibility aren’t allowed to indulge in the luxury of personal feelings.

Amid all this grandeur, Lothar Koenigs’ robust, intelligent conducting admittedly sounded a little pedestrian. But maybe we’ll get a starrier and bolder leader when the Met gets around to a (most overdue) new production of this magnificent work.

What most delighted and moved me about the current revival, though, is that it so clearly recognizes and spotlights the political themes of Clemenza. Even in a season featuring a production of Wagner’s Ring that has been stripped of anything that might be considered consequential, the Met still can, on occasion, rouse itself to present opera as serious theater. 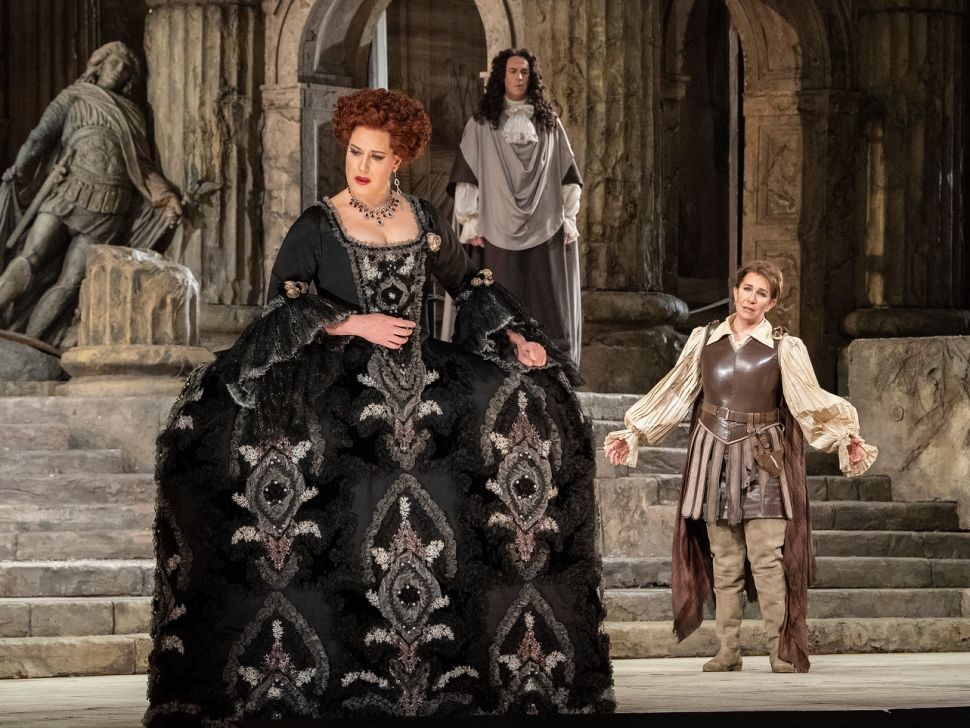