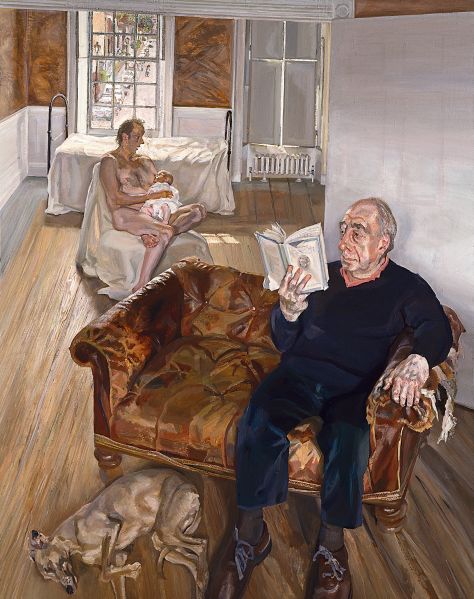 “If you like skin, you should find people that have a lot of it,” Lucian Freud said, according to the catalogue essay authored by Michael Auping for a show of the painter’s work opening tomorrow at Acquavella Galleries.

In most of the paintings in “Lucian Freud Monumental,” that’s what the artist did. Yet that’s not to say that Freud (1922-2011), the grandson of Sigmund Freud, didn’t place less care and attention on what surrounded the person in his gaze. Often taking twelve months to complete, with the subject sitting whenever Freud painted, these huge portraits capture even the exquisite detail of the floorboards, for example, in a painting of the performance artist and nightclub personality Leigh Bowery, who became a frequent model for the artist.

Also depicted in two paintings on view is David Dawson, a painter and Freud’s assistant for two decades. Dawson organized the show at Acquavella Galleries with William Acquavella. Both pictures show the slim, nude Dawson with a whippet—one with the skeletal dog in his arms, the other with it in his lap. (A third picture puts Dawson’s head on the body of a woman nursing a baby.) Lucian Freud was not just about masses of flesh.

Observer spoke to David Dawson about working for and posing for Lucian Freud.

Observer: We’re standing here at the far end of the long gallery on the first floor at Acquavella Galleries. On the wall is a huge 1990 portrait, eight feet high, of Leigh Bowery, sitting in what looks like a velvet chair that’s too small for him. This was the first painting by Lucian Freud that you ever saw, in the flesh, as it were. What was that experience like?
David Dawson: That took my breath away. It made all of the hairs on my arm and my neck stand on end. It’s the first painting he ever did of Leigh. From then on, I saw every single painting being made, because I was with Lucian every single day.

How did you first meet Lucian Freud?
Through James Kirkman, who was Lucian’s dealer at the time. I’d just graduated from the Royal College of Art. A professor there set me up, without my really knowing I was being set up, as a part-time assistant to a dealer, four mornings a week, a run-around boy. Straight out of art school, I thought it was a good way of getting to know who the dealers were.

The Leigh Bowery paintings hadn’t been seen by anybody then. Lucian really had jumped at that point to the physical scale of the canvases.

I was thinking of coming over to New York, where you had Julian Schnabel and David Salle and Brice Marden. The buzz was over here, in America. So when I saw that painting of Leigh Bowery, I said, “Hold on a minute. This is really serious, something important is going on here. The quality of it, the visceral truth of what a portrait can be. This is serious. I’m hanging around. I won’t find better painting in New York.” Part of the buzz of New York was the hype. It was Schnabel, it was that whole excitement.

I made the right choice.

You then worked for him for 20 years, seven days a week. Most caregivers don’t even spend that much time with a single person.
Yeah. But we got on very well. He was good company. And he actually was interested in other people. That’s why he was a good portraitist. I think that’s what he brought to portraiture in the twentieth century. 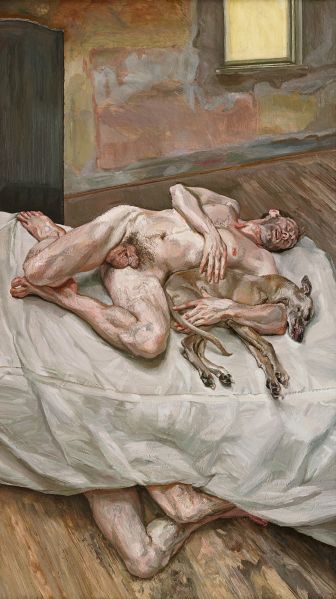 How did you end up being the subject of his first painting of you, Sunny Morning—Eight Legs, 1997, where you’re lying on a bed with a whippet—his whippet
I was with him for six years, and then one morning he just said, “Oh, I’ve got an idea for a big painting with you. Would you sit?” I just said, “Clothes on, or off?” He went, “Off.”

So we started that day.

It lessened the time that I had for my own painting, although I did have the afternoons off. But I really wanted to watch him paint.  He would close the door to his studio when he painted other models, and I wanted to see how he made these paintings.

He worked from a very small area and built out.

And that small area he starts from is brought to quite a high level of completion. And then it moves, and it gets bigger. Nobody else paints like that.

And Pluto, his pet whippet, is in that painting with you. The picture also has your legs under the bed where you’re lying unclothed. Did that seem strange, to have another set of legs there?
It was actually my idea. Because of the shape of the canvas, there was this big area below the bed that was fairly empty. It didn’t help that painting. It needed some life in it. We tried leaving my clothes there, but that was too contrived, too dull in a sense. Because I knew that Lucian came out of the Surrealist period—he was brought up through Surrealism—that sort of strangeness is in his humor. So I said, “It would be funny if I had a pair of legs, instead of my trousers, on the floor.”

These long sittings, over twelve months, alone in a room with a painter, are the antithesis of the accumulation of digital information.  It’s a different kind of experience. It’s a challenge for people immersed in the instant digital world to understand how extended time and extended looking deepens your understanding of what you’re painting.
Over the years it will become more and more important how different Lucian’s idea of looking is to everyone who believes in filmic Instagram moments and YouTube. 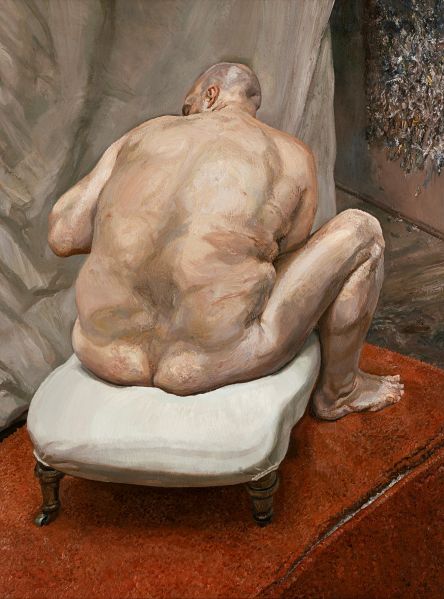 Let’s talk about his paintings of well-know people. What about the Queen, whom he painted in 2001? It’s anything but monumental, 9 by 6 in. How did that happen?
He painted the portrait of Robert Fellowes in 1999, who was, at the time, the Queen’s secretary, and he had a certain admiration for the Queen. They had spoken about how she would sit for the portrait, and they were planning to have her come to the house, to the studio to sit. The press got word of it, and we closed it down for two or three years. You would have just had press outside your front door, which would have been horrendous.

Then we did a little portrait of John Richardson [the recently deceased biographer of Picasso]. I bought the canvas for that in New York for Lucian to try—it was only a small little canvas. And that gave Lucian the sense of practical reality that “I could paint the Queen in a certain amount of time, because I tried it out with John.”

John did nine days solid [for his portrait], and then we had twenty sittings with the Queen.

Where were those sittings?
In St. James’s Palace, in a room that was very discreet. The Queen could come through Clarence House. We could turn up at the palace, jump out of the car—we’d go in, no one knew. It was all completely done quietly, without any fuss, and then the painting was made.

Was that just Freud and the Queen, in the room?
There would always be a courtier with the Queen, because the Queen can’t be left in a room on her own.

I’d go in, set up the easel, set up the paints, wait for the Queen to arrive, do my bowing, and then come in two hours later to collect Lucian.

Did the Queen enjoy it?
I think she rather enjoyed his company. They were of the same age, so they did know people in common. They loved horses, so they had a lot of horse talk.

Tell us about his painting of Kate Moss, from 2002.
They really got on. He’d read in an interview that Kate said she wanted more than anything to be painted by Lucian Freud. And he said, “Oh, I like that.” And Bella Freud, his daughter, is a fashion designer. She knew Kate. 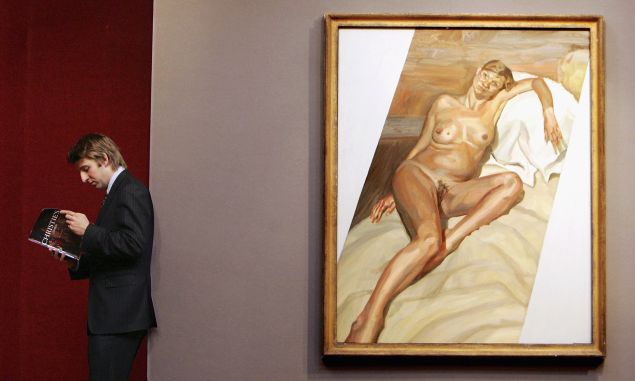 Here we are at a show of monumental portraits. Freud was a figurative painter. How did he feel about abstract art?
Lucian only did what he believed in. He thought abstract art was a valid and brilliant moment, but that it had already gone. He thought Pollock had something quite brilliant about him.

Having spent so much time with a portraitist, do you make portraits?
No.  What I got out of Lucian was an honesty and knowing something about yourself. Paint what you know. Since I was brought up on a farm, I have a strong connection with the land, more than with people. I go back and paint that. 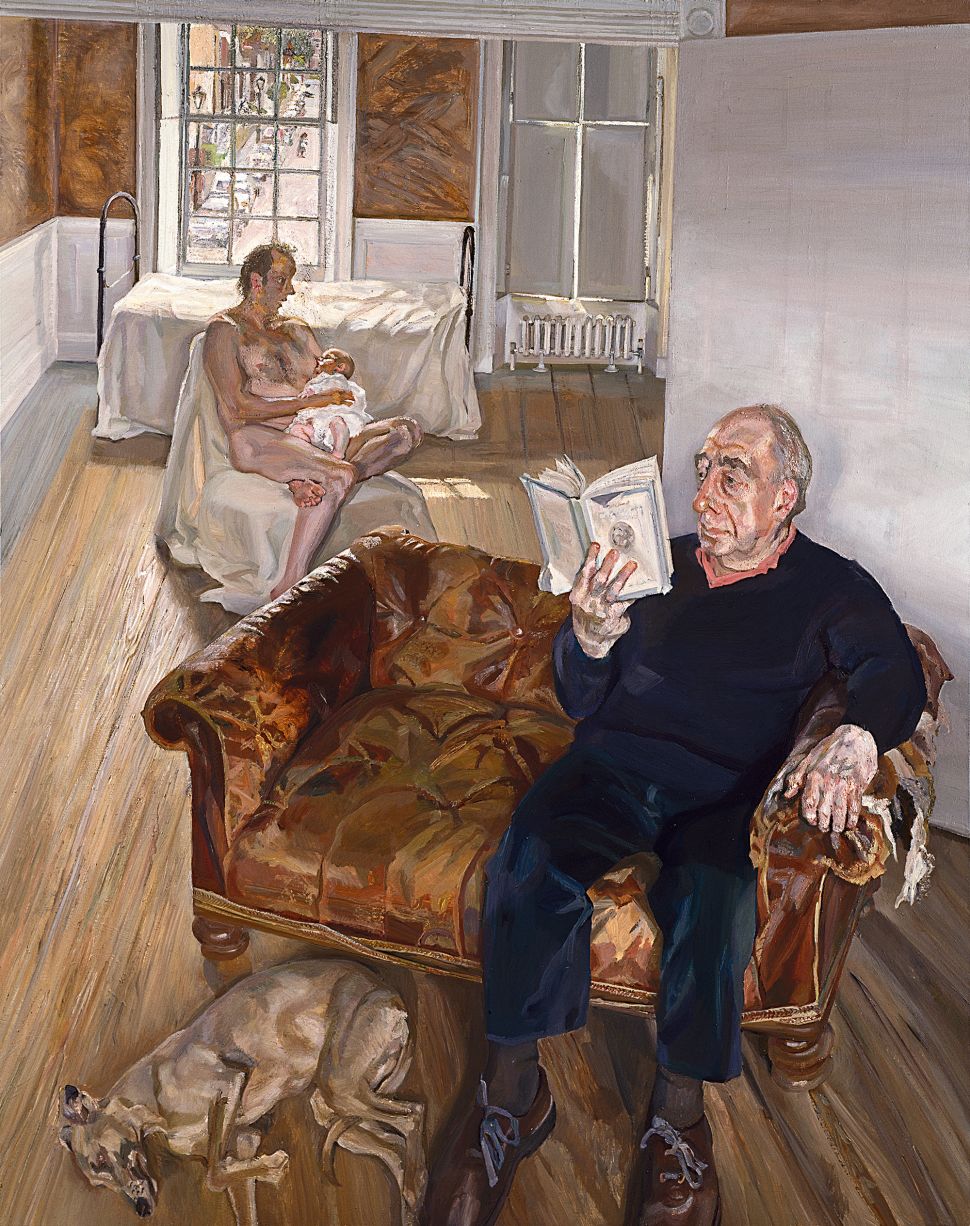