You’re in an unfamiliar room with strangers. They may not speak right away, but when they do, they ought to explain who they are and why you should care. That’s theater, essentially. The Mad Ones complicate that pact with audiences. In their meticulously researched period dioramas, they parcel out social-historical clues (often from the 1970s or ’80s) and take their sweet time revealing what the heck is going on. Conventional plot, character development and catharsis are chucked out the window; instead, you watch group dynamics and a slow burn to conflict.

Not that Mad Ones shows are totally opaque. In the opening minutes of the engrossing, hilarious and ultimately sobering Mrs. Murray’s Menagerie, we get that it’s a focus group in which six parents are being quizzed about their kids’ favorite TV show. The year is 1979 and the location is a community-center rec room in Philadelphia. The program under scrutiny is Mrs. Murray’s Menagerie, a popular program hosted by an African-American jazz singer who shares her home with puppets: Mister Rogers’ Neighborhood meets Ella Fitzgerald.

As the adults free-associate their impressions of the show’s elements, cracks begin to form in the polite neutrality of the group. Two spinoff shows—one featuring bratty Candace the Bunny, the other funky-fresh Teddy—start to reveal racial and gender assumptions among the parents, albeit filtered through the goofy signifiers of kids’ entertainment. Is that sprig of hair under Teddy’s baseball cap “bear hair” or an “afro tuft”? Cici, who is black, pointedly asserts that Candace the Bunny is white, but Roger, color-blind when it suits him, disagrees. When an angrily defensive Roger calls Cici “honey” and pats her leg, it’s like a bomb went off in the room.

Now, don’t expect anyone to deliver an impassioned oratory about white privilege or how parents let TV raise their children. Leave that to regular, preachy theater. The Mad Ones capture the unsaid. They create shows collaboratively, using improv as well as research to arrive at these fully dimensional but still weird windows into the past. They’re also drawn to institutional procedure in the most painstaking, granular way. In 2016, Miles for Mary dropped us into interminable high-school faculty meetings, with the internecine power struggles of teachers alternating with dreary rules of order. So it’s not a critique to say that yes, you will start to get goddamn sick and tired of Dale’s endless drilling-down as to whether or not Candace is “whiny,” “innocent” or “naughty.” Director Lila Neugebauer ratchets up the tension in the room (built to practical-banal perfection by You-Shin Chen and Laura Jellinek), expertly layering the drone of questions and answers under the shifting allegiances and animosities of the focus-groupers.

As the piece unfolds, you get the sense that the creative team is playing with stereotypes, reinforcing some while undermining others. (Ásta Bennie Hostetter’s costumes gesture at class without condescension.) Gloria’s passing remark about absent parents implies she may come from a low-income, or at least broken, home. Basic-white-guy Roger acts entitled and sexually creepy with women. African-American Cici and Ernest are both warm, sensible and tolerant, while the white, blue-collar Wayne is surprisingly laid-back and open-minded. Even writing these descriptive lines makes me check my own unconscious biases, but that’s how—on the surface—the characters come across. The piece invites us to play sociologists behind the fourth wall. We don’t know these people’s families or inner lives, so maybe we’re projecting our own issues. And with actors this good (they all are), the guessing-game is a nifty moving target.

By the inconclusive and skeptical end of Mrs. Murray’s Menagerie—Ernest, last to go, fills out a questionnaire but tosses it in the trash—you wonder what it was all about. I’ll spitball: on the eve of the Reagan Revolution, children’s TV programming shifts from liberal multiculturalism to lowbrow, pandering content; or, in 1979, race relations and feminism were teetering between progressive and retrograde; or, we just watched a pre-Internet fable about the origins of the crowdsourced, data-mining algorithms that have leveled and commodified culture, parenting and identity. I don’t know the answer. Take your pick! One’s thing’s sure: The Mad Ones make pressing your nose against the glass a voyeur’s delight. 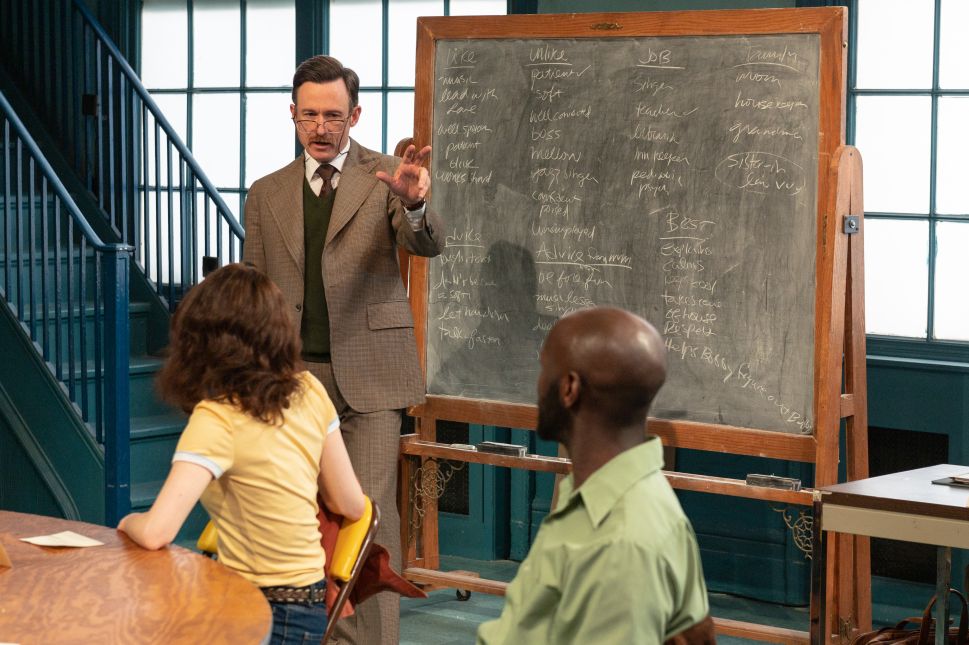