It’s hard to believe that a little more than 50 years ago, Matera was the “shame of Italy,” its cave-dwelling citizens living in abject poverty without electricity or running . Today, with its new designation as a European Capital of Culture, it’s Italy’s pride. Decades of polishing this diamond in the rough have revealed one of the world’s most fascinating destinations—a veritable gem anchored by the Sassi di Matera, a UNESCO World Heritage Site made up of prehistoric caves.

The magical arch of the Italian boot is no longer going unnoticed. In the coming months, Matera is set to attract a record number of visitors. Whether you’re traveling there in this special year or not, our guide has all the highlights for experiencing the charming City of Caves above and below the surface.

As 2019’s European Capital of Culture (a shared designation with Plovdiv, Bulgaria), Matera has a jam-packed schedule of thematic events, exhibitions and concerts planned over the next 365 days. Take advantage of the festivities by getting an all-access Matera 2019 Passport in advance for just €19 (around $21). The program is anchored by I-DEA, a yearlong curation of art and artifacts that dives into the history of the region, and the Open Design School, which is described as a “living lab of interdisciplinary experimentation.” With more than 800 artists on showcase throughout the year, you’ll want to review the calendar to help build your cultural itinerary.

You don’t have to be a backpacker to appreciate its cave hotels.

As a part of Matera’s glow-up, uniquely enchanting hotels are being built into its ancient stone caves. At the nexus of understated luxury and artisanal character is Sextantio Le Grotte della Civita, an Albergo diffuso of 20 candle-lit rooms with sumptuous Philippe Starck bathtubs. Lighter on the wallet, L’Hotel in Pietra is a no-brainer for its elegantly appointed rooms inside a converted 12th-century Benedictine church. If you find the summertime heat too oppressive, the lofty suites and infinity pool at Masseria Fortificata San Francesco in “modern” Matera is a breezier option that’s just a five-minute drive from the Sassi.

Time-travel to the Sassi’s (not so glamorous) past.

There’s evidence that Matera’s Paleolithic caves have been continuously inhabited for more than 10,000 years, making it the third oldest city in the world. Families lived in these über-rustic quarters until 1952, when conditions became so unsanitary that the Italian government forcibly relocated all citizens to modern developments. Most Matera residents still live in the “new” district up the hill from the ancient Sassi, but you can head to Casa Grotta di Vico Solitario for a recreation of a 1950s cave dwelling, complete with original furniture, kitchen gadgets, agricultural tools and photographs from this forgotten era.

It makes sense that the Sassi’s limestone streets served as a filming location for Mel Gibson’s The Passion of the Christ—ascending and descending the stone steps through Matera’s undulating landscape is a near-religious experience. Don’t miss frescoes from the Middle Ages hidden inside the Rupestrian churches of the Barisano district. With a combined ticket, you can enter the most famous ones carved into the cliffside: Santa Lucia alle Malve, Santa Maria de Idris and San Giovanni, and San Pietro Barisano. Take in the view of the below ravine, then gaze across it to spot abandoned caves settled millennia ago.

Mix in some contemporary stuff with the antiquity.

The Museum of Contemporary Sculpture of Matera (MUSMA) celebrates the juxtaposition of the ancient and the modern within the seven cave rooms of a 16th-century Palazzo. Exhibitions feature both Italian and international sculptural works made from glass, wood and other raw materials. Some are from today; others date back to the 1800s.

Sample the rustic delights of the Basilicata region.

Historically one of Italy’s poorer regions, Basilicata offers a culinary tradition rooted in simple recipes designed to fill a stomach on the cheap—but that’s not to say they aren’t delicious. For lunch, head to Soul Kitchen, a cave restaurant popular with locals, for Chef Pietro’s irresistible potato ravioli and chicory dishes. Steak lovers should mosey down the pedestrian Via del Corso to Osteria San Francesco, a contemporary family-owned restaurant across the baroque Piazza San Francesco. And Kapunto is excellent for all types of pastas, made fresh daily with homemade sauces and straight-from-the-market ingredients like zucchini flowers.

Shop for ultra-local souvenirs your friends will actually like.

As you’d expect, many of the shops in the Sassi are in caves, too. If you’re of the opinion that the best souvenirs are edible, zip over to Peperoncino Matera for a wonderful selection of small-batch gourmet treats from Basilicata, like wines, jams and savory sauces. On the weekends, the Central Market is also a great place to seek out treats from local vendors. For original handicrafts and decorative arts, your next stop should be Feelosophy, where all the goods are made from raw materials with zero carbon footprint.

If you’ve rented a car, hit the road toward the southern coast to the Metaponto Archaeological Museum. Considering its location in quiet Metaponto, the museum’s collection of locally excavated relics is a surprisingly comprehensive lesson in the area’s history, from its indigenous population to the Ancient Romans. After that, drive about 10 minutes farther on the autostrade to the Tavole Palatine Greek temple, built in the 6th century BC.

Think beyond wine, and order a cocktail in a cave.

While you can secure a solid glass of wine almost anywhere in Italy, finding a superb cocktail can take a bit more work. Order a round of glowing-red Negronis at Area 8, a multifunctional cave bar with a patio that buzzes with a younger crowd on warm nights. Shibuya is another gastropub that has mastered the art of cocktail making, offering casual nibbles like pizza and pigs in a blanket alongside its martinis. 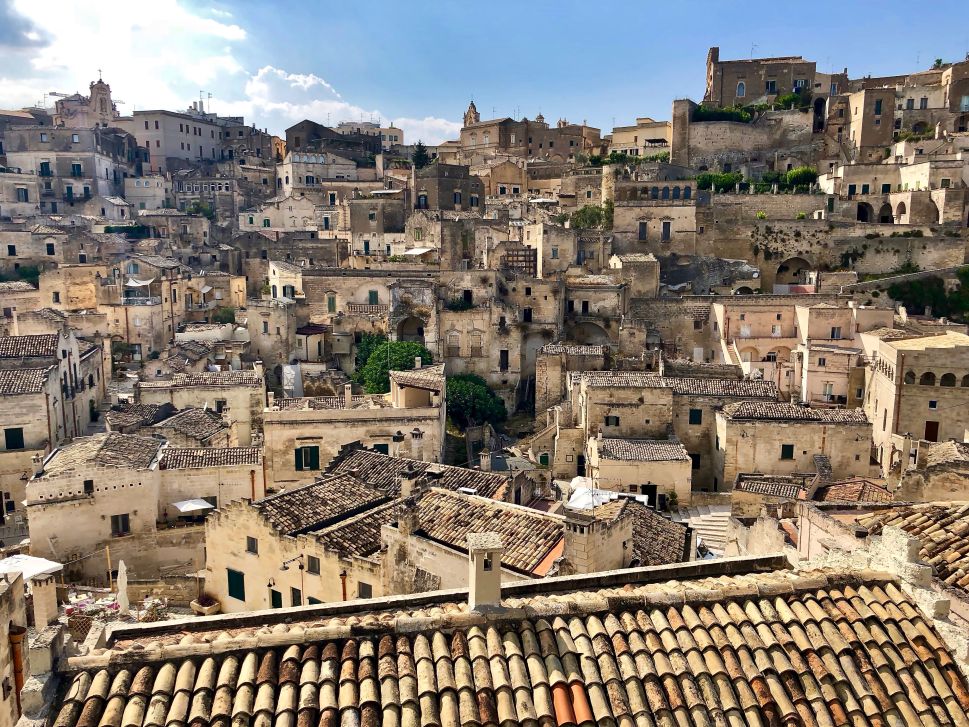