A hilly, residential Staten Island neighborhood is where Max Shustovskiy, an immigrant from Siberia, designs and handcrafts eyeglasses. A house with a steep staircase is the headquarters for Shustovskiy’s company Bird & Cage, a one-man operation that makes handcrafted eyeglasses, from start to finish.

He shares the home with his wife, Gala, a dog and a cat. Pieces of machinery—small drills, a jeweler’s hot press, various sanders—are scattered around the home office, kitchen, back porch and basement, there’s even a make-shift studio for photographing his frames on the top floor. Shustovskiy can be seen designing at his desk or parading around the machines in a maroon suede apron and a white head device with magnifiers.

Bird & Cage was launched in 2014. The designs are reminiscent of those popular in the 1960s, worn by Yves Saint Laurent or Marcello Mastroianni, but with a contemporary touch. Nearly all of Shustovskiy’s chunky frames are made of buffalo horn, a naturally luminous, striated material.

The frames are not cheap. Ready-to-wear frames start at $1,500 and are sold at high-end boutiques like Selima Optique in New York City. Shustovskiy’s custom eyeglasses cost more.

Amid walls in dark, rich hues, on massive leather sofas, Shustovskiy with his wife Gala, who sometimes helps with Russian-English translations, explained why he immigrated to New York City in 2003, how his Soviet-era skills help him produce eyeglasses today and how actor Samuel L. Jackson began wearing Bird & Cage frames.

Why did you start handcrafting glasses and launch Bird & Cage?
I had been working at Alain Mikli making lenses as a lab technician. When Alain Mikli was bought by a conglomerate [Luxottica in 2013], I decided to go out on my own.

Oh, was that scary, to suddenly be an entrepreneur?
No, I had already been thinking of doing something else. I was a little tired of cutting lenses. Now, my focus is the frames, not lenses. However, I sometimes make lenses for particular clients.

Samuel L. Jackson wears your eyeglasses, how did that come about?
I cut his lenses at Alain Mikli, we had a good, professional rapport. After I left Alain Mikli, through his assistant, I was eventually able to show him my new collection. I had two trays, maybe 36 pairs of glasses. We [with Gala] were thinking he would maybe like one pair. But he said, “Oh my God, I like them so much,” when he tried on a pair. He ended up picking 12 pairs. We could not have even imagined this would happen.

Backing up, you grew up in Siberia?
I grew up in Omsk, Siberia. It’s close to the Kazakhstan border, relatively speaking.

Did you study eyeglass construction there?
No, I studied engineering. But it was the 1990s, a very crazy time because of perestroika. I had to stop studying and start working to earn money to support my younger brother, mother, grandmother. Studying at the university was not feeding the family.

At that time, factories started to close, manufacturing stopped and all engineers, people with advanced degrees, didn’t know what to do. My father gave me some advice, “Just take a specialization that will let you survive. Hopefully, times will change and then you can figure out what to do.”

People need glasses all the time.

A pragmatic decision.
Yes, I got a job at the first private optical store in the city.

This was post-perestroika?
Of course! You couldn’t do it before; all optical stores were government owned. I learned how to cut lenses by hand, sanding the edges on a wheel. dripped on that stone, so I had to wear a huge costume to protect myself from all the flying debris.

Nowadays, if you go to any optical store, you cannot find a person who can cut lenses by hand, it’s all done by machine.

Did learning the basics of lens making help you with your current business?
Absolutely. People like me, we know the business, from A [to Z]. If I know a person’s prescription, then I know which frames will not work at all. If a client wants bespoke frames, I can design the frame that will fit them best, whether it’s thickness of the lenses or the shape of the face or the nose.

Are you the only person in New York City crafting eyeglasses by hand?
There is one other guy making glasses, he is originally from Tennessee. I think he recently moved here.

Many of your glasses are made out of buffalo horn.
It’s a beautiful material. At first, I tried making glasses from African wood, but after experimenting with horn, I kept working with that. Since it’s natural, each pair of glasses has its own unique pattern. You don’t know what colors may appear during work, so results vary. It’s sourced ethically from meat factories in India; the horns are considered waste, a byproduct, they’d be thrown out. I also use acetate, or the two materials combined.

Right now, Bird & Cage is just you, sometimes Gala. Are you going to eventually ramp up Bird & Cage production?
No. I would have to hire people, produce a line… get robots that can make a lot of frames. I earn enough money to live now, and I’m doing what I like. I can’t become super rich doing this, never.

Oh, refreshing. Everyone wants to “scale,” manufacture cheaply, quickly mass produce, offer lower priced products, make money. I’m thinking Warby Parker.
There are so many glasses in the world, why do we want to add more? We can’t forget that glasses are a resource of the earth, we don’t want to just waste it. And you can see some imperfections in my glasses, people love that because the frames are alive, they are real. If I go to a party and someone has the same pair of frames, they are still going to be a little bit different.

Why did you immigrate to New York City in the first place, was it the draw of capitalism?
No, because when I moved here, I already saw the first steps of capitalism in Russia. And it wasn’t a pleasant story, a lot of crime and corruption. When I was kid growing up, education was free, medication was free. I wouldn’t say I’m a communist or socialist, but I have good memories of that time.

I really wanted to live in New York because it’s the capital of the world and I believed that I would be able to fulfill myself at least partially in America. All the people with crazy minds [laughs] come here, I wanted to experience that! I loved the Doors, Jim Morrison, when I was a kid, also The Velvet Underground, Bob Dylan, Miles Davis.

I fell in love with New York right away. It’s a beautiful city, you see industrial parts, modern buildings. The only shocking part—why would you put garbage on the street?

You didn’t really know anyone here, so that must have been a little scary.
No, I mean, there were some unknown parts, but I survived the collapse of the Soviet Union. I thought, if I survived that, I’d probably be able to survive New York City. 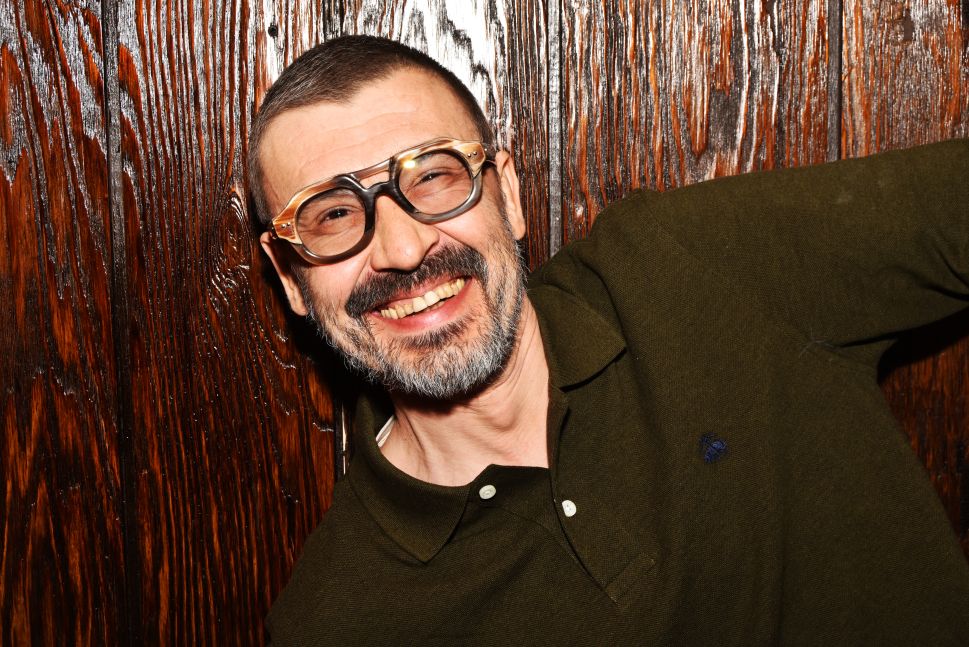