If you thought Frogmore Cottage was a big move for Prince Harry and Meghan Markle, you’d better prepare yourself for their next relocation. The Duke and Duchess of Sussex, who are expecting their first child any day now, are debating taking a major trip in the future, and it will be a significantly longer commute from London.

Prince Harry and Meghan are considering a six-month visit to Africa, said royal reporter Rebecca English in the Daily Mail. The Sunday Times first reported that the Sussexes were thinking about a two- to three-year stay there, but English claims it’s more of a sabbatical and a “likely scenario” that could occur sometime in the next few years.

Buckingham Palace did not deny that the couple might head to Africa at some point, instead releasing a statement. “Any future plans for The Duke and Duchess are speculative at this stage,” tweeted royal correspondent Richard Palmer. “No decisions have been taken about future roles. The Duke will continue to fulfill his role as Commonwealth Youth Ambassador.”

The plan is very much still in the brainstorming stage, but apparently Prince Harry has wanted to embark on a foreign sabbatical for some time now.

The news has inevitably added fuel to the rumors of tension between Prince William and Kate Middleton and the Sussexes, though it would be quite a stretch to say that the Duke and Duchess of Cambridge are the reason Prince Harry and Meghan would run off to another continent.

It’s not clear where in Africa the Sussexes would move, though we assume it would be one of the Commonwealth countries. Prince Harry and Megan are particularly fond of Botswana, as it’s where they went on one of their first trips before announcing their engagement. Prince Harry, who has called Botswana his “second home,” even sourced a diamond for Meghan’s engagement ring from the country.

Today is #earthday – an opportunity to learn about, celebrate and continue to safeguard our planet, our home. The above, Their Royal Highnesses in Rotorua, New Zealand. Of the 170 different species originally planted in the early 1900’s, only a handful of species, including these majestic Redwoods, remain today. Next, we invite you to scroll through a series of 8 photos taken by The Duke of Sussex©️DOS sharing his environmental POV including: Africa’s Unicorn, the rhino. These magnificent animals have survived ice ages and giant crocodiles, amongst other things! They have adapted to earth’s changing climate continually for over 30 million years. Yet here we are in 2019 where their biggest threat is us. A critical ecosystem, Botswana’s Okavango Delta sustains millions of people and an abundance of wildlife. Huge bush fires, predominantly started by humans, are altering the entire river system; the ash kills the fish as the flood comes in and the trees that don’t burn become next year’s kindling. Desert lions are critically endangered due partly to human wildlife conflict, habitat encroachment and climate change. 96% of mammals on our 🌍 are either livestock or humans, meaning only 4% remaining are wild animals. Orca and Humpback whale populations are recovering in Norway thanks to the protection of their fisheries. Proof that fishing sustainably can benefit us all. Roughly 3/4 of Guyana is forested, its forests are highly diverse with 1,263 known species of wildlife and 6,409 species of plants. Many countries continue to try and deforest there for the global demand for timber. We all now know the damage plastics are causing to our oceans. Micro plastics are also ending up in our food source, creating not just environmental problems for our planet but medical problems for ourselves too. When a fenced area passes its carrying capacity for elephants, they start to encroach into farmland causing havoc for communities. Here @AfricanParksNetwork relocated 500 Elephants to another park within Malawi to reduce the pressure on human wildlife conflict and create more dispersed tourism. Every one of us can make a difference, not just today but every day. #earthday

This potential sojourn is still a long way off—the couple likely wouldn’t relocate until at least a year after their baby is born—but perhaps the Sussexes are giving the rest of the world a few clues with their new Instagram account: SussexRoyal has already shared a few snaps from Botswana, including a previously unseen photo of Prince Harry and Meghan on their first trip there. 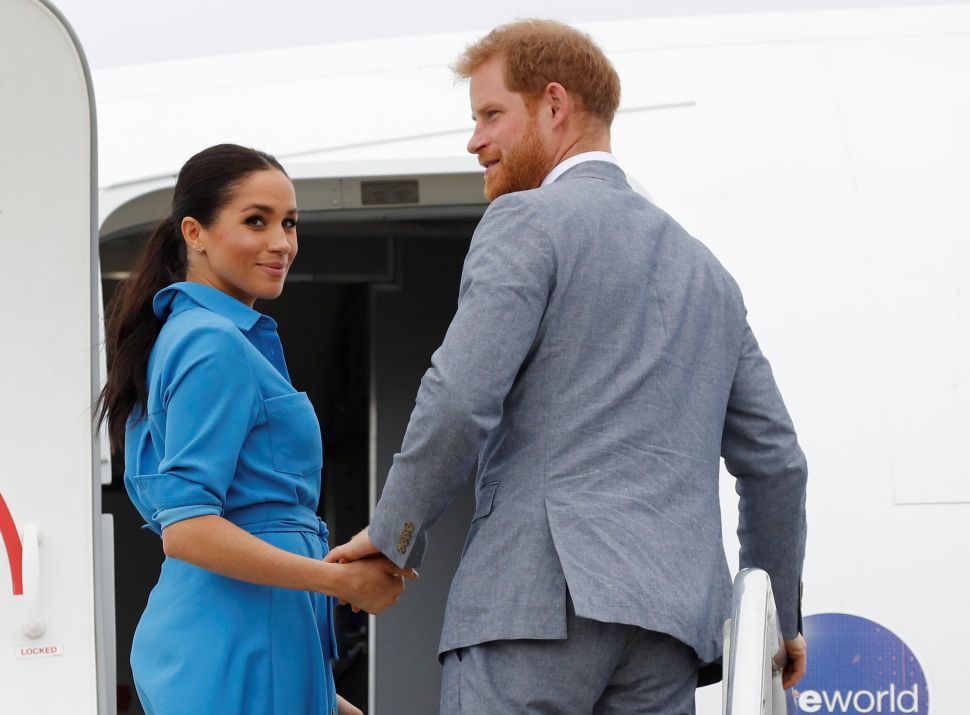