He had the last word in The Book of Mormon (“I still have maggots in my scrotum!”) and the first line in Something Rotten (as the campy Minstrel singing “Welcome to the Renaissance”) and yet, most theatergoers don’t know Michael James Scott. He belongs to the vast, sequined tribe that keeps Broadway going: troupers. In his early twenties, Scott understudied Ben Vereen in the national tour of Fosse, and has toiled in ensemble roles in numerous shows, some hits, some flops. The triple-threat performer has been working constantly since the Bush Administration, just not in roles that got the spotlight.

All that has just changed. In Disney’s global hit Aladdin—which just celebrated its fifth year on Broadway—he has found a role perfectly suited to his capacious bag of showbiz tricks. Scott has played the manic, mercurial, wish-granting Genie on multiple continents—in Australia, in London, in U.S. national tours—but for the first time, he’s doing it on Broadway. From now through mid-September, Scott has his star on the Great White Way.

The Broadway myth that a chorus kid, given the right break, can be suddenly transformed into a star is just that: a myth. Sure, it happened for understudy Shirley MacLaine in 1954 when she went on for the injured lead in The Pajama Game, but the reality is more complex. You pay your dues, you do the work, and you wait for luck to strike. Scott has the talent and he has the drive, but most important: he has patience. He chatted with Observer about his career and what it’s like to be riding a magic carpet to “a whole new world.”

Observer: You were—what?—11 when the Aladdin movie came out? Disney’s target demo.
Michael James Scott: I loved the movie growing up and, in fact, I did my first tap solo to “A Friend Like Me.” Since I grew up in Orlando, Florida, I’m such a Disney kid, so that element really makes it kind of cool.

You studied singing and dancing at the Broadway Theatre Project with great teachers—Ann Reinking, Gwen Verdon, Ben Vereen. What was the most valuable lesson?
I was very lucky to study with Gwen right before she passed away, and to this day I don’t really believe that actually happened! I think the biggest lesson to me was this truly old-school work ethic they all had. You’re never, ever done learning. You’re always ready to learn from everyone around you, so just be a sponge. Also: Give your all, every time.

With a role like Genie, it looks like you have to give 200 percent.
You’re constantly maneuvering the energy of it and figuring out the way, because you can go so hard so fast—which can take you to a place you might not want to go right away.

You have to pace yourself.
And also make it look like you’re not pacing yourself!

Fans know the Genie as Robin Williams, and now Will Smith will be in the live-action version in late May, and James Monroe Iglehart won the Tony for his Genie on Broadway. How is your Genie different?
The cool thing is, I’ve been able to take from all of them. I’m inspired by all the greats: Fred Astaire, Sammy Davis Jr., and the whole soft-shoe tradition. For me, I have that song-and-dance-man thing. I also bring a little sass to the Genie.

Speaking of sass, you were so delightful as the arch Minstrel in Something Rotten. How did that show figure into your career?
There was this element to Something Rotten that it just came out of nowhere. I did an early reading, and I thought it was absolutely brilliant, such a fun take on that era. Also, it was an original show, not adapted from a movie or a book. To be the first person to sing “Welcome to the Renaissance,” then to get the role was a dream come true for this Broadway theater nerd.

And you had been in Aladdin before that, when it opened?
I was originally the standby for the Genie, and I was there for a little bit less than year. And Casey Nicholaw, who directed Aladdin and Rotten, said to me, “We’d love for you to do this,” and I thought, “Open a Broadway show with a big, ridiculous number? Why would I not do that?” Then right after Something Rotten I played Genie in Australia.

How long were you in Australia?
For 18 months. Australia is an incredible country that I will forever hold dear to my heart. The people there were just so wonderful, the country really embraced the show. They were waiting for the show, you know? They all knew my résumé before I got there. I was like “How do you know this in Australia?!?”

And at least one of your loved ones is Jeremy Merrifield, a film director? You two are engaged?
Yes!

A showbiz couple. You’re an actor, he’s a director. Are you always saying, “Put me in the movie”?
I love him as a director and think he’s insanely talented. I definitely chat with him about his opinion—and even if I don’t want it, he’ll just give it to me anyway! It would be fun to do a movie together and collaborate, but it’s nice that we both have our projects that we work on individually. So it’s not all work and home and everything at once. We try to keep things separate in that department just to sort of give ourselves a break.

Casey Nicholaw directed you in Book of Mormon, Something Rotten and Aladdin. Broadway has this history of great choreographer-directors: Jerome Robbins, Michael Bennett, Bob Fosse. What is Casey’s directing superpower?
Well, I call him the real Broadway Genie. I think he has magical powers. When Casey’s in the room, he has more energy, all day. He’s always ready and full of ideas and full of fun. Casey’s superpower is the way that he can track a musical number. His eye is so incredible in terms of the big picture, and he’s got a very strong vision. And another of his superpowers is that you feel safe in the room with him, so you’re not afraid to try anything.

How does it feel to be starring on Broadway?
I’ve always been this theater-nerd kid, so my dream has always been to be on Broadway. People around the world hope that they get to see a Broadway show one day in New York City. And Broadway is the Disneyland of musical theater. So it’s almost indescribable, how much it makes my heart full.

What’s the New Amsterdam stage door like?
Oh, they freaking love the show! I get a lot of requests for phone videos, people asking me to say, “You ain’t never had a friend like me!” Or, “Can you send my mom a message,” “Can you send my father a message,” “Can you send my son a message?” And the stage door is all ages, you know. People who saw the film as kids, people who just like Aladdin. You have Broadway fans, or the family that came in for the evening. They’re so excited to meet Aladdin and Jasmine and the Genie. They actually believe I am a real genie. “Can you grant me wishes?” And I always tell them, “I wish I could!” 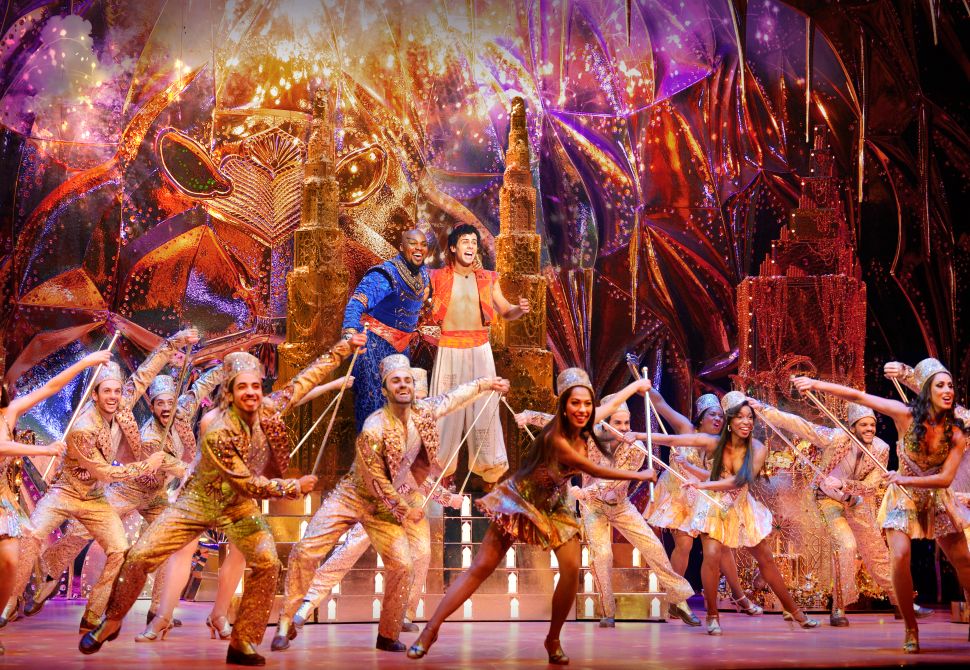