It had to happen. The miserable fools who are hell-bent on changing the theater world by destroying timeless classics in a misguided effort to make them relevant, trendy and politically correct (whatever that means) finally got around to screwing up Oklahoma!.

For reasons that make no sense whatsoever, the landmark 1943 Rodgers and Hammerstein production that marked the beginning of a new era in American musicals has now been cheapened and vulgarized at New York’s Circle in the Square Theatre in a “modernized” version designed to appeal to kids who have never heard of Oklahoma! and ignorant ticket buyers who hate musicals in general and avoid anything categorized as “old-fashioned” in particular.

And so the lights go up on the farm owned by Laurey Williams and her beloved, no-nonsense Aunt Eller (both immortalized by golden-voiced Shirley Jones and legendary Charlotte Greenwood in the magnificent 1955 film directed by Fred Zinnemann) to reveal a set consisting of eight tables replete with Fiestaware you can buy at Bloomingdale’s and 16 crock pots you can order online. For the next 2 hours and 45 minutes, everything that can go wrong in a lunkheaded, misguided musical actually manages to do so.

Laurey is now black, which is perfectly acceptable, if only Rebecca Naomi Jones were a better singer. There can only be one Charlotte Greenwood, but the ubiquitous Mary Testa, who has screamed her way through scores of shows to my astonishment, is the most charmless Aunt Eller it has ever been my displeasure to see (even worse to hear).

I’ve seen dozens of Curlys in my day, including Gordon MacRae, but the greatest was Hugh Jackman. Damon Daunno’s Curly is not for the history books—half rock ‘n’ roll, half hillbilly country-western—but he does grow on you when he’s given half a chance to sing a ballad slowly and melodically without yodeling, which he does on the sweet second chorus of “The Surrey With the Fringe on Top.”

Oversexed audience pleaser Ado Annie (physically handicapped Ali Stroker) now belts out “I’m Jes’ a Girl Who Cain’t Say No” in a wheelchair as a nod to disabled performers everywhere, but the comic relief that made Celeste Holm famous in the original production and provided Gloria Grahame with show-stopping dazzle in the movie is sadly missing.

Will Parker, who returns from Kansas City with enough money from a bull-roping contest to marry Ado Annie, stole the show dancing all over the train depot when Gene Nelson played him to perfection onscreen. The best thing that can be said about Jimmy Davis’ Will is that he’s no Gene Nelson. The scruffy, obnoxious farmhand Jud Fry, who competes for Laurey’s hand to everyone’s horror, is now Patrick Vaill, who looks like a long-haired member of a motorcycle gang. Why is his most dramatic scene, when Curly encounters him in the smokehouse, staged in a complete blackout?

There is evidence that the cast can sing, but everything has been done by director Daniel Fish to disguise the fact. The trend to deprive songs of their deserved appreciation is evident throughout. This is a heinous affectation initiated by the uneven director John Doyle, famous for killing off a performer’s best numbers with a fast, annoying insertion of dialogue at the end of a song before the audience can applaud. His was the only production of Sondheim’s Company I have ever seen where the rousing “Ladies who Lunch” ended with total silence.

Instead of the historic Agnes de Mille dream ballet that distinguished the original 1943 Oklahoma! and remains an integral part of every revival, we now get a half-naked girl with a shaved head prancing from one end of the stage to the other, imitating a horse while cowboy boots drop from the ceiling with noisy, clumsy thuds. Maybe that was really the sound of Oscar Hammerstein and Richard Rodgers thrashing around in shock from their graves.

During intermission, the audience is served chili and corn bread. The Rodgers and Hammerstein Organization should be ashamed for giving permission to produce this gimmicky travesty. Its namesakes were catapulted to eternal prominence by Oklahoma! and they didn’t need corn bread. 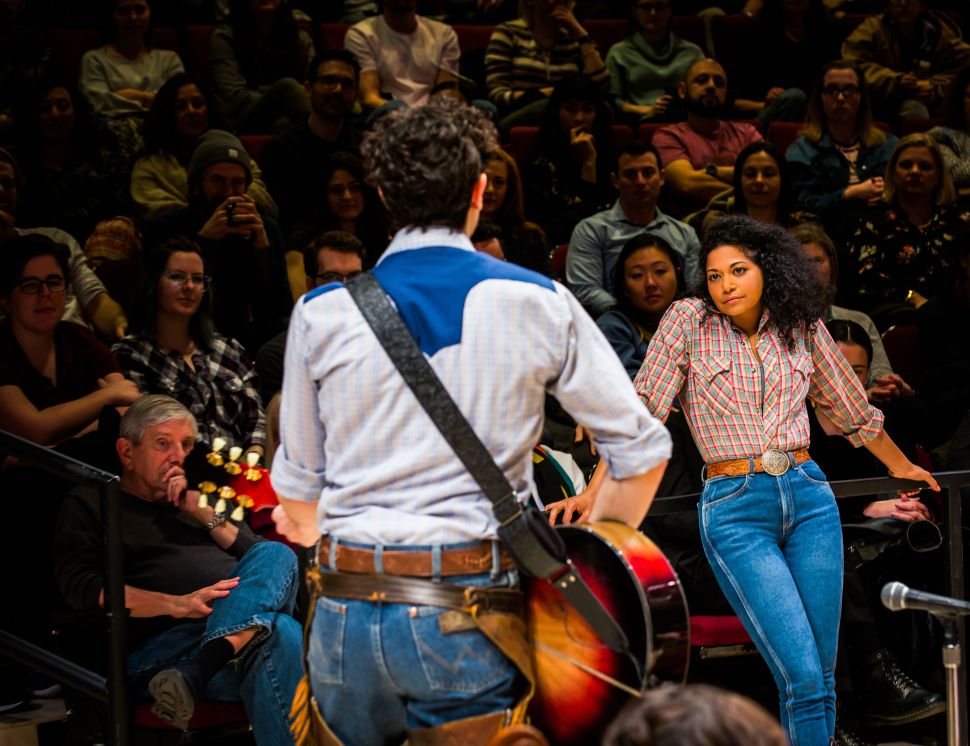