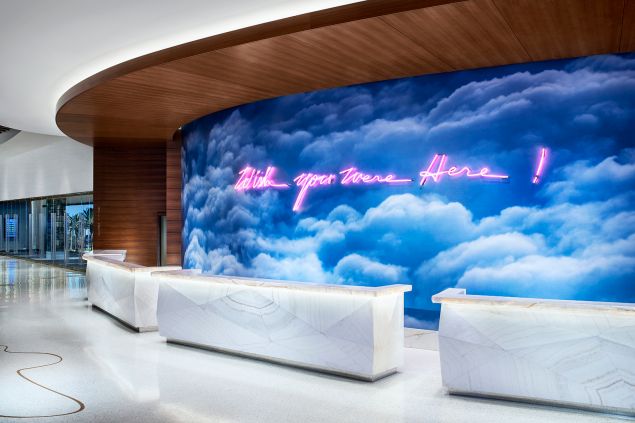 Renovations costing upwards of $600 million have transformed the famed Palms Casino Resort into one of Las Vegas’ best spots for taking in world-class contemporary art.

The revamp began in 2016 when Frank Fertitta III and Lorenzo Fertitta—sibling casino magnates who own Station Casinos—purchased the Palms for $313 million. Shortly thereafter, the Fertittas instituted a campaign called “Palms: From Dust to Gold,” which enacted a total reorientation of the Palms long-struggling brand.

As the resort has reopened in full over the last several months, locals and visitors have flocked to the expanded and redesigned casino as well as the new nightclubs and restaurants by Food Network darlings like Michael Symon and Bobby Flay. It’s impossible, however, to traipse around this rededicated temple of bacchanalia without noticing the surplus of works by famous and upcoming artists.

“The Fertittas put a lot of thought into the pieces that would come to the property and carefully considered what each would bring,” Tal Cooperman, creative director at the Palms told Observer. But it was Cooperman’s expertise that guided the acquisition strategy for the transformation. 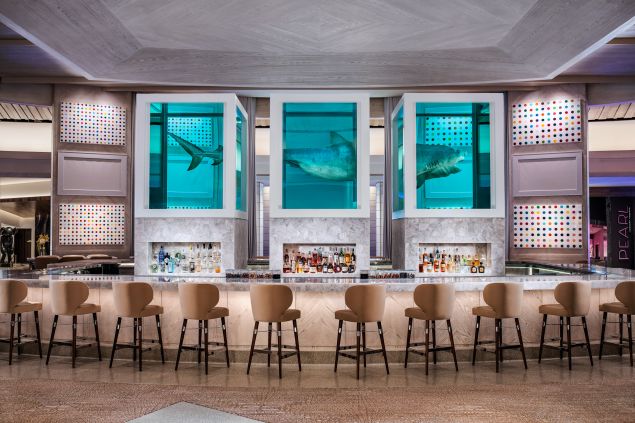 Cooperman was originally invited onboard the Palms team to market the new nightlife offerings. His background in the Los Angeles street art scene led to an expansion in duties that included overseeing the effort to choose museum-quality works for installation all over the resort.

Ultimately his efforts ended up touching every venue. A Banksy hangs behind the DJ booth in one of the swanky restaurants. Warhols and Basquiats are positioned near each other in the steakhouse. A massive, collaborative photography and neon artwork by Olivia Steele and Keegan Gibbs dominates the lobby from behind the front desk. Works by Murakami and KAWS and so many more are found around practically every corner. Everything is insured, just in case an admiring reveler happens to bump into or otherwise desecrate the art. 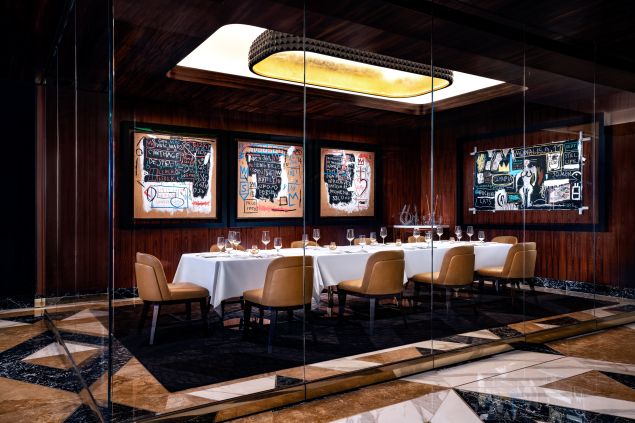 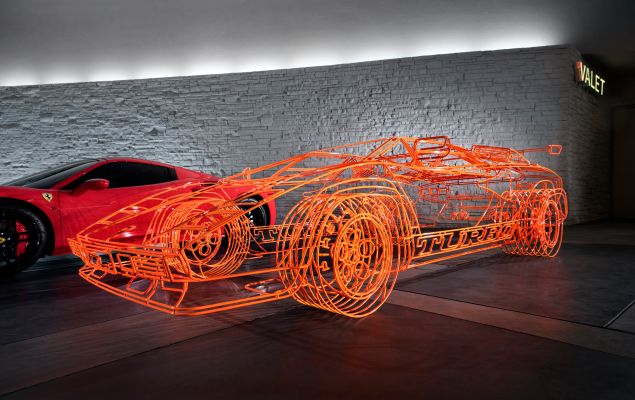 Cooperman tells Observer, “The Fertittas, Palms GM Jon Gray, and I deliberated for months on who was right and who would bring a different aesthetic to the property. We wanted to create a true experience for guests here, and thoughtfully tried to juxtapose the blue chip works with emerging and graffiti artists.”

The major achievement in this program is the intimate collaborations that Cooperman and the Palms had with Damien Hirst. For instance, the artist designed one of the hotel’s bars and crowned it with a formaldehyde shark, segmented into thirds as a triptych, and surrounded by pieces from his “Pharmaceuticals” series. 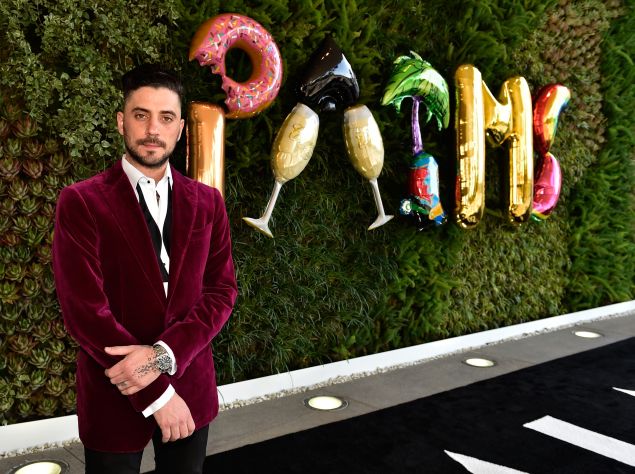 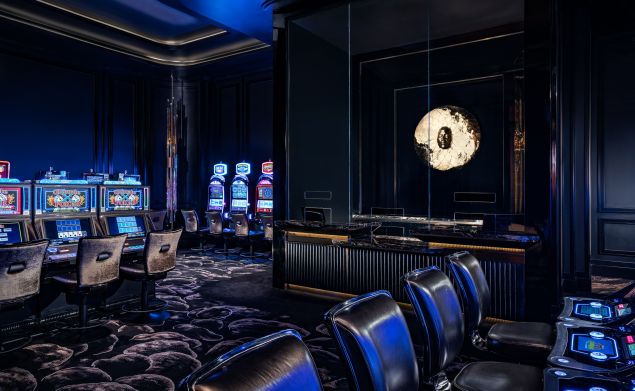 The Fertittas took this collaboration further, however, and unleashed Hirst on the hotel’s penthouse, now called the “Empathy Suite.” Hirst had, according to Cooperman, a “blank check” to decorate the massive room with custom flooring, wallpaper, and furniture that largely plays on his butterfly and pill motifs. At $100,000-per-night with a two-night minimum, the Empathy Suite is cited as the most expensive hotel room in the world. The hefty room rate includes a litany of perks and services, including a private art tour around the resort’s grounds often led by Cooperman himself. 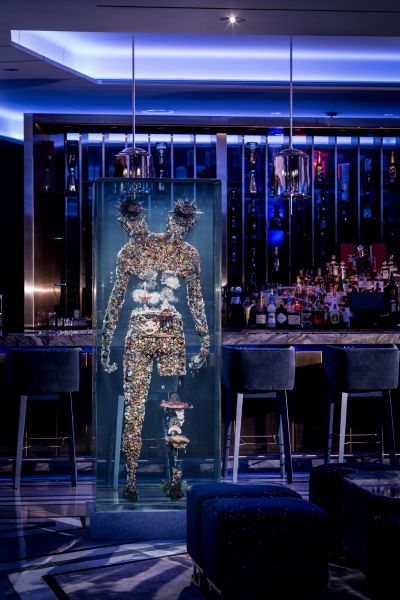 Cooperman says, “When we began this project, we set out to create the next era of Vegas and provide guests the best experience possible in every aspect of the property. Back in the day Palms really reigned as “the place to be” and we feel what we’ve created truly is the new Vegas.”

Moving forward, Cooperman and the Palms will work to find new artworks to rotate into the resort. This will, ideally, ensure that the Palms’ art program never stagnates and that this immersive experiment combining Vegas glitz with high culture will continue to evangelize fine art in Sin City. 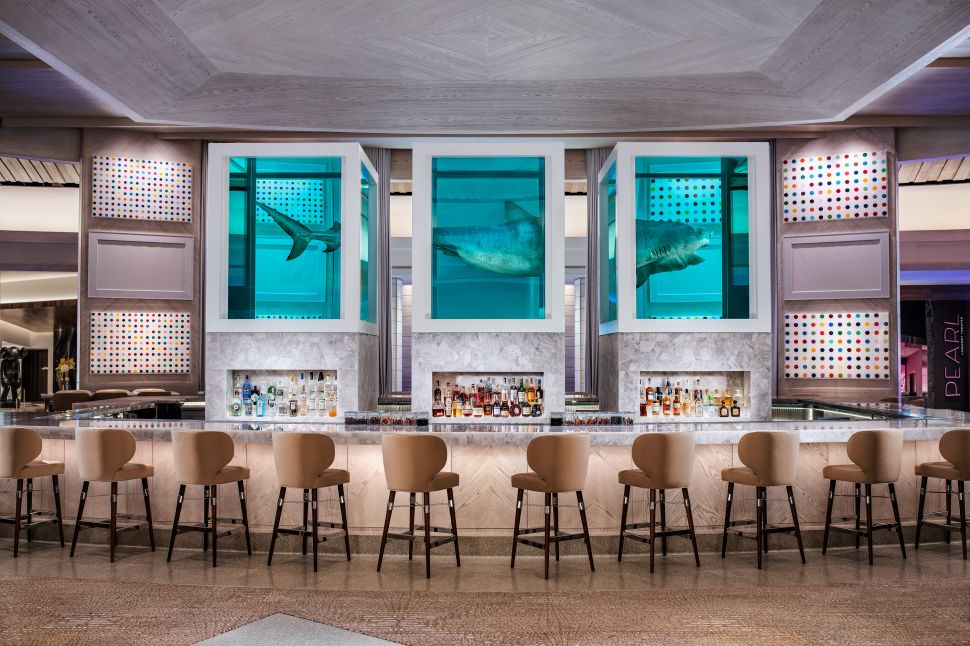