It’s fitting that director Penny Lane’s new movie has a title that ends with a question mark. Lane, a documentarian who previously made Our Nixon and Nuts!, presents Hail Satan? in the same way she herself approached it: with an inquisitive mind. Ostensibly cheeky but actually quite deep, the new documentary asks viewers to not just question the Satanic Temple—its central focus—but to question everything they think they know about religion and politics in America. Today, when so many of us are unwilling to take the time to understand the misunderstood, Lane has done so, and as she debunked the myths about Satanism, she also uncovered the details of a very plausible threat to make our nation a theocracy. Is the title of Hail Satan? also a call for membership? As Lane told Observer, it’s more of an invitation for everyone to open their minds.

Observer: Hail Satan? cuts through a lot of stigmas and misconceptions about the Satanic Temple. When you started this project, what was the most surprising thing for you as you peeled back the layers?
Lane: There were so many surprises. But one that came early on was, I thought I was making a movie that would kind of be making fun of religious people, and then I realized I was making a movie about religious people. I knew that the Satanic Temple said it was really a religion—or really religious—but I didn’t fully believe it initially. I thought some of them were kidding about that, and then I was very surprised when I discovered how sincerely the members hold their satanic identities.

One could argue that the seven tenets of the Satanic Temple, which are listed in the movie, are, in many ways, guidelines to basically being a decent person. Did you find yourself wondering why the members need an idol like Satan in which to ground their beliefs?
Well, I don’t think the seven tenets are a generic endorsement of all virtues. You could say that honesty is a virtue, or loyalty, or obedience or cooperation. But the seven tenets are oddly specific. They’re heavily about autonomy, thinking, open-mindedness and the willingness to change your mind in the face of new evidence.

I think religious ideologies pick various virtues they think are most important. If you look at Satanism in terms of how it constructs the narrative around Satan, what you see is an elevation of knowledge-seeking, independence, rebellion and freedom. That’s pretty specific, and that’s what they identify as the qualities of this literary figure. That’s one way of thinking about it. A lot of people ask, “If they’re just nice, secular humanists, why don’t they call themselves something else?” And they can get very offended by these statements. Satanists aren’t members of The Church of the Flying Spaghetti Monster—they haven’t deliberately chosen an absurd godhead in order to make fun of religion. They really believe in what they’re doing, and Satan is central to that.

Rebellion is obviously very much a part of their belief system, but surely they must know that, by attaching themselves to Satan, and invoking that name, they have their work cut out for them.
Yes, and they would say that’s the whole point. They want to be the outsiders. They want to be misunderstood and disliked. That’s the role they’re choosing. They’re not trying to get just anyone to join. It’s a very anti-evangelical religion.

In the movie, there’s a scene at a school where a mother calls the Satanists evil, and when they’re about to respond, she basically says “fuck you” and storms out. That’s a pretty accurate snapshot of our current, reactionary cancel culture, which doesn’t always leave much room for dialogue.
I agree, and the Satanic Temple embraces the idea that complexity’s okay. Not everything is so simple. It’s unbelievable to me how many people I’ve had conversations with over the last three years, who, when I told them about the movie I was working on, would say, “Oh, yeah, I know a lot about Satanism.” Then you talk to them and realize they know nothing about Satanism, but they’re absolutely convinced that they’re experts, no matter how much you try to gently make them understand that they’re speaking from pure ignorance. They don’t care.

I thought it was very wise for you to include the segment where Jex, a member who starts out as a major figure in the film, is essentially excommunicated when she goes rogue and talks about things like killing the president, which goes against the Temple’s ideologies.
It’s funny because the essence of that conflict—even though it’s not exactly stated this way in the film—is that the Satanic Temple wants to work with the system, because they believe in the system. They think that America is a great idea, and that we should probably obey the constitution, and we’d be better off if we did. I don’t think Jex disagreed with that, but I think her spirit is so much more about embracing chaos, and no institution was ever going to contain that. I also think it’s important to say that the conflict with Jex is really playing out in different ways every day within the movement. A lot of people come to the Satanic Temple expecting something a lot crazier than what they get. It’s no surprise that a group of Satanists would be full of eternal conflict and rebellion against authority every day.

I also appreciated that her excommunication wasn’t a proud moment for the members. They did it reluctantly, but out of necessity.
Yeah. You’ve gotta remember that Lucien Greaves [co-founder and spokesman of the Satanic Temple] is the same person who, in this film, takes his ball sack out and puts it on the gravestone of someone’s mother. It’s not like he’s unsympathetic to people having fun, but by the end of the film, you see that he’s had to embrace his leadership role.

How would you describe Lucien? In the movie he attests that he’s dedicated his life to the Satanic Temple and that he’s determined to make his work his legacy. That’s a strong proclamation to make.
It’s really hard for me to convey just how little Lucien enjoys being a public figure. It seems like, “Well, geez, if you don’t want to be a public figure then don’t go on Fox News.” But what I can say is he feels very strongly that this is a calling. Somehow he’s been given this task, and someone needs to do it, and I think in every way he wishes it wasn’t him, and that he could go back to being a private individual. I don’t wanna go too far—I think he enjoys what he’s doing to an extent—but it’s not about the attention at all. The best thing I ever said to him when trying to get him to agree to this film was, “I’m not that interested in you.” It’s probably the only reason he said yes.

I like that you brought up “the idea of America,” which has become tarnished—or rather, unmasked. A huge arc in your movie involves the infiltration of Christianity into our government, which is not how it was founded. How did this experience affect your own idea of America?
At the beginning of the project, Lucien and other people would say things like, “There is an organized, well-financed, well-connected and remarkably effective coalition of lobbyists who are trying to make this country into a theocracy.” I thought that sounded a little paranoid. But actually they were completely right, and the more attention you pay to the news with that question in mind, the more evidence you get for that point of view.

If you look at our film, someone like Jason Rapert, an Arkansas state senator who wants to put the Ten Commandments on the State Capitol grounds, is just a foot soldier in a much bigger war. And his legislation is literally written by someone else. All of these things individually seem like no big deal, but when you start seeing the patterns, you start understanding that they’re steps in an organized mission. I came to understand that just because we have a secular, liberal democracy now, believing that we’ll have that forever is naive. I remember being on set one day and saying, “It’s fucking insane that our national motto is ‘In God We Trust!’” The Satanic Temple woke me up, and I think this film will wake people up, too.

It certainly seems that the motivation behind these lobbyists and their cohorts is a fear of any otherized group taking their seat at the table. They’re not just thinking, Oh, those crazy Satanists—they actually fear them. Did you get that sense making the film?
Oh, yeah. I would say that everything we see happening around us right now involves people who are very afraid of losing their majority status and becoming the minority. That’s the kind of language that’s very prevalent when you get into the evangelical world—that the real oppressed minority now is Jesus believers. It’s interesting, because if you think about the fear of becoming a minority… the only reason  you know that being a minority is shitty is because you treat minorities really badly. Otherwise, why would you care? I think it’s really annoying that the white evangelical majority of America is so afraid of becoming the minority. It just shows you how shitty it is to be different.

As the director of this film, you present some pretty difficult things to swallow. But what would you say is the most hopeful element of creating the movie and releasing it to the world?
I think it’s incredibly inspiring to see a group of people with no money, no influence, no connections and no particular power at all have such a big impact on the national conversation. And not only do they lack money or influence or power, but like they’re actively hated and reviled. To see them coming into their own power just by being smart, and punch above their weight in terms of numbers and influence, is pretty cool.

It just reminds you that you can have a voice and influence in the world if you’re smart about your tactics. And they have symbolism on their side. Satan has a lot of weight, so it does a lot of work for them in terms of getting attention and getting the word out. That’s exactly why it’s Satan and not The Spaghetti Monster. They want to be part of the cultural world we live in, and they want to be part of the 2,000-year-long conversation that we’re having about our values and the mythologies we organize our lives around. They don’t want to be defined by new ideas—they want to actually engage with people. 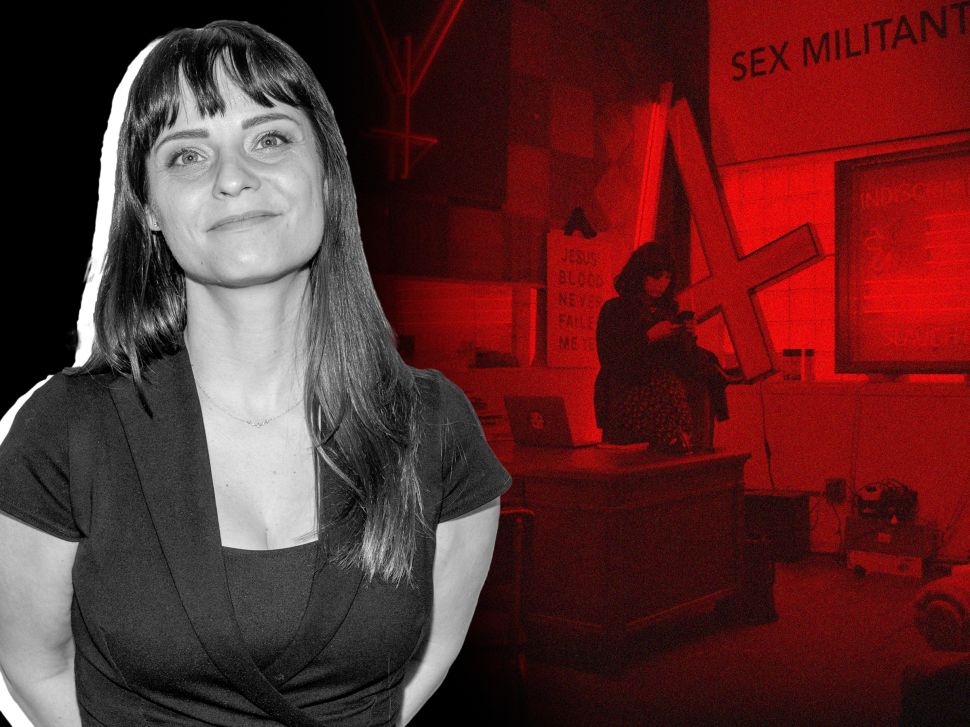