Not many Americans know about the Peterloo Massacre, where—on a lovely afternoon in August 1819 in St. Peter’s Square in Manchester, England—sixty British cavalry attacked an assembly of 80,000 peaceful protesters who were demanding parliamentary representation and a living wage.

For that matter, a lot of Mancunians haven’t heard of it either. After all, the tragic event—which resulted in the murder of 15 people and the injury of at least an additional 400 more—only led to further crackdowns on reformers; universal suffrage wouldn’t come to be for more than another 100 years in England. Peterloo was rolled into the rug of history, taken outside, and beaten with the broomstick of time.

So what to make of it resurfacing 200 hundred years later in select theaters and on Amazon Prime, in the form of a handsome period piece from esteemed humanist director Mike Leigh? His Peterloo certainly arrives with its saddle bags overstuffed with relevancy. The U.K. in the midst of utter chaos as it tries to navigate the fallout of the 2016 passage of the Brexit referendum. Meanwhile, democracy is under attack on all corners of the earth.

Unfortunately, this all too obvious connection to the topsy-turvy world in which we currently find ourselves is one of the few things that gives this verbose history lesson much buoyancy. (As a result of Peterloo, I can now give a lecture on the opposition to England’s Corn Laws.)

This is a movie that’s back-loaded to the extreme: all of its action takes place in the last 20 minutes. Not that Leigh would ever be confused with Tarantino, but it would have been considerably more engaging to have started with the main event and moved backwards to how we got there.

As is, the first two hours are so laden with monologuing that you would think it was a convention of Regency era super villains—or perhaps a debate society made up of well-funded, early modern history reenactors. Either way, the film is so lacking in dynamism that, if our current world weren’t such a bloody mess, there wouldn’t be much incentive to give it the time and attention the film demands.

Instead, like the underpaid workers in the newly mechanized textile mills, we have to grab nourishment when and where we can. Here it comes in the form of Leigh’s longtime cinematographer Dick Pope’s almost mystical summoning of pre-electric light, as well as the meticulous and wonderfully grimy recreation of daily life from that time. Leigh is particularly entranced by the hands and feats of workers: the mother who pounds the dough for pies to sell at market to keep her brood from going hungry; the printer who inks and presses the broadsheet newspapers that capture the agitation emanating from the streets and meeting houses.

Some of the language in Leigh’s script is quite scrumptious; but like a mutton roast, a little of it goes a long way. It becomes achingly clear that in his considerable research (he’s been contemplating making the film since the 1970s), he came across a great number of archived speeches that survived the centuries. What is much less obvious is why he felt compelled to transpose them into his film word-for-word when his is a medium built for dialogue and action.

Still, there are some benefits to this approach. Almost every member of the talented cast gets an opportunity to speechify, and they all make the best of their moment. But with well over 100 speaking parts, it can feel like a big band performance where every last instrument gets an unnecessarily long solo when all you really want them to do is play a song.

But even with its insistence on stiflingly uninterrupted oratory, there is something moving—even vital—about being introduced to this primordial example of militarized response to such basic societal demands as equal representation, a living wage, and a fair justice system.

For all its faults, Peterloo powerfully posits the same question that has been hanging over demonstrations from Tahrir Square to Ferguson, Missouri. In an age of upheaval (the British aristocracy of the time had recently witnessed not one but two revolutions), is it possible for the ruling class to put up with the most fundamental demands of justice from a fed-up populace without completely freaking out? The answer then and now is a bloody and resounding no. 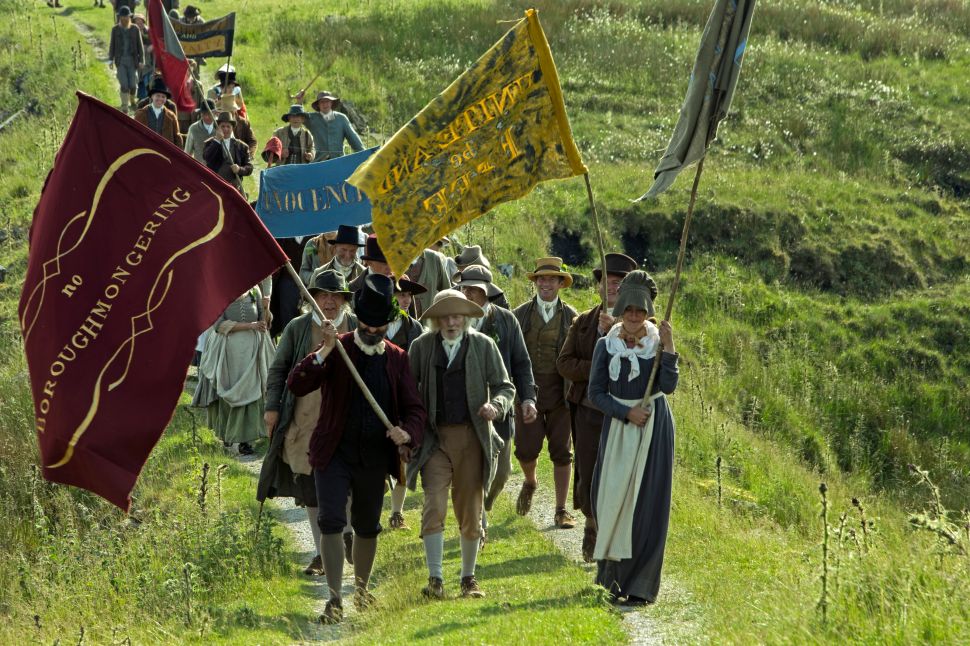