While instruments have long been included in artistic compositions that hang from walls of lauded museums—from portrait and still life paintings created in the Baroque era to Picasso’s ‘Musical Instrument’ series in the early 1900s—the sound-makers themselves are not usually exhibited as objects of art. The Metropolitan Museum of Art is changing that with “Play It Loud: Instruments of Rock and Roll,” showcasing musical machines played by over 80 landmark artists as a means to honor the critical role these objects have played in the advent of the rock genre.

The show puts over 100 instruments on display—including guitars, bass, drum kits, keys and horns—played by the likes of Bob Dylan, Kim Gordon, Jimi Hendrix, Joni Mitchell, Prince, Elvis Presley, Patti Smith, Bruce Springsteen, St. Vincent and many others. And though the exhibition features many different makers of music (both the people and the objects they played), it’s the guitar that’s star of the show. Understandably so; is there anything other sound than that of an electric twang to conjure up images of revolution and joyous riot that iconically define what is perhaps the most influential artistic movement of the 20th century—rock and roll?

Jimi Hendrix’s hand-decorated electric guitar, dubbed “Love Drops,” is on display, which was made in 1967. Though he mostly played Fender Stratocasters (a guitar considered to be one of the faces of the rock and roll genre), Hendrix performed using this Gibson Flying V from 1967 to 1969. According to the museum, the instrument was most likely used during the making of his live album sessions and also may have been what he played on his third and final album, Electric Ladyland from 1968.

While the object was originally decorated by Hendrix himself using nail polish, Mick Cox, a musician in the Irish band Eire Apparent, refinished and returned it to Hendrix in 1969. The guitar eventually fell into the hands of Dave Brewis, a guitar collector, who had it fully restored with its original paintwork. It has since been on display in different guitar shows around the globe and in an exhibition at the Museum of Fine Arts in Boston in 2000.

Other key guitars on display include Joan Jett’s signature black and white Gibson named “Melody Maker” and Eric Clapton’s favorite Fender Stratocaster, “Blackie,” an item that was sold to music retailer Guitar Center for $850,000 through a Christie’s auction in 2004 in support of Crossroads Centre, a drug and alcohol rehabilitation center the artist founded. While some guitars were customized to the musicians’ liking, others were famously destructed during performances—a hallmark of the rock genre.

Going one step further, the show also displays rigs, special equipment or gear used to make music, emphasizing the ways in which different artists have devised their own unique sounds.

Regarding the motive behind the exhibition, Jayson Kerr Dobney, the Met’s curator of musical instruments, commented in the exhibition’s press release: “Instruments are some of the most personal objects connected to musicians, but as audience members we are primarily used to seeing them from far away, up on a stage in performance.” With this, the special showcase will give music fans and art lovers a rare chance to see the guitars and other iconic objects not only close up, and but also all banded together.

According to Max Hollein, the Met’s director, “The exhibition allows us to appreciate the artistry of the instruments as well as their powerful role in the creation and expression of rock’s legendary sound and identity.” As the rock movement was defined by the contagious creative spirit, boundless experimentation, and rebellious energy of the musicians who put their whole hearts and selves stage, its legacy still reverberates today, for the music industry and beyond.

In this way, “Play It Loud” serves to elevate a key chapter in the history of music making as well as the ingenuity of the 20th century. And this is achieved by uplifting the relevance of the electric guitar—an object still used today in ways that are indelibly influenced by the twangs, screeches, strums and ultimately, memorable melodies produced on some of the unassuming instruments on view at the Met. 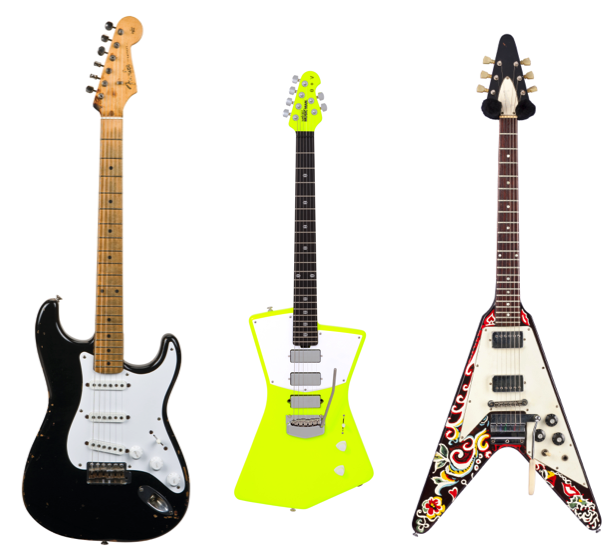