Social media has brought the world untold horrors—mostly duck lips and Olivia Jade—but once in a great while, it can remind us that there’s still beauty out there. Case in point: Richard Haines. His jangly, vibrant fashion illustrations (1960s abstraction reflected in a slightly horny eye) took off on a blog he started from his Bushwick, Brooklyn, apartment, attracting the attention of GQ and The New York Times and racking up 65,000 exceedingly engaged Instagram followers. Today his dashing drawings are blown up in store windows, splashed over Criterion Collection covers, used in collaborations with Dries van Noten and collected in gallery shows like “The History of Beauty,” now running at Daniel Cooney Fine Art in New York’s Chelsea district.

If you don’t know Haines, he might sound like yet another prodigy worthy of your exasperated ire. Not quite: Haines is 67, moved to Manhattan in the ’70s and proceeded to rack up the La Ronde of résumés. He dreamed of becoming a fashion illustrator, but after discovering that was a dead career, he became a successful clothing designer for the likes of J. Crew. In 2008, he lost his job and Fifth Avenue apartment in the financial crash, then reinstalled himself in Brooklyn as a fashion illustrator.

But that’s a bit unfair. Although his work caught the eye of the fashion world first—Miuccia Prada called on him to collaborate in 2012 — Haines is primarily an observer of enviably sexy passers-by. (Witness his 2010 show “The Boys of Bushwick,” for which he frequently gets requests for a sequel.) “The History of Beauty” presents 25 new pieces alongside work from the masters that inspired Haines, including Jean Cocteau and Paul Cadmus, plus collages and an outsize wall hanging that nods to Christian Bérard, the Parisian set designer who influenced (the OG) Dior.

Observer: What exactly is “The History of Beauty”? Why are you including other people’s works in your solo show?
Haines: This is my third show with Daniel Cooney, and I think it’s a progression from the last two and tells more of a complete story. That’s why I go back to the title “The History of Beauty.” There are drawings by Antonio Lopez, who’s incredibly iconic and a huge inspiration for me. It tells a bigger story about how I got to where I am, and how much I want to acknowledge those people.

Do you think Paul Cadmus would’ve been into Instagram?
I know Warhol would have. I mean, he predicted all of this, which is kind of extraordinary, because things were just shifting when he died. It’s interesting: It’s so important for illustrators to be on Instagram. For painters, less so. But yeah, I guess Cadmus probably would. I mean, it’s such a stream of beautiful images, if you want it to be—beautiful paintings; beautiful art; beautiful references; beautiful, beautiful men.

I’m highly conflicted about social media right now, trying to stay out of cesspools. I finally deleted Facebook this year. But I find so much good work on Instagram. Is Instagram more of an inspiration or distraction for you?
I have not been on Facebook since the election, because it’s just too much of a sinkhole for me. But I’m actually afraid to delete it, because I’m afraid I might screw up Instagram. Is it a distraction? It has been for me. I have to really monitor myself. Because it’s a stream of images, it’s really powerful. My first year of Instagram was just, “Why am I the only person not in Capri? Why am I not beautiful, and why don’t I have a beautiful boyfriend?” I didn’t realize that my life was such a train wreck. There was that first reaction, which is kind of like starting at a new high school: Oh, my God, am I ever going to adjust to this? And now, it’s interesting. As I get older, I’m looking more toward interiors and 18th-century painting. That’s just kind of where I am in my life—less, you know, thirst traps. That loses its power.

I’ve Marie Kondo’d. If someone inspires me to feel bad about myself, I unfollow.
My daughter is 21. She has no Insta accounts. Her friends hardly ever post. A few years ago, she really gave me a hard time for hashtagging everything: “Dad, you’re so lame, you’re desperate”—everything a 19-year-old kid would say. But it’s interesting, their take on social media. They’re kind of more distanced from it.

What is “beautiful” to you?
I’ve been thinking about that a lot. I’ve been spending a lot of time in Europe. I was at a residency in Italy for a month in February, and so I really had the opportunity to spend more time just studying classical painting and really looking at ideas of beauty, sexuality and appeal. There’s the beauty of dressing and appealing to others. There’s the opposite sex or same sex. There’s physical beauty. There’s emotional beauty—it’s a big one.

I went to a museum in a small town outside Milan, and the first thing I saw was a fresco, probably 2,000 years old. It was an underwater scene—just a fish and three crawfish swimming. It was so beautiful and fresh and spontaneous, it caught my breath. And I thought, Here’s something someone did 2,000 years ago, and it really feels like that person just now walked away from it. And it was really emotional to just connect to another person’s sharing of a moment. I mean, that to me was a really beautiful thing, and it kind of got me going on the history of beauty.

Part of what I love about your story is that you’re such an example of how New York can let you reinvent yourself, if you need to. Because of today’s gig or freelance economy or whatever you want to call it, so many of us are faced with this, repeatedly. But in 2008, when you had to start over, where did that tenacity come from?
I didn’t even know I had the wherewithal to do it. But when we’re faced with the choice of either sinking or swimming—I had to keep putting one foot in front of the other. I had about a year of just sheer terror. Like, “What… is… happening?” Going from having all this stuff to having nothing. Because I had a young daughter, I was responsible for her. I also felt like I really had something else to say.

People always say, “Oh, it’s so amazing how you walked away from design and made this choice!” I didn’t really walk away. I was basically pushed. There was nothing there; it was a pile of rubble. I didn’t really have a choice. In retrospect, it was a really important physical and emotional Marie Kondo moment: It made me ask, Who am I, what do I really need in my life and who do I want to be? Which is kind of—there’s no resolution, I think, with age. It’s a constant question: Who do we really, really want to be?

Do you draw every day?
I pretty much do. It’s interesting: When I was designing, I was drawing less and less, because the job became more managerial, which I was really, really bad at. There’s a thread: The less I was drawing, the more unhappy I was. So I draw every day. It’s a kind of meditation, a release—it’s therapeutic. It’s something I really want to do. If I don’t for a couple of days, it’s like not going to the gym. I start getting cranky, and muscles start getting weird. Young illustrators always contact me on Instagram and ask, “What should I do?” I say, “Just sit, every day, and draw. Don’t stop, because it’s a process.”

Where’s your favorite place to sit and draw?
I have a desk here in my studio. It’s really small. It’s more about what I see, and then I come back here and draw. I still live in Bushwick. I’ve been here 10 years, which I find kind of wild. I certainly never thought it was going to happen, and I still find it really inspiring. I love going to Europe. I love going to fashion shows. I love walking through a museum. I love walking through the streets of Paris.

I used to sit outside more, although that’s changed. I like the privacy. A lot of it has changed because of the technology of phones. If I see someone on the streets in Bushwick, they’re usually some kid and they’re walking really, really fast, and I don’t want to stop and make the whole conversation. So I’ll just take a couple of shots, come back and draw it. That’s not something I could have done eight years ago. So the technology actually has really helped.

And they say there’s no artistry now. What’s next for you?
I’m working on a book with a friend who’s a writer, putting that together and starting to shop that around. I’ve kind of been at another crossroads. My daughter’s graduating from college in a couple of weeks, which I find completely bizarre. So she’s at another point in her life, which kind of frees me up. So I’m actually not sure. There’s a kind of uncertainty there, which is exciting, but also weird. It’s been such an amazing 10 years, and I’m kind of always gratefully happy and surprised that things continue to unfold and change. I just kind of keep putting one foot in front of the other.

When you first came to the city, did you think this is where you’d be in your career—still doing it? Or did you think you would be on the golf course?
I knew I was not going to be on the golf course. That’s where my parents were when they were my age, and that was great for them. But I guess that’s part of the beauty of New York—unless you opt out, you don’t have to go to pasture. You can just keep going.

“The History of Beauty” runs through June 1 at Daniel Cooney Fine Art in New York. 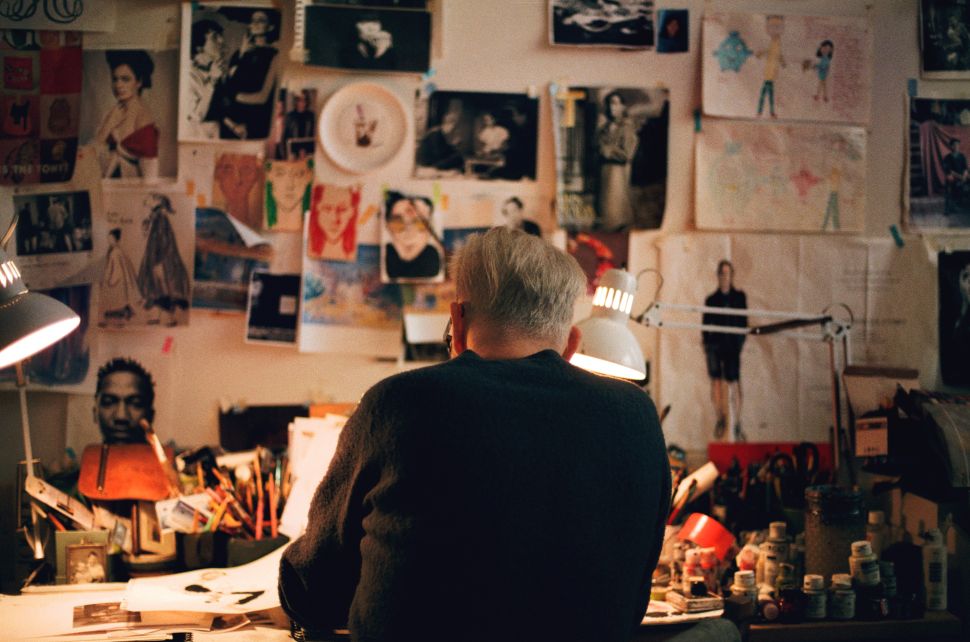