I was excited to travel to Athens, Greece, recently to drive the 2020 Range Rover Evoque, the second generation of the car that helped launch our current plague of luxury compact sports utility vehicles. My excitement, as with a lot of people on the junket, mostly had to do with visiting Greece for the first time. Another short luxury vacation in a glamorous locale: this is why negative reviews of new cars rarely appear.

I’d seen in the press materials that Land Rover was launching this new Evoque with a plug-in hybrid variant. A Range Rover that you can plug into the wall! Now I was actually excited. We’d drawn one step nearer to my dream of a world populated by electric, self-driving cars.

When we got there, Range Rover disappointed me by announcing they’d have no plug-ins on hand for us to test. Those will be sold in the European markets only. Instead, we got to spend our days behind the wheels of what they call a “mild hybrid.”

A mild hybrid is essentially a car with a small electric motor that assists an internal combustion engine, allowing the engine to shut off when a car is braking, coasting or stopped. It saves a tiny bit of gas, but mostly it allows car companies to claim they’re doing something green while not having to incur the full cost or curb weight of installing a full hybrid system. The technology made an unmemorable debut in the 2007 Chevrolet Silverado, popped up in a couple of late-model Saturns, and blessed some unpopular Buick sedans at the bottom of the market in 2012.

More recently, the Ferrari LaFerrari, not known as an environmentally-friendly car, was mildly hybrided. The tech has also been showing up in a variety of new vehicles as the auto companies try to adhere to the Obama-era’s endangered CAFE standards. The new Ram 1500, Jeep Wrangler and a variety of Mercedes variants are among the other lip-service vehicles that have appeared as the industry dips its toes into the dangerous waters of full electrification. The 2020 Evoque marks Range Rover’s first use of the technology.

No one would ever confuse the Evoque with something truly good for the environment. Land Rover hasn’t released the EPA numbers yet, but the old edition got in the mid-20s MPG range. This new edition will come close to that. The 48-volt battery exists mostly as a booster rocket, not to save the planet. Without the battery, the car gets 246 horsepower, and with it, 296.

I look forward to the days when an electric Range Rover actually exists, because they’re really fun to drive, especially when they’re in their element. For two days, I dragged that Evoque up and down the Pelopennese, driving the entire time because they paired me with a New York design editor who really doesn’t like to get behind the wheel. I drove over two mountains, through a river, down many barely-populated highways and obscure farm roads, through a number of narrow village streets, and, in one extremely bizarre scheduled interlude, across an abandoned railway bridge in Corinth. Range Rover had strapping British guys walking across the bridge attached with enormous metal hooks. They looked like MI-6 and assured us we’d be perfectly safe.

While something called an “Evoque” might not be my first choice to rumble up a guard-rail-free Greek mountain road, this is, at its core, a Land Rover. They won’t send a vehicle into action without off-road capability. The Evoque has more than eight inches of ground clearance.  It handled every rut and tight turn and steep incline. Try doing that with one of the Evoque’s competitor vehicles, like the Lexus NX or the BMW X1. You’d have to get air-evaced out of there.

But, I found myself thinking, so what? No one’s ever going to drive this thing across an abandoned Greek railway trestle. This was the usual high-end Malibu mall machine. In a defensive presentation on our second night of the trip, Gerry McGovern, Land Rover’s head of design, made a weird joke about how “you know you’re getting older when the police look young to you.” Then he proceeded to passive-aggressively berate journalists for saying the new Evoque looks a lot like the old one.

Well, it does, with some modest changes. It’s been ten years, so this new car has smoother lines, inset door handles, more modern light fixtures, and an even smaller rear window than the original. In the ultimate environmental lip service, they no longer offer leather seats, offering one wool variant and a synthetic covering fabricated out of eucalyptus.

The original Evoque got a lot of criticism for its narrow rear sightlines, but Range Rover has compensated for that with the car’s coolest new feature: a camera that takes the place of a rear-view mirror display. So instead of your face and a half-view of the road behind you, you can see an HD-quality display of the traffic no matter how many Christmas gifts you’ve got piled in the back. Apparently, this tech is also available on some Nissan or GM models, but it was the first time I’d seen it in the wild. I thought it was amazing. It should come standard on all human-driven vehicles.

But that was the only true innovation I saw in the Evoque. They deliberately didn’t play up the “mild hybrid” drivetrain for a reason. This car is not a hybrid in any real way. Despite all the industry talk about electrification and self-driving, the vast majority of cars still pretty much do things the old way. The Evoque will sell in large numbers–for a luxury CUV–because it’s what the consumers want and it’s what the manufacturers tell them that they want. Europe’s plug-in electric variant also has a chance at success, but that’s because Europe is forcing the issue a lot faster than the United States. Though signs continue to point toward Future Car Shock, the industry on the ground remains pretty much business as usual. And a decent, capable car like the Evoque, trapped in a 2010 mentality, is example A. 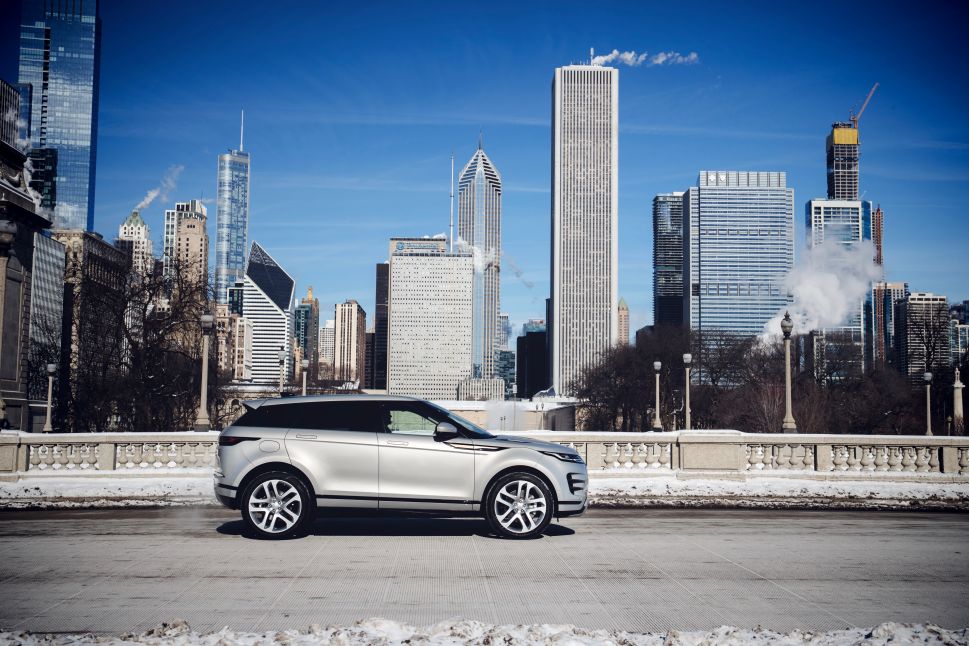