The last years of Amy Pascal’s reign atop Sony Pictures were tumultuous to say the least. From 2010 to 2015, the company finished among the bottom half of Hollywood’s six major studios in domestic box office four times. Pascal, a great producer in her own right, remained admirably committed to mid-budget dramas and star-driven vehicles even as they fell out of favor with general audiences and became financial liabilities. By the time the Sony hack sent the studio into a tailspin of public embarrassment in 2015, the writing was on the wall. In the years since, and under new leadership, Sony has continued to struggle to adapt to the modern Hollywood ecosystem—so much so that folks began to speculate that it might get acquired.

However, the company might just be turning it around. Spider-Man: Homecoming and Dwayne Johnson’s Jumanji: Welcome to the Jungle were massive 2017 hits that resparked valuable IP-driven franchises. Sony Corp then reported a 30 percent rise in 2018 profits in the motion pictures division for a robust total earnings of $489 million, Deadline reports.

Tom Hardy’s Venom shattered expectations, grossing $855 million worldwide to become the year’s sixth most profitable film. More important, it provided the studio a foothold for its long sought-after shared cinematic universe populated by Marvel characters (branded SUMC). July’s Spider-Man: Far From Home will fulfill Sony’s six-picture deal with Marvel Studios, meaning it could reclaim Tom Holland’s Peter Parker for the SUMC if it wants it. Jared Leto’s 2020 feature Morbius will be the next stepping stone in this grand design. Elsewhere, the Oscar-winning Spider-Man: Into the Spider-Verse (which earned $375 million worldwide) set up a new franchise, while Hotel Transylvania 3: Summer Vacation took in a robust $528 million globally.

Though Sony Pictures Entertainment did see a 3 percent dip in year-over-year sales ($8.8 billion) from 2017, its future still looks bright. Sony’s projections are up across the board, with $9.7 billion in sales and $582 million in profits. Far From Home is expected to be a major worldwide hit and could ride a post-Avengers: Endgame wave. Social media reactions to Men In Black: International‘s promotional campaign have been so-so, but overseas interest swelled for 2012’s MiB 3 (which pulled in $445 million internationally), so you never know. Quentin Tarantino’s Once Upon a Time in Hollywood looks to be a buzzy Oscars contender. The Angry Birds Movie 2 and a December Jumanji sequel, also starring Johnson, will continue existing franchises, while November’s Charlie’s Angels could revive another.

Ultimately, it looks like Sony is on the mend. 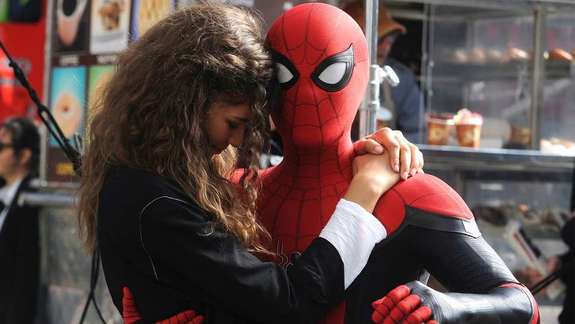