As the Confederate Battle Flag continues to reemerge as a potent symbol of racism taken up by America’s far-right, American artist Sonya Clark thinks it’s time for the other confederate flag to take center-stage. And by that, she means an unassuming piece of white cloth.

“The Confederate Flag of Truce” is a largely unknown dishrag that had a critical role in American history. It was used in 1865 to signal the surrender of the South at Appomattox Court House.

Clark first discovered the Truce Flag at the Smithsonian’s National Museum of American History several years ago, sparking a fascination that led to her latest exhibition “Monumental Cloth: The Flag We Should Know,” on view at the Fabric Workshop and Museum in Philadelphia.

The renowned fiber artist of Afro-Caribbean heritage is known for her exploration of race and class through materials such as historic artifacts and human hair. A professor of art and art history at Amherst College, she unraveled a Confederate Flag in 2017 in a performance piece for the Pennsylvania Academy of the Fine Arts. On May 18, she will also open an exhibition at the African American Museum of Philadelphia, using human hair to represent African diaspora, the African American presence and also ancestry.

Clark was drawn to fiber and mixed-media art from a young age, remembering “wanting to see how the whole wall would feel” as a small child. “I took a pencil and bolted it across the freshly painted wall in my family home,” she recalled to Observer. “Then I explained to my Jamaican mother that I wasn’t drawing on the wall, I was feeling the wall with a pencil. She understood.”

It was in that moment, Clark explained, that she knew she wanted to become an artist. It was her grandmother telling her stories while at the sewing machine that  “embedded” a love of textiles and storytelling in her from a young age.

While her work clearly explores politics and cultural history, Clark argues that all artists in America are, in her mind, political. “I actually think it’s a political move to be an artist in the United States, regardless of what works,” she said. “As soon as you say that you’re an artist, people want to know if you have value in the context of our capitalist society.”

She believes the current political climate makes it an important time for this particular exhibition, aiming to correct a historical imbalance.

“Everyone knows the Confederate Battle Flag but, after seeing the Truce Flag in the Smithsonian, I realized this one wasn’t hidden but also wasn’t elevated,” she said. “Knowing that there’s a power of textiles, it was time to do something.”

In “Monumental Cloth: The Flag We Should Know,” people will encounter the Confederate Flag of Truce, larger than life. The original, a regular dishrag size, was divided in half and then one half was split again, so what remains are only small fragments. Clark worked to make one 15 by 30 feet. Its weave pattern, she explained, is similar to many dishcloths that “people may have in their house right now.” Visitors to the exhibition will have an opportunity to make rubbings to take away with them.

“I know that in many places when things get tough politically, they often come after the artists, right? The reason for that is exactly the reason that I’m having this show,” she explains. “There’s power in making an image, because once someone has seen an image, they can’t un-see it. Once someone has embodied a song, you can’t take it out of their heads and their hearts. And once someone has memorized the poem that gives them the strength to persevere, you can’t undo it.” 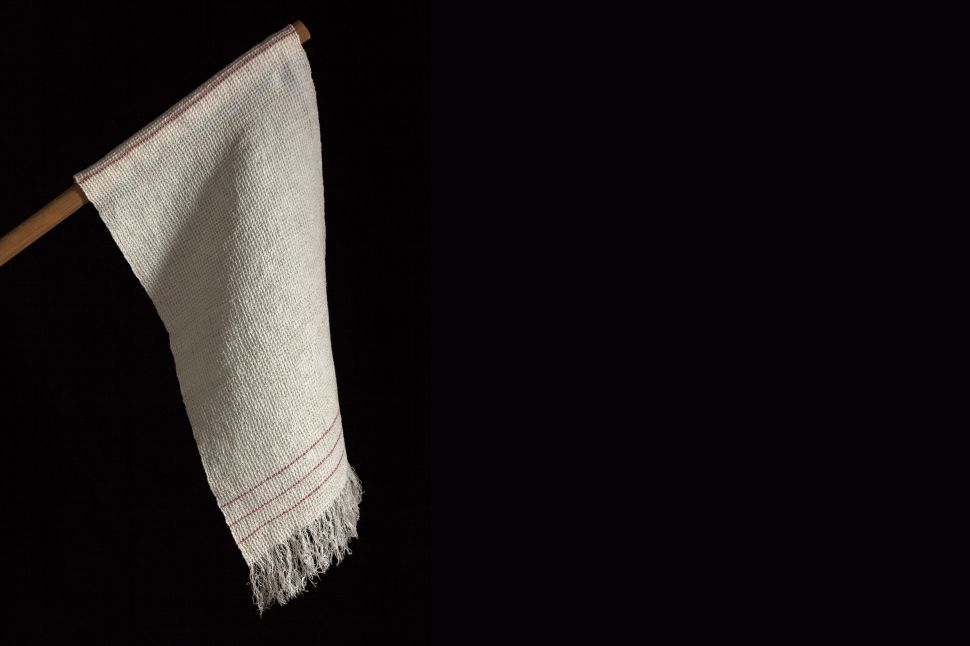