Bonnie Tyler’s soulful 1984 plaint “Holding Out for a Hero,” was finally answered Saturday afternoon when tenor Stefan Vinke made his Metropolitan Opera debut in the title role of Wagner’s Siegfried. Not only was Vinke strong, he was also fast and fresh from the fight.

And when I say “fresh from the fight,” that’s no exaggeration. At the end of just over five hours of opera—most of which time he’s onstage and singing —the hero Siegfried joins in a long, exuberant love duet with the demigoddess Brünnhilde. Most tenors by that point have sputtered, faking the music or just plain dropping out.

But Vinke proved himself eminently worth holding out for: in that last scene he sang even more boldly and even carelessly than he had in the long hours before. By the time the curtain fell my eyes were wet with tears.

That’s despite the fact that Siegfried is, by Wagnerian standards, quite a jolly opera: the hero forges a magic sword, slays a dragon, wins that pesky cursed golden Ring (though he has no clue what it’s for) and then overpowers Wotan, the king of the gods, on his way to waken the sleeping Brunnhilde.

So what I found unbearably moving about Vinke’s final scene (and all that led up to it) is that he sang so openly and frankly—even, just for the hell of it, tossing in a brilliant high C at the very end of the opera. In other words, he performed not like an experienced, thoughtful man, but rather like the innocent and heedless boy Wagner intended Siegfried to be. Vinke not only accomplished the daunting task of singing every note; he realized the impossible dream of making Siegfried lovable.

But there was so much to love throughout this performance. Michael Volle lavished a buttery bass-baritone on the role of the Wanderer, the protean god that Wotan transformed into a Gandalf-like observer of human (and divine) follies. His voice particularly bloomed in the long, wide-ranging phrases of the third act as the Wanderer gradually makes the painful decision to withdraw from the world completely.

Opposing him was the spectacular Tomasz Konieczny as Alberich, the original thief of the Ring. His bass-baritone encompassed infinite variations of scorn, from a bitter whispers to screams of rage. But, as in Das Rheingold, Konieczny also communicated the villain’s frustration and crushed hopes, tempting us to find empathy even with his mad dreams of conquering the world.

In less exalted company tenor Gerhard Siegel could easily have stolen the show as the scheming dwarf Mime; as it was he kept the three other leading men on their toes nonstop during their scenes with him. The trumpeting brilliance of his voice and electric stage energy leveled the playing field between him and Vinke, so Mime seemed both a worthy and a dangerous antagonist for the young hero.

Electronic amplification for the voices of Fafner, the dragon, and the Forest Bird made the quality and amplitude of the voice difficult to judge, though I was impressed at the intensity of Erin Morley’s phrasing as her Bird enlightened Siegfried. As the earth goddess Erda, Karen Cargill was for some reason made up like Mae West in Myra Breckenridge, but her stiff contralto sounded all too mortal.

Which brings us to Christine Goerke’s labored performance as the awakened Brünnhilde, her singing all juddering vibrato and sagging pitch. She apparently has some attractive ideas of how the music might be interpreted, but her unwieldy hulk of a dramatic soprano kept her busy just pumping out the notes.

I’m not sure what happened to conductor Philippe Jordan since Die Walküre, but suddenly, in this difficult and uneven score, he sprang to life, establishing a brilliant and personal rapport with the Met Orchestra. The lively rhythms danced and even in the tormented, bombastic prelude to the final act, the complex orchestral texture remained transparent and gleaming.

The vivid individual performances in this revival masked, for a while anyway, the sad fact that by this segment of the Ring director Robert Lepage was utterly bereft of ideas, using the gazillion-dollar “Machine” as little more than a screen for projections of low-def video game backgrounds. Most egregious of all perhaps was his staging of the romantic tableau of the dormant Brünnhilde, in which the statuesque Ms. Goerke looked like nothing so much as a heap of dirty laundry. 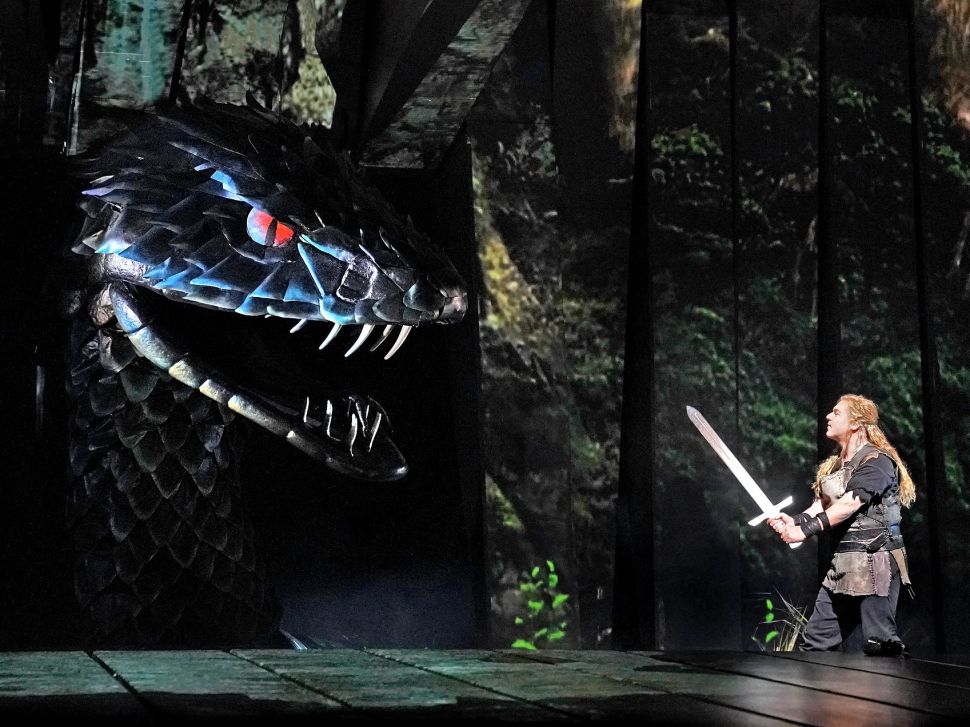