At the St. Regis Hotel in New York City, conservative billionaires, financiers and military strategists gathered on Thursday to discuss the economic and geopolitical challenges presented by China. While the inevitable topics of intellectual property theft, disputes in the South China Sea and the ongoing trade war were discussed at length, one threat loomed as large as the Middle Kingdom itself: The relationship U.S. retirement, pension and index funds have with Chinese state-controlled companies.

“If you finance a gulag, you’re going to get a gulag on a global scale,” President Donald Trump’s former strategist Steve Bannon told the room. “As you peel it back, the deplorable’s pension funds financed it. This is a great tragedy.”

“If the California teachers pension system knew they were holding Hikvision, which builds the security systems that are incarcerating the Uighurs in Xinjiang behind barbed wire and walls, I don’t think they’d be amused,” said Robinson. “These index funds are the greatest discovery Beijing could have ever made because they send companies viral instantly into every cell of the American body politic, and if you have this pace continuing of trillions of dollars of funds moving into American investment portfolios, you could wake up and realize that 22 percent of your retirement is in Chinese security.”

Efforts to expel Chinese companies from portfolios could devalue investment funds, several speakers noted, while prompting a powerful lobbying movement here at home. Placing blame on Wall Street (despite being an alumnus of Goldman Sachs himself), Bannon called for a nonstructural deal with China. Robinson recommended enforcing U.S. Securities and Exchange Commission (SEC) laws regarding transparency for investors.

“Disclosure is a market principle,” Robinson told Observer. “I’m not suggesting market closures or anything draconian, sanctions, etc. But right now, we’re not even imposing market discipline, and therefore there should not be a disruptive impact. We need to do our job. Our job, as laid out by the SEC in 1933, is to make sure that investors are properly informed prior to making a purchase of a stock or bond… Fundamentally, we’re not actually fulfilling the market mandate here. The solution set can be quite modest and non-disruptive and effective.”

The Committee on the Present Danger is a Cold War era group revived by Bannon and the Center for Security’s Frank Gaffney to recommend policy proposals aimed at curbing China’s influence. Both men are controversial figures: Gaffney has earned a reputation for his anti-Islam writings, while Bannon’s name has become synonymous with far-right movements. Thursday’s conference featured additional remarks from Hedge Fund manager Kyle Bass, while an event earlier this month hosted Texas Senator Ted Cruz and former House Speaker Newt Gingrich. 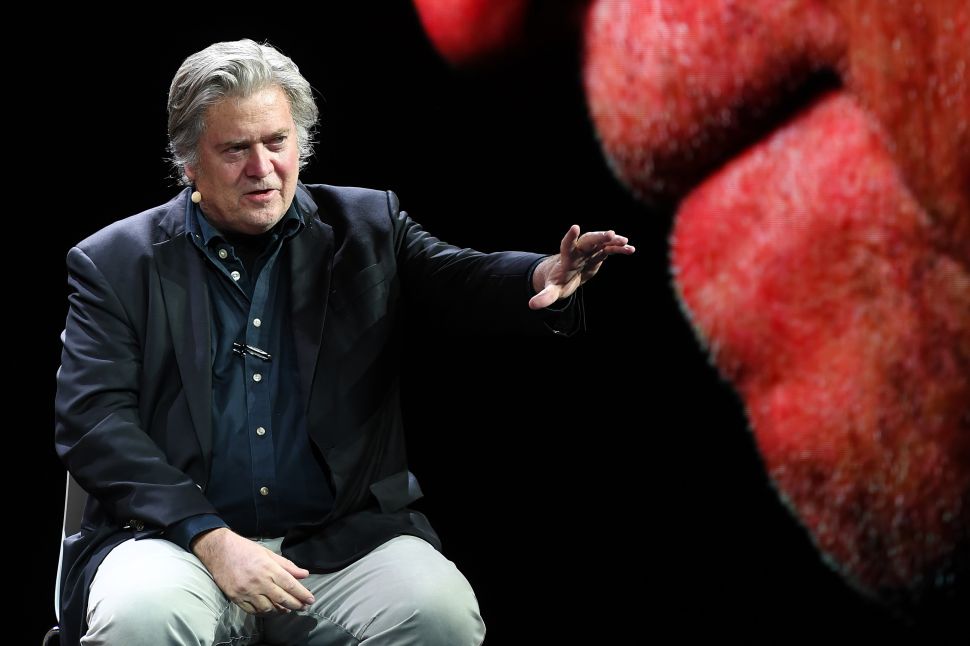