Beware of any film that begins with the words “based on an absurd but true story.” Stockholm, a comic take on a 1973 bank robbery in Sweden involving two idiot crooks who held two female bank employees hostage for six days, is not very funny, and it takes so many liberties with the actual facts of the case that it doesn’t ring true, either.

Overrated, overexposed Ethan Hawke, who seems to appear in a new movie every month, plays Lars Nystrom, a lunatic in a cowboy hat, long wig and leather biker jacket like the one Peter Fonda wore in Easy Rider who references everything he knows according to the movies he’s seen. Calling himself “the Outlaw,” he demands that a million U.S. dollars be delivered by 3 p.m. the day of the heist, or he’ll blow his hostages’ heads off. Calling both the mayor of Stockholm and the prime minister of Sweden, he yells into the phone, “The next time I see you, I want the keys to a Mustang 302 like Steve McQueen in Bullitt!”

The hostage negotiator hauled in by the police turns out to be his best friend Gunnar Sorenson (Mark Strong), who is sprung from jail for the job. They’re both morons, but apparently appealing enough for both lady hostages to fall for them. The actual bank robbery inspired the term “Stockholm syndrome,” which describes kidnap victims who, either romantically or ideologically, develop physical or psychological relationships and bond with their captors as survival strategies. (Think Patty Hearst, whose story was far more fascinating than this one.)

After Klara (Bea Santos) inconveniently gets her period, negotiations are postponed while the cops search for tampons. Then in the middle of the chaos, with the bank surrounded by the entire Swedish police force and an automatic weapon pointed at her head, Bianca, a wife and mother played by Noomi Rapace (the Swedish star of The Girl With the Dragon Tattoo) takes the time to repeat a fish recipe on the phone for her husband’s dinner.

During the six-day heist, a man in Hawaii comes forth claiming to be the real “Outlaw” and threatens to sue them all for spreading libelous rumors. Sometimes the two crooks pause to sing duets of old Bob Dylan tunes. At one point, Hawke, who is no good at comedy, stamps his feet at the police officer who keeps outsmarting him and screams, “I hate you!” That’s pretty funny, but nothing outstandingly hilarious. The rest of the movie fritters away the time indifferently, making 92 minutes seem like 92 days.

Based on a piece in The New Yorker called “The Bank Drama,” Stockholm was written and directed by Robert Budreau, who previously collaborated with Hawke on Born to Be Blue, the dreary biopic about the heroin-addicted jazz singer-trumpeter Chet Baker. It was a disaster in more ways than one, and so, I’m afraid, is Stockholm. 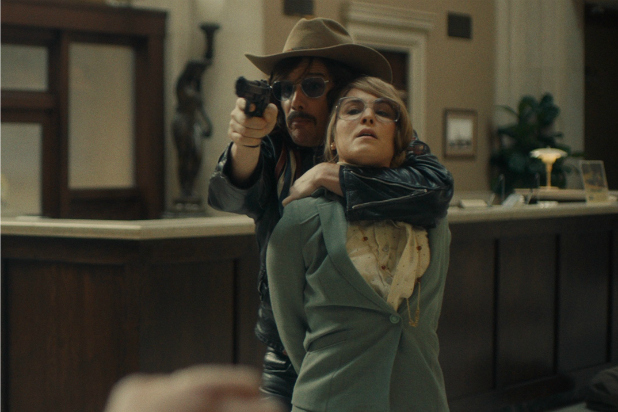