Taha Heydari is having a moment in a big way. With one solo show having opened this week in his hometown of Tehran, another coming up at San Francisco’s Haines Gallery and growing interest from collectors in his adopted East Coast home, the 33-year-old painter is a busy man.

Observer visited Heydari’s studio last month at the School 33 Art Center in Baltimore, where he has been an artist-in-residence since graduating with an M.F.A. from the Maryland Institute College of Art’s (M.I.C.A.) three years ago. A converted 19th century schoolhouse with soaring windows, the bright, cheery setting feels oddly incongruous to Heydari’s often-dark, hyper-contemporary paintings.

One of the smaller, more intimate works bound for “Impact Crater,” Heydari’s solo show at Tehran’s Ab-Anbar gallery, depicts the mummified corpse of Lenin as if viewed through a grainy night-vision camera. It’s an image that manages to be somehow even creepier than its morbid subject matter. Another renders a pixelated explosion from the point-of-view of a first-person-shooter video game. The hand pulling the trigger blurs into the foreground the way a buffering Skype call might, complicating the viewer’s implied relationship to the violence. It recalls the live-streaming footage of conflicts cable news bombarded us with in the days of “Shock-and-Awe” foreign policy. In nearly all of Heydari’s work, references (both subtle and overt) to state control, consumer culture, surveillance and censorship are ambiguously combined and abstracted.

Does Heydari find it weird to have a life and career that straddle two countries with extreme, arguably insane, right-wing governments—governments that have made fear-mongering and hatred of each other an intrinsic part of their respective identities? “Of course!” he laughs. “Growing up in Iran we were surrounded by propaganda about the ‘The Great Satan.’ So I always thought, ‘hmmm…maybe I want to meet this Satan! What’s the devil like?’”

The America of today, though, is starkly different from the one the artist optimistically arrived in. A few months after graduating from art school, Heydari watched the surprise election of Donald Trump unfold. And although he now holds an O1 artist visa, he hasn’t risked leaving the country for fear of being denied re-entry. Discussing this predicament is one of the few times the painter’s mischievous grin disappears, “I haven’t seen my family in four years…it’s awful. Since Trump’s Muslim ban went in to effect, I can’t risk it. Even though I’m here legally, I know other artists who have had problems…so, no. I’m not able to go to the opening. I’m really trying to put as much of myself into these paintings as possible, because it’s the first time my family will be seeing my work in years. We Skype, but obviously it’s not the same.”

And truly, the irony of Heydari’s paintings—for all their Skype-esque aesthetic—is that they must be experienced in the flesh to be fully appreciated. Each canvas is a surprisingly rich tapestry of textures. Finding painterly traces of the artist’s hand amidst the marks made by airbrush or foam rollers is a visceral delight. “I hardly ever use a brush, even though I’m so seduced by paint,” he explains, holding up his iPhone, “That’s why I’m always using this…I am always trying to think of the experience of a screen…it’s like my sketchbook. I need the screen to get away from the seduction of paint.”

Painters have long struggled to capture the moving image, from the fictional artists in Balzac’s Le Chef-d’œuvre inconnu to the real-life art historical movements they foreshadowed—Cubism, Italian Futurism, etc. But arguably, it took the advent of digital video (and all its failures) to establish a vocabulary for painting to appropriate. The buffering livestream, artifacts from sloppy compression algorithms, and scrambled porn accidentally achieved what Picasso could not. For his part, Heydari was first inspired by the Iranian government’s attempts to censor satellite news coverage of the Green Movement protests in 2009, when interference was beamed into international transmissions to garble documentation of peaceful demonstrations and police brutality.

Today, the “objectivity” of photography has never been less trusted. Heydari’s paintings seem to autopsy the cadaver of images’ veracity—examining how those images are constructed, corrupted, and disseminated. Arguably one of his most disturbing works, Inside the Van, was a recent commission from a local collector he was almost hesitant to accept. The painting was inspired by the cellphone video of Freddie Gray’s fateful arrest. In 2015, Gray was apprehended in West Baltimore (not far from M.I.C.A., where Heydari was a student at the time) and died in police custody from injuries sustained while being driven to central booking. His death set off weeks of protests that plunged the city into chaos and eventual occupation by the National Guard. The ambiguous video became a talking point for both the Black Lives Matter movement and reactionary racists.

I ask Heydari if he had feared a backlash for painting such charged subject matter, similar to that which met Dana Shutz after her painting Open Casket (a now-infamous portrait of Emmett Till, a young African-American man lynched in 1955) was denounced as insensitive and exploitative. “Oh yes,” Heydari replies contemplatively, “I don’t think—coming from Iran, where people are just ‘Iranian’—I was prepared for this. I had to think, is it OK for me to paint this color of skin?”

The result is a painting that skirts direct representation. The silhouettes of the two police officers are more or less legible, but the space where Gray would be is a jumble of forms that reference compression artifacts, like a video that has been downsized and enlarged or translated to a different format too many times until the protagonist is rendered a trail of pixels in a blown-up thumbnail. There’s a palpable sense of violence to the painting, but one that speaks of absence—and the visceral effects of that absence. It is not a painting about Freddie Gray, but perhaps a painting about the fact that Gray could not be there to give context or consent to his own representation.

The culture wars have become so bitter—and images so weaponized—it’s impossible to avoid friendly fire. If Guernica was painted in a time where moral certitude was the norm, Heydari’s self-censoring work might stand as a monument to our era’s terrifying uncertainty. 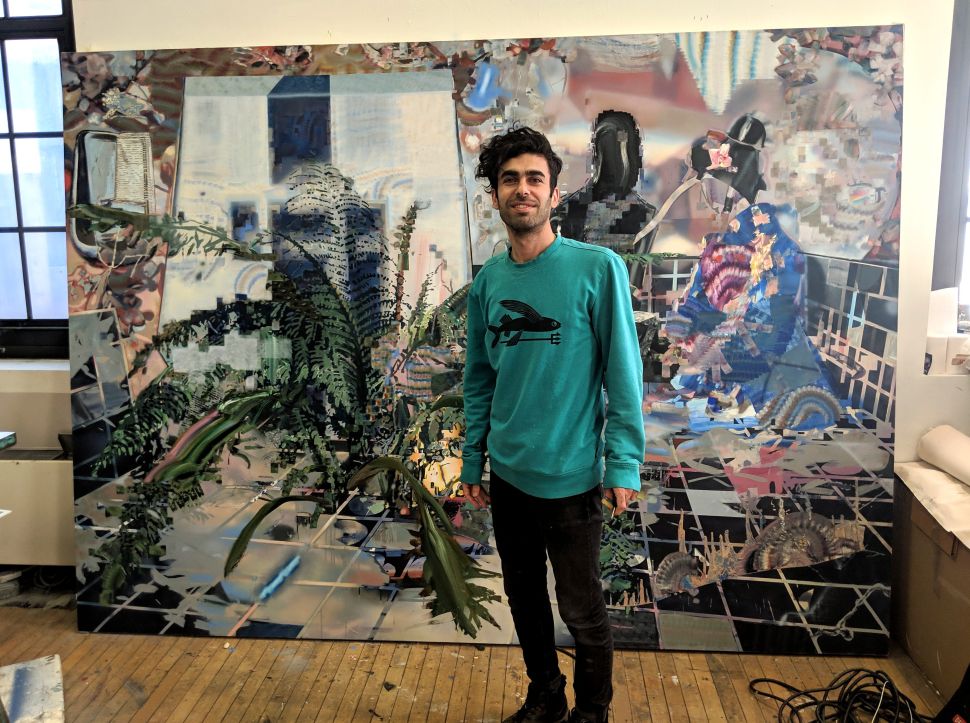