Taylor Swift‘s superfans waited until the clock struck midnight to hear new music from her. Aptly, the content they were rewarded with was distinctly fairy tale-adjacent, and not necessarily in a good way. Taylor Swift’s “ME!,” featuring Brendon Urie of Panic! At The Disco, is our first insight into what’s sure to be an entirely new era for the singer. We can also assume this is the first single off her next album, whatever that ends up being called. Maybe it’s a save-the-world record called Us, but that’s doubtful. Besides, Jordan Peele got there first.

“ME!” absolutely reeks of first-single energy. In subject matter and in musicality, it’s incredibly broad, inoffensive and ultimately built to appeal to the legions of Swifties who’ll lap this stuff up sight unseen. “Cause one of these things is not like the others / Living in winter, I am your summer,” Swift coos. The video looks like a mashup of Mary Poppins Returns and a femme Tim Burton creation. It echoes the everything-and-nothing CGI-constructed parallel universe that characterizes so many blockbusters these days. The 2018 adaptation of A Wrinkle in Time comes to mind. Some ardent conspiracy theorists even thought that Swift’s rainbow aesthetic indicated she was going to come out as gay this week, but that doesn’t seem to be the case (at least not yet).

Watch the video if you want, but don’t expect a radical departure. Swift and Urie play a squabbling couple who argue—in French, no less—in a lavish apartment that morphs into an even more lavish fantasy castle, from which Swift emerges into a candy-colored city street that looks like a block in London none of the rest of us could afford to live on.

Swift once told Vogue that when she was a child, she said she wanted to be a stock broker when she grew up because that’s what her father did. Let’s just say that that neat, Hamptons-aspiring aesthetic comes through loud and clear as she dances in Easter-hued suits with a horde of other women clad just like her. Her vision is imaginative, yes, but it’s the sort of imagination that comes with being born into unlimited possibilities.

In the midst of these festive colors, the artist’s performance is cheerfully vaudevillian and pretty charming. In many ways, “ME!” also evokes “Shake It Off,” the first single from her 2014 album, 1989. Like “ME!,” that song rested on crowd-pleasing, stomping beats and trumpeted its “haters can’t bring you down because you’re special” energy amid a semi-pleasant bath of actual trumpets and serviceable bass notes. But even if the video is supposed to appeal to the tweens and young adults who still gobble up her music, that doesn’t give it an excuse for looking borderline nauseating. All the pastels look spoiled here, as though they’ve been left unrefrigerated and have gone slightly rotten. Plus, Swift’s cat obsession is only getting more grating and eye-roll-inducing. You can only listen to any adult person crow about their cats so many times, especially while the oceans boil around us.

Ultimately, it’s a stilted return to sugarcoated form for Swift, who spent her last album cycle gleefully embracing her spiteful side (“You should take it as a compliment / That I got drunk and made fun of the way you talk“). If you’ll forgive the Harry Potter reference, Swift’s kitten-centric, baby-pink-heavy “ME!” video reminds me of Dolores Umbridge: vindictive fury concealed by a thin coat of pink ruffle doilies. 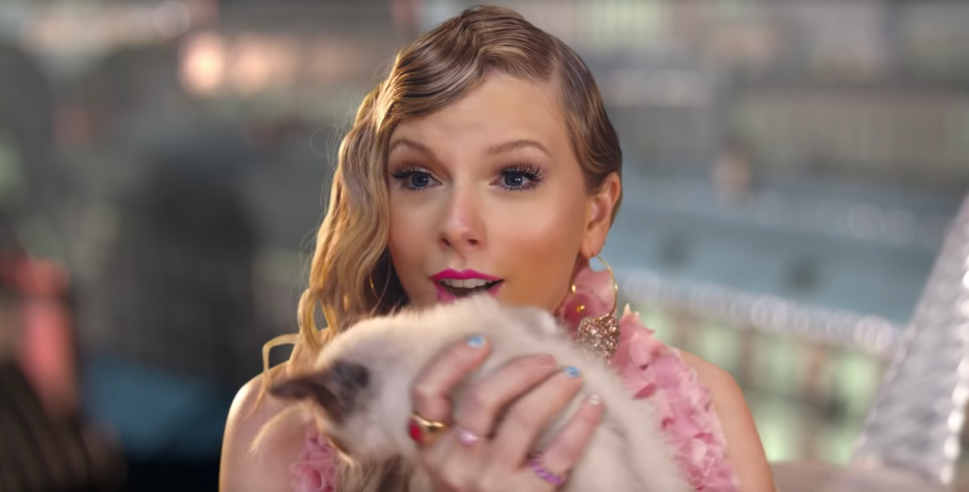