Patience is a virtue. After nearly a dozen aborted attempts over three decades, Terry Gilliam’s The Man Who Killed Don Quixote is hitting movie theaters, with Adam Driver as a modern-day ad executive and Jonathan Pryce as a deluded shoe cobbler who believes himself to be the famous literary errant knight tilting at windmills.

The acclaimed, 78-year-old visionary behind movies like Brazil, The Fisher King and Twelve Monkeys is a famously florid auteur of insane visions who celebrates fantasy as the ultimate coping agent in a cruel world. And the eponymous, near-mythic hero of Miguel de Cervantes’ 1605 novel Don Quixote is arguably the patron saint of Gilliam’s maniacal misfits.

The director’s quixotic efforts to make Quixote are legendary in Hollywood. The darkly comic 2002 documentary Lost in La Mancha documented his travails with torrential rainstorms, NATO jet planes, a lead actor with a debilitating prostate infection, and an insurance company that ended up pulling the plug. And now, despite all the setbacks, he has finally turned this nightmare production into the ultimate dream project.

The London-based Gilliam spoke with Observer about the saga of making this film, his kinship with the Coen brothers and why he doesn’t really like reasonable people.

Observer: Congratulations on finally getting Quixote made after 30 years. You first pitched it in 1989, correct?
Yes, to producer Jake Eberts, after we finished The Adventures of Baron Munchhausen. I said, “Two names: Quixote and Gilliam. I need 20 million.” He said, “You got it.”

Back in 2000, when Quixote starred Johnny Depp and Jean Rochefort, the budget had grown to $40 million, which then got cut to $32 million before it fell apart. And now, in 2019, the film ironically ended up costing less than that original $20 million.
One of the smarter things we did to save money was not make a period piece. Originally the script was much more like A Connecticut Yankee in King Arthur’s Court. A guy gets bumped on the head, ends up in the 17th century. The script now is much better. The idea that it’s about filmmaking, and the consequences of being in a film or making a film and succeeding, all these things are in there.

It’s a remarkable, and poignant, confession of how filmmaking, as creative as it is, also has a destructive side. It can certainly take its toll on people.
It was really as a result of a sense of guilt over making Monty Python and the Holy Grail in a little village in Scotland. We were effectively like the Vikings, coming and raping and pillaging. Everybody loved us up there. But, when we finished, all sorts of people were following us down to London. Marriages were breaking up. It was the ruined lives I thought a lot about.

I’m not a mountain climber. I don’t do any of those dangerous physical things. So I do dangerous mental things instead. The idea of perseverance, despite all the obstacles in your way, intrigues me. And sadly, it seems to me, if you’re going to do Quixote, you have to get caught up in a quixotic adventure.

You once said you admired Brad Pitt on Twelve Monkeys because of his Midwestern work ethic, which you attributed to him being from Missouri. You’re originally from Minneapolis, so I assume you share that work ethic?
I think so, probably. There is the Midwestern Protestant work ethic. The reason for living is to work. And once you commit to something, then I think you’ve got to finish it. So that’s, I guess, the way my tiny brain functions.

Joel and Ethan Coen are from a Minneapolis suburb. And I think of both of your world views are very absurdist, dark and fatalistic.
I think so. Theirs is a bit more pessimistic, I think, because they’re Jewish and I’m Protestant. (Laughs.) No, but I do love them for that, and I just love their rather perverse, ironic approach to things. They actually love films more than I do. That’s the difference, because their films are really about films. Quixote is the closest I’ve gotten to making something about films.

Quixote is a beautiful summation of the ideas, themes, and sentiments in your films. This shows all of the facets of your career. Was that intentional?
It’s my Fanny and Alexander. I was thinking of Bergman’s Fanny and Alexander, I was thinking of Fellini’s Amarcord. Those kinds of movies always stuck with me. These are filmmakers who, later in their careers, try to sum up their lives in many ways. It’s not a thing you normally do, but it kind of became like that to me.

Most people haven’t read Cervantes’ Don Quixote. I, admittedly, haven’t. And, reportedly, when you pitched Quixote in 1989, you hadn’t read it either.
Correct. (Laughs.) Like most people, we all think we know what Don Quixote is. We know the iconic images. But then you get into the book and it’s very different. The thing I’m criticized for is not having a tight structure. But the books are not tightly structured. They’re picaresque tales. And that intrigues me.

I’ve met both the most respected translator of Cervantes in Spain and the same in France. And they saw the film. And when I met them, they responded, “You got it. You really got the sense of what Cervantes was dealing with.” And I thought, “That’s the best review I’ll ever get.”

Cervantes wrote Don Quixote 400 years ago as a critique of the explosion of books and plays and culture at the time. It was a response to information overload and not knowing what reality is anymore. In our post-internet, Trumpian, Brexit world, Quixote feels even more apt.
Everything seems to be a lie now. Everything. And every night in England, we’re listing to the Brexit parliamentarians bullshitting about why we should be getting out or not getting out. Nobody’s making real decisions. It’s like we’re looking down into a flushing toilet bowl. This spiraling down is basically just sucking the shit out of our lives. It’s horrible.

What’s so lovely about Don Quixote is this idea of chivalry. He has a moral core.
That’s the key to him. He’s noble. He sees a better world, a more noble, more adventurous world.

You once said that the heroes in your films don’t win, they survive.
I just put them through a lot of rough times. You don’t just triumph and walk away the winner. Life continues.

Why do you think it’s important to be tested?
If things get too easy, you just get flabby in the way you think and do things. And if I had enough money, I would probably never get anything done. I think never quite succeeding keeps you on your toes the whole time. It’s become perverse.

Wait ’til you see the follow-up documentary to Lost in La Mancha. I think it’s entitled A Sad Old Man. You will think I’m on my deathbed during the shooting of this film.

What are you going to do now without Don Quixote in your life?
That is the big question. I don’t have a fucking idea what to do next. I want to get away from everything and just do some stupid manual work. 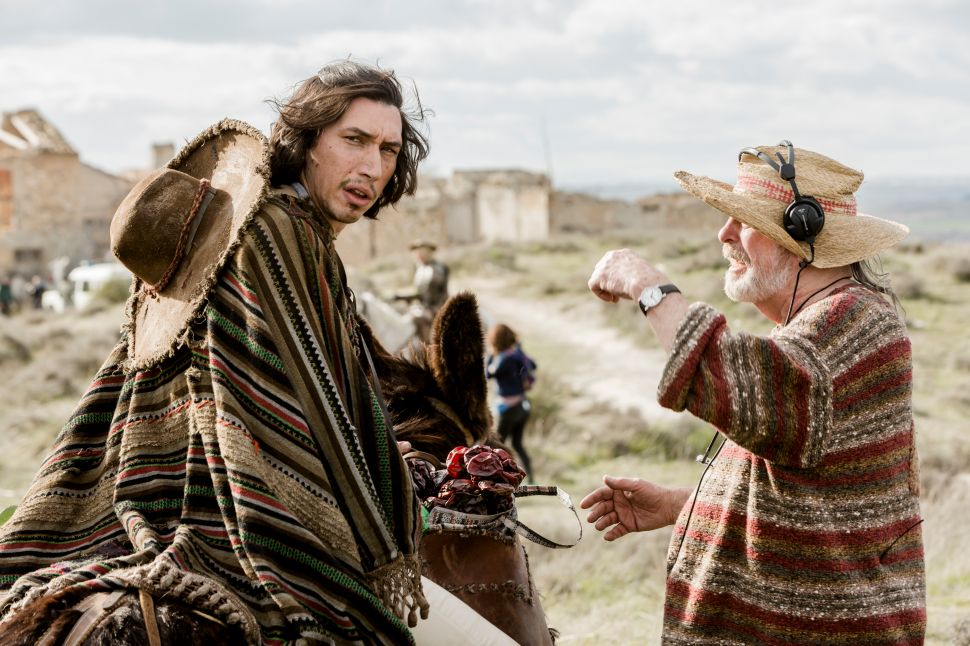