When Elon Musk announced that Tesla was finally out of the Model 3 “production hell” last July, it was a major relief to Tesla investors and customers, despite the fact that the company had yet to prove it could keep selling cars and be profitable. Musk has said that conquering the product bottleneck had taken an “excruciating toll” on his personal well-being. But what he didn’t share (or didn’t know) was that Musk and his staff weren’t the only ones who paid the price for Tesla’s forced growth.

Another deeply affected party was Japanese electronics giant Panasonic, who has been Tesla’s sole battery provider since 2009. That relationship is absolutely vital to Tesla, because batteries make up about half of an electric vehicle. But this week, Panasonic decided that it would stop investing in Tesla’s Gigafactory 1 in Nevada, which makes batteries for the Model 3. It will also pull out of a planned investment in Tesla’s Gigafactory 3 in China, which is currently under construction.

The Nevada factory currently has the capacity to supply batteries for 500,000 cars annually. Panasonic manufactures the cells, and Tesla combines them into battery packs before assembling the cars in its California plant. With Panasonic’s new investment, estimated at 100 billion yen to 150 billion yen ($900 million to $1.35 billion), Tesla’s original plan was to increase the Nevada plant’s capacity by 54 percent by 2020.

Tesla has said its short-term target is to sell one million electric vehicles a year. Last year, Tesla sold nearly a quarter million cars. This year, it plans to increase the delivery from 360,000 to 400,000. Reaching one million still seems distant as Tesla starts to face pressure on the demand side, especially in the U.S., where federal subsidies for electric vehicles are phasing out.

Since becoming a partner in 2009, Panasonic has invested $30 million in the Nevada factory. But it has failed to see any financial benefit so far.

“Both Tesla and Panasonic continue to invest substantial funds into Gigafactory,” Tesla said in a statement Thursday. “That said, we do believe there is far more output to be gained from improving existing production equipment than was previously estimated. We are seeing significant gains from upgrading existing lines to increase output, which allows Tesla and Panasonic to achieve the same output with less spent on new equipment purchases.” 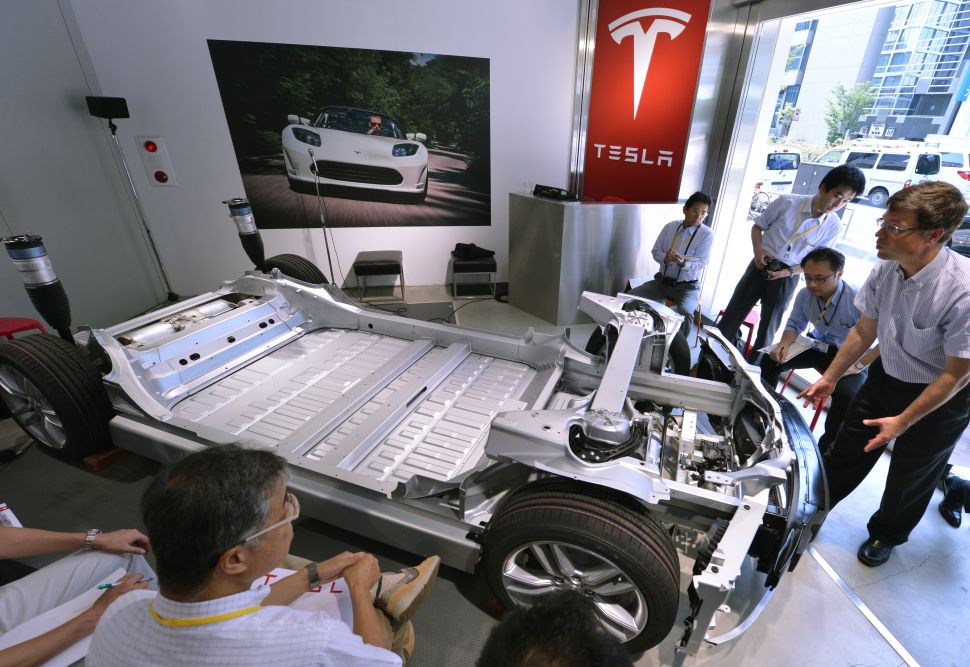