It’s been a very eventful few days for the “millennials and alcohol” discourse. On Tuesday, The Atlantic published a piece that posited that based on contributions from “more than 100 Americans in their 20s and 30s,” millennials might be cutting back on their booze consumption. Writer Amanda Mull argued that although there’s no definitive statistical evidence that young adults are dramatically altering the way they drink, what can be detected is a palpable shift in mood—a low-boiling general consensus that drinking isn’t as fun as it’s supposed to be.

Meanwhile, Shannon Palus at Slate noted, “It could be that if you talked to twenty- and thirty-somethings in America at any given moment in time, no matter the year or generation, you’d find that many are rethinking their relationship with substances as they enter middle adulthood. In other words, if millennials are doing anything together, it’s aging.”

If we can extract anything from this outpouring of commentary on alcohol use (a conversation that has existed ever since the practice of fermentation was invented, by the way), it’s that the idea of drinking and its attendant perceptions are just as complicated as the layered cocktails and stiff whiskies we sip. Ultimately, though, abstaining from liquor shouldn’t be that big of a deal. Whether you’re an alcoholic in recovery, a lifelong teetotaler or simply keeping things in check, everyone deserves a public space where their proclivities will be respected, welcomed and even celebrated. With that in mind, we’ve rounded up six bars in New York City where you can grab a good mocktail. Some of these joints are entirely alcohol-free, while others offer comprehensive nonalcoholic cocktail lists that will blow your mind. Cheers!

Listen Bar may not have a brick-and-mortar location yet, but that hasn’t stopped this upstart from becoming one of the most promising alcohol-free spots on the New York City party circuit. On the strength of a couple of raucous pop-up events, Listen has locked down a monthly bash at Von Bar (which boasts a basement dance floor), and its cocktail developers have dreamed up a huge menu of inventive drinks, none of which include a single drop of booze.

We suggest the What’s Ur Rising Sign (Palo Santo, lavender bitters, Marigold and the nonalcoholic mood lifter Kin Euphorics) and the Spicy Titties (lime, cilantro, jalapeño, grapefruit and the Mexican soft drink Jarritos), but they’re just the beginning as the concept gains momentum: As of this week, Listen Bar’s crowdfunding effort to raise money for a lease has netted $21,525.

Jean-Georges Vongerichten’s vegetarian eatery abcV looks like a sobriety space hangar in the best possible way. The restaurant is located inside the E. 19th St. ABC Carpet location, so if you’re the type of person who likes to spend your after-work hours wandering wistfully through home goods stores while blithely posting updates to your Instagram story (hell, I know I am), then this is the endlessly lovely spot for you. But first, some important information: The drinks here are not called cocktails, but rather “restorative tonics.”

Its list of sippers, titled Vibrations, includes beverages so healthy-sounding they would intimidate Gwyneth Paltrow. Plus, their names are just great (though you’re gonna have to look up some of the ingredients). There’s Elevate (rhodiola, St. John’s wort, Albizia, rose black currant and tangerine) and Feel (elderberry, catuaba, Damiana blood orange and earl grey), but our personal favorite is Connect, which includes blue lotus, Skullcap, Kava Sea buckthorn, lime and agave. Because after all, isn’t any drinker just trying to connect in the first place? And who needs booze when you have Kava Sea buckthorn?

Fair warning that this Greenwich Village watering hole is usually packed, bustling and clamoring with loud voices on weekday evenings—that’s how good its cocktails are. If there’s overflow when you arrive, an attentive host or hostess will approach and ask if you’d like anything to sip on while you dawdle in the foyer and wait, and that’s partly what cements the bar as a neighborhood staple worth its salt. The other factor, of course, is those drinks.

Existing Conditions does something we’ve seen almost no other NYC bar menu do: It lists its nonalcoholic options first. Rather than being relegated to footnote status, these zero-proof cocktails are front and center, which feels particularly significant in a place so synonymous with inebriation that “Boot and Rally” could replace “Excelsior” as the state motto and no one would bat an eye. The drinks are a wee bit pricey, but worth it. Among the best are the Stingless (clarified lemon, vanilla and carbonated Melipona honey from the Melipona honey bee, “the only natural pollinator of vanilla orchids”) and Horse and Carriage (carbonated clarified Granny Smith Apple, clarified carrot and Tazmanian pepper berry).

Mother of Pearl is a “post-modern Polynesian restaurant and cocktail bar” located at 95 Ave. A on the outer lip of Tompkins Square Park, and, point blank, it is gorgeous. Its subway-convenient location is a perk, and aesthetically speaking, it comes as close as anything we’ve seen on the East Coast to the Vanderpump Rules look. Lush white curtains, abundant ferns, cool greens and ocean blues populate the space, which offers “regular” cocktails for those not abstaining as well as a nonalcoholic Virgin Isles drinks list rife with healthy, fruity options. Most tempting is the Eastern Spice, which features guava, cinnamon spice, lime, black pepper syrup and soda .

This doesn’t hold true for all nonalcoholic options, but in general, booze-free beverages tend to fall on the simple or blandly fruity side. The conventional wisdom seems to be that if you’re not trying to get tipsy in a social setting, you’re left to ponder basic solutions like soda, seltzer or something juice-adjacent.

Not so at Sunday in Brooklyn, which sits in the shadow of the Williamsburg Bridge. The Zero Proof menu here is positively lush. Ponder, if you will, the Blackberry Julip (shiso, blackberry, vanilla and sherry vinegar) or the Celery Collins (celery, pandan, lemon, pink peppercorn, salt and soda). The crown jewel, however, is the decadent Gold Crush, which features a mouthwatering combination of Seedlip Grove, turmeric, ginger, honey, lemon and Aztec chocolate, which can be served hot or cold per your request. Your Pabst Blue Ribbon is positively shaking.

Full disclosure: Getaway in Brooklyn isn’t open yet (it will be in another few weeks, according to Amanda Mull’s aforementioned article), which is evidence that drinking establishments selling beverages that don’t get patrons drunk are still in their infancy, culturally speaking. However, “their beverage options don’t resemble anything like sugar-soaked virgin piña coladas, daiquiris or Shirley Temples,” Eater reports, and as far as the vibe is concerned, we can certainly expect a bar whose owners are sensitive to how certain assumptions about alcohol are inherited. “It feels to me like the older people are, the more they see [our bar] as a thing for sober people,” Getaway co-owner Sam Thonis told The Atlantic. “They see it as black or white—you drink or you don’t drink. With younger people, there’s a lot more receptiveness to just not drinking sometimes.” 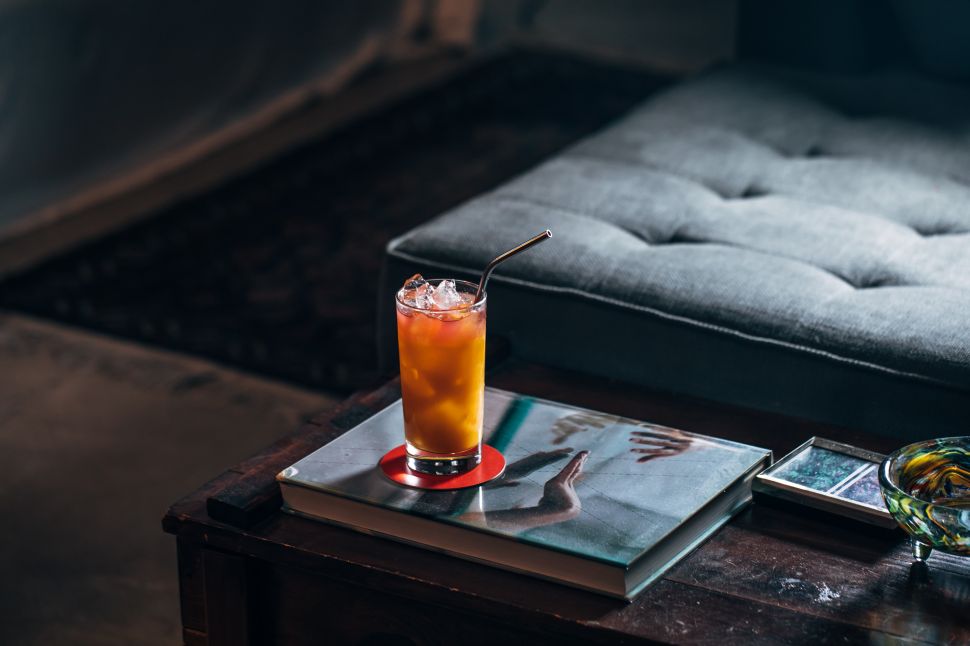