“The Shed is the museum of the future,” the new cultural hub’s board vice chairman, Jonathan Tisch, proudly told the assembly at a press preview this Wednesday. The description provides a far more concise vision for the center than last year’s commissioned 50-page manifesto by curator and scholar Dorothea von Hantelmann and proved a rallying call for the day’s events. This half-billion-dollar marriage of public and private funds brings an eight floor, star-studded arts center that will commission, develop and present works from all creative disciplines at all stages of artists’ careers. It opens Friday, April 5.

Tisch’s words might have been the only ones spoken by an official that didn’t exhibit a complete disconnect between what was heard and what was seen. There’s some question, though, as to whether that future is one we should be excited about. Our governments are failing, opportunity is shrinking, and fake news surrounds us. A healthy vision of the future would provide an alternative to that reality. The Shed reflects it.

Now, I say that with the necessary caveat that the cultural hub has rolled out only a fraction of its planned programming and has yet to demonstrate the nature of its footprint. My first impressions may need to be reevaluated.

What I won’t need to reevaluate, though, is my assessment of the new building, a 17,000-square-foot warehouse-like space by Diller Scofidio + Renfro, (lead architect) and Rockwell Group, (collaborating architect), billed as some sort of marvel of modern technology because it has a retractable roof. Much like conceptual art, architectural projects come with no shortage of talking points. For the Shed, two come up frequently. One is the movable hood that connects the building conceptually both to the High Line, a park built on an elevated freight line, and the location’s previous life as a train yard. The second is its architectural inspiration, that being Cedric Price’s unrealized modular masterpiece Fun Palace (1959-1961), which imagined a structure that would use technology to respond to people’s needs.

None of this is of any consequence, though it did lead to the idea that the museum is a work in progress—a concept I hope has some sticking power. The “enormous tectonic foreskin” (as Artforum’s Claire Bishop put it), breaks no new ground by simply expanding on its own property. The roof is just gimmicky nonsense that will do little more than interrupt the flow of pedestrian traffic every time it shifts size.

Unfortunately, this kind of puffery isn’t isolated to the building. For close to an hour on Wednesday, white male millionaire after white male billionaire spoke about the value of access and diversity, without attempting to articulate what that term might mean, let alone acknowledging their own lack of it. Ten dollar ticket prices were vigorously applauded as if they weren’t still prohibitively expensive for those communities they were intended to benefit. Tamara McCaw, the Shed’s chief civic program officer (and the only person of color to speak that day), talked for only four minutes of the more than 50 discussing the programs serving neighbors and low-income residents throughout the city.

Other than that, only artistic director and CEO Alex Poots’ statements might be described as an attempt to articulate diversity. As Poots sees it, the Shed’s mission of creating parity by commissioning across performing arts, visual arts and popular culture will allow it to “get away from this high art/low art,” emerging/established stratification and thus reach a broader audience. Trust, Poots says, is key.

These are not new ideas. In fact, they’ve been around long enough that it’s worth asking why New York needs a mega arts complex dedicated to pursuing such an outdated concept. If social media has already achieved a greater literacy of all cultural economies—and it has—the Shed reduces the arts to a mere tool used to pursue and maintain the status quo.

To be fair, though, it’s probably too early to assess its programs beyond basic observations. Notable for their scale and ambition—not to mention sheer volume—they impress. On the immediate line up, a series of performances by African-American musicians organized by Steve McQueen will christen McCourt, the Shed’s concert hall that can house up to 3,000 standing people. The Broadway-like musical, Norma Jeane Baker of Troy, by poet Anne Carson and starring Renée Fleming and Ben Whishaw, launches simultaneously in the 11,700-square-foot Kenneth C. Griffin Theater, which seats 500. A Gerhard Richter, Steve Reich, Arvo Pärt collaboration opens the yet-to-be-named visual arts galleries on the fourth floor, and an exhibition by sculptor Trisha Donnelly will go on view this weekend.

If I’m honest, though, a lot of what I saw worried me. It’s not just that the superstar white male artist coupling of Reich-Ritcher-Pärt represents the opposite of equalized opportunity the Shed proudly describes, but that the work itself was so tremendously bad. For the show, Richter made a series of digital Rorschach collages from his 1990 abstract painting Abstraktes Bild (also on view), printed them out in long strips, and pasted them on the walls. (The exhibition also includes three jacquard tapestries.) They’re little more than digital print outs, so the art has no presence in the space. The work isn’t complete, though, without the paired corals sung by the Choir of Trinity Wall Street. These sound nice, and there are connections—the repeating structure of the choir music relates to Richter’s patterns, which in turn relates to Sufism and the culture of Persia. But even after making these connections, I didn’t care. They seem simplistic and designed to afford both the music and the wallpaper undue importance.

Richter was by far the worst of the programming, but I’d be inclined to forgive it, were it not for the willed obliviousness swelling around the entire project. Its peak moment occurred late in the preview, when the remaining press were treated to a five-minute excerpt of the upcoming dance-cum-kung fu performance Dragon Spring Phoenix Rise. Directed by theater director Chen Shi-Zheng and written by Kung Fu Panda’s Jonathan Aibel and Glenn Berger, the wordless piece, performed by one African-American and three Asian dancers, imparts the story of a secret sect in Flushing, Queens, that possesses the power to extend human life.

When asked for the rational for the racial casting of the dancers, Poots replied quickly.

“We cast blindly,” he said, only to have those words quickly countered. “But you don’t look blindly,” the questioner retorted.

For me, this exchanged summed up the often jarring difference between what officials say about the shows, and what they mean. The problematic position of “not seeing color” has been so widely criticized, a near-1,000 word, densely cited section on Wikipedia exists on the subject. It contains, amongst other things, a quote by author Christopher Doob who describes “color blindness” in his 2013 book Social Inequality and Social Stratification in U.S. Society as a kind of racism, driven by “whites’ assertion that we live in a world were racial privilege no longer exists, but their behavior supports racialized structures and practices.”

In this case, we have the Shed, a museum claiming diversity, access, and parity among artworks, and a press preview that sidelined the core programs that would achieve that for a carnival of attractions. The whole scenario is depressingly familiar enough that Tisch’s description of the Shed as “the Museum of the Future” sticks out as prophetic. What he didn’t say, and what we as citizens have to remember, is that these institutions are there to serve us. If we don’t like the future we see, it’s up to us to change it. If the Shed is, as Elizabeth Diller suggested, a work in progress, we must identify what doesn’t work and demand change. A responsive museum of a future that will adapt in kind. 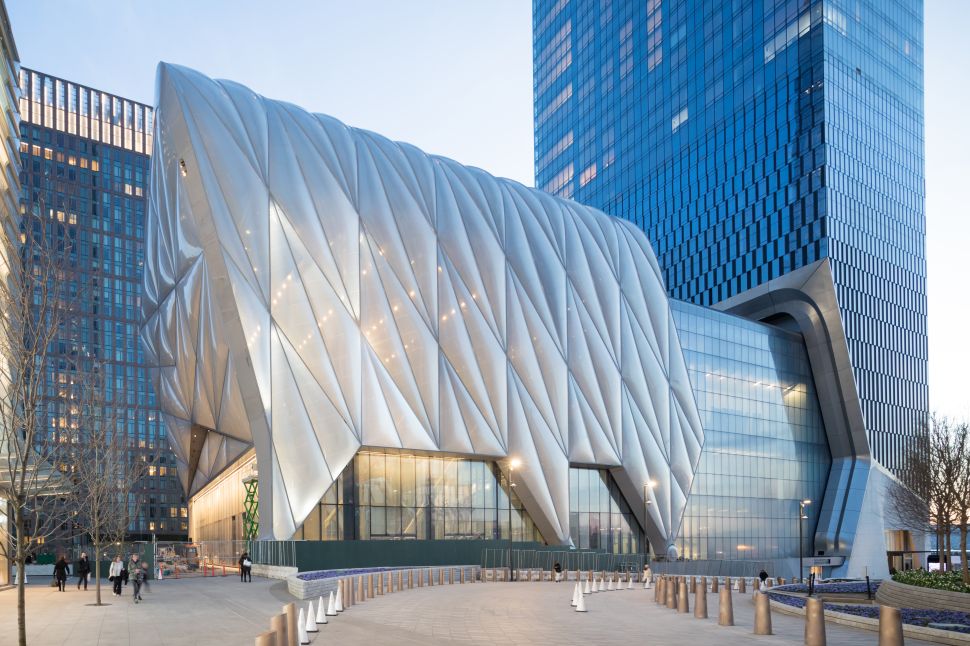