If you’re a fan of the 1982 movie with Dustin Hoffman (and who isn’t?) then don’t bother to check out the new Broadway musical Tootsie. Numbingly directed by the usually astute Scott Ellis—with appallingly ugly sets and costumes, atrocious jokes masquerading as a “book,” and a trunk full of dopey, derivative songs that all sound alike but pass for a “score”—it does nothing to remind you that it was once an original film that revitalized movie comedy except resuscitate the premise.

Hard to believe, but people still find the sight of a man in mascara, marabou feathers and Joan Crawford hump-me pumps uproariously funny. This aborted attempt to bring Tootsie up to date has nothing else going for it except the hope that audiences will bus in from Jersey to find drag queens positively irresistible.

The show is a mess, but my admiration is boundless for a talented and industrious cast dedicated to milking it for all it is worth (and a lot of what it isn’t). The movie was a lively look at the brain-atrophying world of daytime television soap operas, as well as a crisp and often heartbreaking comic mirror to the awful indignities actors suffer every day of their professional lives—the desperations, rejections and overwhelming odds against survival they face in order to make a living.

More important, it said something poignant about the way artists define their always changing identities in terms of role-playing, both on and off the stage and screen. The new musical shifts focus to the mediocrity of modern Broadway and proves that mediocrity usually equals Tony Award–winning hit status. Judging from the shrieking, thigh-slapping audience guffaws at the press preview I attended, Tootsie qualifies already.

Michael Dorsey (Santino Fontana, in the role created for Hoffman) is a 40-year-old actor who is too sensitive and idealistic to exist in a profession dedicated to bad taste. He is also arrogant, difficult and too frustrated to put up with it anymore. Like the ragtag character James Coco played in Neil Simon’s movie Only When I Laugh, Michael is the kind of actor who can’t even pass the audition for a hemorrhoid commercial.  He’s played tomatoes, cucumbers and Shakespeare, but as his agent (Michael McGrath) reminds him just before he fires him, his reputation is so bad that he’s been steadily unemployed for most of his career.

The only thing left is to become someone new. So Michael dresses up like Polly Holliday in Flo and changes his name to Dorothy Michaels, landing the role of “the nurse” in a musical production of Romeo and Juliet, and before you can say “Dame Edna,” the girl who plays Juliet (Lilli Cooper) and the brain-dead but camera-ready Max, the ham actor who plays Romeo’s brother Craig (a really hilarious John Behlmann, who stops the show every time he rips off his shirt and shows his Actors Studio pecs) both fall in love with him, but only as a woman. Never mind the fact that Juliet realizes she might be a lesbian; she’s ready for anything.

As for Max, he confesses to Michael—er, Dorothy—”You taught me how to be a member of a company—and tonight my member gets thrust into your opening!” The show has its moments, although some of the jokes don’t work. Michael’s roommate says “Riverdance was invented by someone with seven kids and one bathroom.” Sorry, but I don’t get it. Other jokes are just idiotic. In response to a speech about a river in Crimea, someone says, “Crimea river?” OK, I get it, and I wish I didn’t. Its rhyming of “real good” with “Gielgud” is a prime example of why Tootsie is dead on arrival.

It’s hard to imagine such overripe tripe was written by the same Robert Horn who created the clever TV series Designing Women, but really more astounding that the dreadful and tuneless songs are by the same David Yazbek who charmed the world with the wit and melody-infused originality of The Band’s Visit. He seems to have gone tone-deaf. Get this for lyrics:

“I won’t have any breakfast…

Like when you have to go and get a colonoscopy.”

Or how about this, when Juliet rises from the dead and sings:

Luckily, the cast is so engaging everyone manages to find their own way to crawl out of the muck without permanent damage. Michael’s neurotic ex-girlfriend Sandy (Sarah Stiles), who says things like, “I live in an apartment so small I consider the litter box a guest bedroom,” tackles a patter song called “What’s Gonna Happen” by running through it like it was the New York Marathon. Julie Halston lives up to her reputation as the funniest woman in New York as the producer who changes the name of the show from Juliet’s Curse to Juliet’s Nurse. Veteran performer Reg Rogers is a perfect pompous ass as the show’s director.

But the fact remains that Tootsie is putty in the hands (and high heels) of Fontana. He’s so preposterous as a woman that it’s another example of the show’s ineptitude that nobody notices his Adam’s apple. But Fontana can sing (sort of) and dance (a little) and look good (if somewhat matronly) in a wig, false eyelashes and press-on nails. It’s not his fault that Denis Jones’ clumsy choreography has the fizz of a day-old smoothie in a cardboard cup.

Despite the fact that everything in Tootsie is designed to support the premise that all you have to do to make people laugh is put a guy in a girdle and watch him squirm, Michael discovers he’s a better man as a woman than he ever was as a man. The things he learns to detest as Dorothy about the men who treat him crudely are the same things he’s done to other women himself as Michael. With his Barbra Streisand fingernails, Bette Midler nose and Scarlett O’Hara falsetto, he fools everyone around him, but he wouldn’t fool any street-smart New Yorker who’s ever been to the Christopher Street Halloween parade.

Hard work shows, and this show has a lot of energy, but in the final analysis, Tootsie ends up being the same kind of vulgar, tasteless, cartoonish Broadway musical it sets out in vain to satirize. Toot-toot, Tootsie, goodbye.

Correction: An earlier version of this article mistakenly referred to the composer as Tony Yazbek. His first name is David, not Tony. 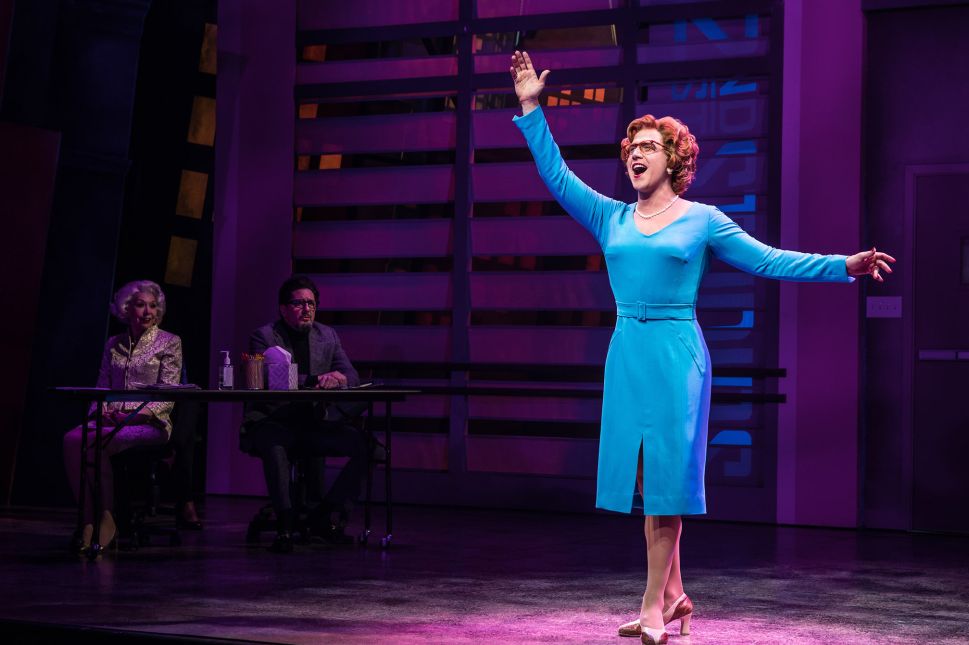