As all but the mega-galleries empty out of Chelsea, a new arts district emerges—Tribeca. The Bronx Museum set up their satellite residency there earlier this year, Canada and Denny Dimin have each announced plans to open this Spring and James Cohan will land in the neighborhood this fall. They’ll be joining a handful of pre-established galleries, including Bortolami, Alexander & Bonin, Postmasters and longtime resident Apexart.

A recent tour of these Tribeca-based galleries offers a slightly different twist on the above narrative. It reveals an arts district in full bloom and one that will only increase in prominence with the arrival of these new galleries.

This month, that maturity feels especially strong in the field of artists working with the moving image. Whether it be video games, VR technology or performance-based video, these artists use technology to mine the emotional territory of sadness, terror, hopefulness and, unexpectedly, donuts.

A singular voice and perspective unify the works in the show, as well as a relatively modest approach. Unlike the vast majority of games made by armies of game designers that take months to complete, individual artists created the games and videos on display, which take anywhere from a few minutes to consume to a couple of hours. While playful, most of the material in the show feels emotionally damaged in one way or another. Devi McCallion’s music video “Bloodeater,” for example, pictures a filtered black, white and red image of McCallion singing against electronic video game music. “I hate every choice I’ve made, so I have no choice but to move forward,” she sings. “I’m going to fucking jump, I’m going to fill my lungs…I’m going to love myself.” The desire for self-love barely tempers the will to self-destruct.

Transgender artist Tabitha Nikolai’s “Recursion Plaza” may be less angry, but it’s crushingly bleak. For this game, a user must navigate a modular labyrinth of 3-D modeled office spaces, empty but for a few garbage bags. There’s no evil monster to conquer, but players can’t escape. Stretched out photos form the vistas viewed from windows and balconies—real life, distorted. A fall from a ledge lands players back in the same area, and a reset button changes the layout of the space, but not the game. At one point, a gamer will discover a small video kiosk picturing a player navigating rooms, just as they have been doing. It’s a profoundly unsettling experience.

There are some lighter moments to balance the mood. For example, Thecatamites’ Octopus Decision begins with the command, “PICK A SIDE MOTHER FUCKER.” Two choices exist—“I’m friends with the octopus” and “I’m against the octopus.” I only know what happens when you chose the “friends”—users land in the “Friendly Octopus Zone,” a peaceful screen of smiling octopus cartoons. Bliss.

Short-lived bliss. Over at Postmasters, the nomadic duo of Polish new media artists Ewelina Alexandrowicz and Andrzej Wojtas, known as Pussykrew, present The Bliss of Metamorphing Collapse, a multiscreen video installation and a dystopic VR world of colliding worlds. Nothing happens in these spaces. A space station, a modernist start-up building in ruins and a glowing byzantine church all resemble stages for which narratives have either already played out or have yet to happen. For example, in one scene on the VR headset, large insect monsters patrol the circumference of the church, and on another, waves crash quietly near a motorcycle frozen mid-flight.

Although there’s not much figuration in these works, the artist collective’s approach to art making ties to Post-Humanism, a movement coined by dealer Jeffrey Deitch in 1992 that described artists who, with the help of technology, see the body as malleable material. Pussykrew applies this philosophy to pretty much everything. The world is an oyster from which they can reshape the body, the physical realm, and even time itself. To wit, the worlds created by Pussykrew share a similarity with those of ancient history—St. Mark’s Basilica in Venice, for example, assembled with materials plundered through conquest. This work is a little less colonial in nature, though the act of gathering 3-D building scans to create massive worlds maintains an element of proselytizing. A new vision of the universe is out there, and Pussykrew wants to build it.

If Pussykrew plays the architect, Bortolami’s Aki Sasamoto takes the role of the inspector. Her 20-minute video, Do Nut Diagram, begins with a single donut suspended in front of a picturesque forest scene and ends with the dessert lying amongst shattered glass. In between, a performance reveals three transparent sheets of tempered glass separating the viewer and the forest. Early on, a sheet becomes apparent when Sasamoto shatters it. Later, another materializes when she etches out a Venn diagram on the glass and greases it with another donut. By the end, she releases the donut and shatters the last piece of glass, leaving no barriers between the viewer and the forest.

There’s a small thrill each time the artist renders an invisible element visible and removes it—perhaps because the act provides a useful reminder that everything we see, no matter how inconsequential, is positioned and framed. Without disruption, there may be no way to discern that the mediation of images exists, let alone how.

In that way, the work has a lot in common with other videos on view in Tribeca, which reject conventional framing in favor of their visions. It isn’t all friendly—in fact, Porpentine describes her show as “slightly radioactive”—but it’s honest, which might be the strongest recommendation of all. 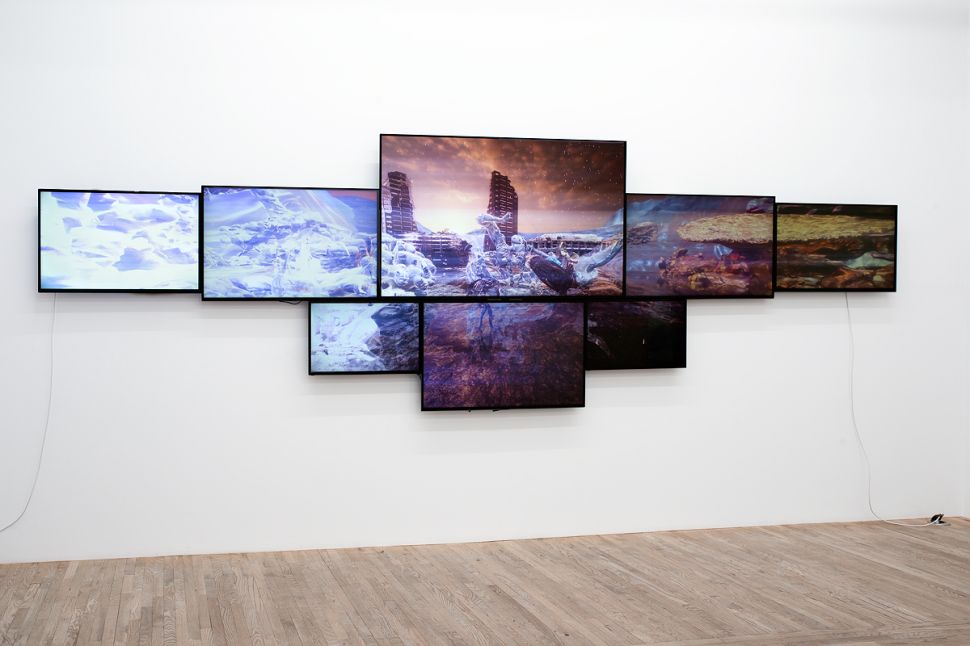