Something’s up with Taylor Swift. Last Saturday, the mega-famous pop singer started a countdown leading up to April 26 on her Instagram stories, and she’s been posting intriguing images captioned with the same date ever since. Die-hard fans are convinced that these tantalizing social-media hints are proof that new music, or perhaps an entire album, is on the horizon.

Since her eponymous debut album was released in 2006, Swift has released a new album almost every two years, pretty much like clockwork. Then came a three-year gap between her infectious 2014 stadium soundtrack 1989 and 2017’s divisive Reputation, which found our wistful romantic heroine experimenting with much more cynical songwriting. Swift’s lyrics have always been gloriously cutting, but songs like “I Did Something Bad” and “Look What You Made Me Do” seemed to flirt with something distinctly darker: the artist’s impulse to unmask the most vindictive corners of her formidable psyche. Reputation’s album sales were considerable as always, but critical and fan reactions were mixed—and Swift reads everything.

It’s 2019 now, and a lot has happened since Swift’s last album cycle. She was shut out at the most recent Grammys; she started speaking out about her political beliefs under the oppressive umbrella of the Trump presidency; and she got a supportive, if slightly bland-seeming boyfriend—the handsome and tight-lipped English actor Joe Alwyn. While it’s impossible to predict with certainty how new songs from Swift would reflect her artistic and personal development over the past couple of years, the pictures she’s posted on Instagram definitely provide clues.

First of all, these posts are instantly recognizable as a radical departure from Swift’s Reputation era, which was defined by snake emojis, onyx and red set design and an overall sense of rageful indulgence. The images she’s currently uploading—a sparkling diamond heart-shaped ring, pastel-fingernailed hands clutching a yellow jacket, a close-up of fluffy tulle fabric and a snapshot of her two Scottish Fold cats, Meredith and Olivia—are saturated with baby pink and Easter-adjacent energy. They project a startling and unambiguous sweetness.

As with anything Taylor Swift does, these Instagram pics have inspired a lot of clever internet humor.

But more fascinating than cracking jokes is contemplating what exactly she’s up to. We know Swift is a calculating observer of everything going on in the pop landscape. Therefore, she must have noticed the meteoric rise and eventual ubiquity of Ariana Grande, an artist who pushed through tragedy to release her two biggest albums to date (Sweetener and Thank U, Next) within a single year.

While Swift has refrained from engaging too much with social media, Grande lives on it, keeping her fans abreast of her thoughts, goings-on and cloudy coffee beverages with her frequent dispatches. Her endless sharing and accessibility have paid off: Grande is now the world’s most-followed woman on Instagram.

We’re willing to bet that while Swift may not be online constantly, she’s almost certainly noticed that Grande’s music is as earnestly wrought as it is shot through with sly one-liners. In other words, she’s sweet. What’s more, Grande’s visual aesthetic is positively saturated with baby pink, gray and lavender. Is it possible that Swift has taken notice of Grande’s incredibly successful formula and is plotting accordingly?

Another theory? The aforementioned pink diamond ring is an engagement ring from Alwyn and Swift will soon announce she’s getting married. This seems unlikely, though. Why would this famously private blond power couple ever trumpet their relationship so explicitly?

Ultimately, we’ll just have to wait and see what the artist gives us. After all, we’re on her schedule. Swift, like many other superstars, hasn’t given a comprehensive interview to a journalist in a long time. She prefers handing out scraps of information and staying totally in control. Given her reputation, this is hardly surprising. 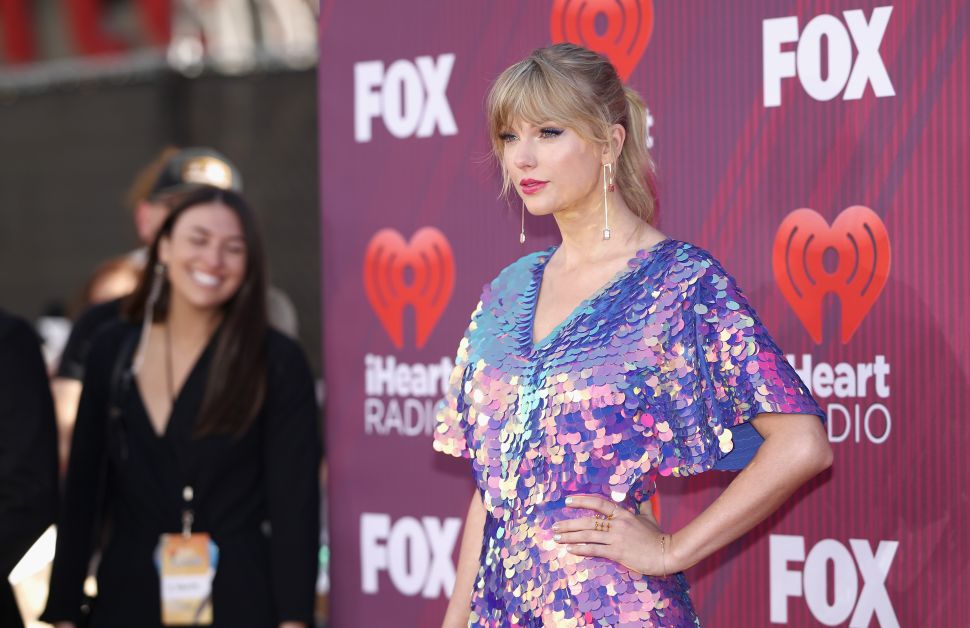