Jackson Hole is known for its world-class skiing and luxury retreats, each one offering its own stylish interpretation of the cozy Western mountain town and its pristine surroundings. With its exceptional service and seemingly endless fancy amenities, Caldera House is its latest opening of distinction, joining the ranks of Aman and the slopeside Four Seasons, albeit on a slightly smaller scale.

With eight sophisticated suites, a lobby, a communal lounge area, a refined restaurant, a spa and a retail space, Caldera’s “house” is more intimate than some of the other posh accommodations in the area. Since its official unveiling this past summer, it has been welcoming guests for its first ski season ever in a decidedly private and personalized way, drawing the likes of Mandy Moore and Olympic ski racer Bode Miller, who recently hosted a ski experience there. Given Jackson Hole’s solid snowfall this year—which resulted in a season that’s been top-notch—guests continue to flock to the mountain refuge for their taste of unparalleled spring skiing. But after the season officially draws to a close, they’ll begin to descend on the region for its acclaimed spring and summer months, which are dominated by fly fishing, hiking, whitewater rafting and a myriad of other nature-fueled activities.

Despite the sense of seclusion that comes with being surrounded by Grand Teton National Park and Yellowstone, the contemporary ski chalet and wilderness property doesn’t compromise on convenience or location. Instead, Caldera House is about as close as you can get to skiing nexus Teton Village’s famed tram, which whisks guests to the top of the mountain in less than 10 minutes. With perks that include access to a members-only alpine club, on-site ski-tuning and custom boot-fitting, and your very own ski valet, the spot is quickly becoming the de rigueur home base for skiers and non-skiers alike.

Those who opt to hang out of bounds at Caldera House will find plenty of things to keep them busy, including a fitness center and spa—which boasts an outdoor hot plunge and sauna—and a yoga studio, along with a handsome Italian eatery and bar helmed by local chef Paulie O’Connor. Menu items at the revived Old Yellowstone Garage (a local institution that was briefly shuttered after its original owners’ retirement) range from gyro-style lamb meatballs and bone marrow fondue and ciabatta to a lasagna that’s the stuff of local legend. Another must: the croque monsieur mac and cheese.

The elegant residence-style suites of Caldera aren’t a bad place to lie low either, due in part to their wood-burning fireplaces, snowmelt private terraces (complete with gas grills and Solus fire pits), chef kitchen equipment and master bathrooms appointed with heated floors and oversize tubs to soothe the achiest of muscles.

If that’s not spacious enough, the four palatial 5,000-square-foot four-bedroom suites are sleek and modern, with rich wood tones and adequate dining setups ideal for large groups. Caldera’s smaller suites have more of a classic cabin setup with a modern twist. Still comfy and gorgeous, each one of these hideouts boasts two bedrooms, a luxe chef’s kitchen that will inspire you to cook on vacation and the most enviable of mountain views.

Los Angeles–based firm Commune—one of two design firms that worked on the $100 million project that brought the retreat to life—took inspiration from a number of references: Italian architect Carlo Mollino’s Casa del Sole; Charlotte Perriand’s ski resort Les Arcs in Méribel in France; scenes from 1960s films like Belle de Jour and Charade; mid-century modern Scandinavian pieces; woodworker George Nakashima; the rustic furniture and interiors of Thomas Molesworth; and Navajo motifs. Its work on the public spaces and two of the suites was complemented by the Jackson-based studio Carney Logan Burke, who handled everything else.

A number of acclaimed contemporary artisans and craftspeople also contributed to the custom-built furniture and decor accents that give the space its relaxed Western panache. While at first glance Caldera may seem like an updated attempt at an upscale ski house, the staggering attention to detail throughout is what makes it so enticingly special. 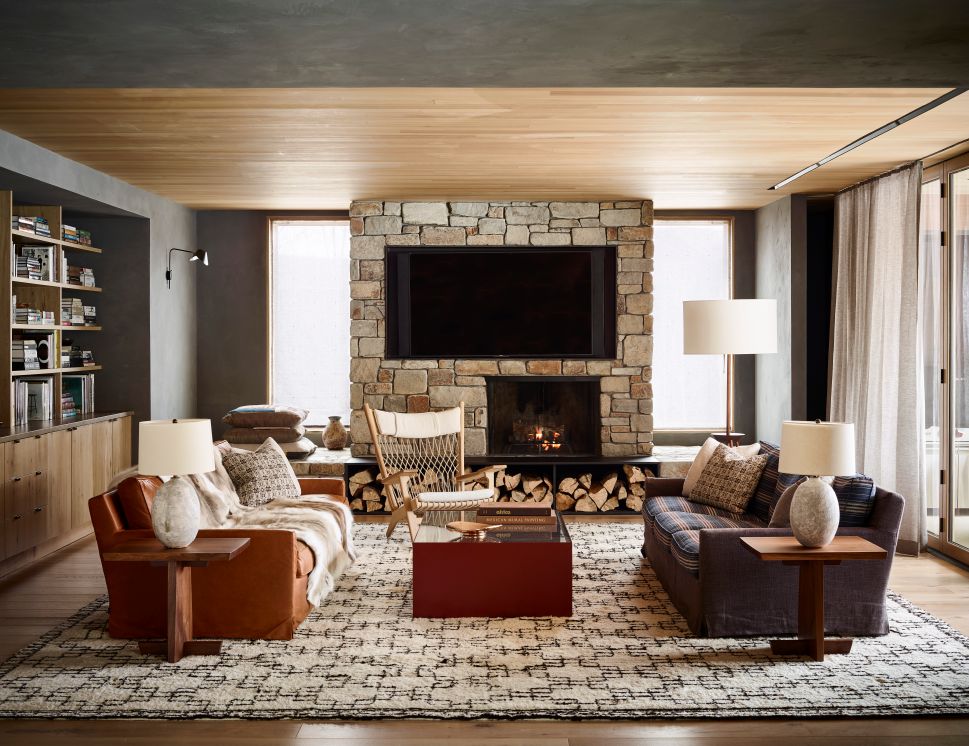