In William, two renowned scientists meet on a university campus in the Pacific Northwest, fall in love, marry and develop a challenging plan to clone a Neanderthal from ancient DNA. What they create is the first caveman to walk the earth in 35,000 years. They call him William. It sounds like a parody of both Encino Man and Planet of the Apes, but the welcome surprise is that it’s quite thoughtful and sensitive, thanks to a captivating performance by Will Brittain that dispels any preconceived notions of cavemen as the hairy, misshapen, grunting brutes depicted in Hal Roach’s One Million B.C.

Directed and co-written by Tim Disney (Walt’s great-nephew), William clears up some of the myths about men who played with dinosaurs, mainly that they were brainless savages driven to extinction by homo sapiens with superior intelligence. William proves to be likable, friendly and brilliant—the result of non-fossilized remains discovered near the very college campus where Julian Reed (Waleed Zuaiter), a professor of paleontology, meets Barbara Sullivan (Maria Dizzia), a medical doctor with a PhD in reproductive endocrinology.

Energized and sexually attracted to each other because of their mutual obsession with creating an actual Neanderthal of their own, they are married by an Elvis Presley impersonator in a chapel in Nevada, where human cloning is not illegal. Back at the university, there are many academic misgivings about the Mary Shelley Frankenstein aspects of the project, but they proceed anyway. Barbara carries the Neanderthal DNA in her womb to full term, giving birth to the healthy baby who has no genetic relation to either of them. But they are proud parents anyway.

From there, life is anything but easy for William, played at different ages by the cutest assembly of child actors imaginable. Bullied by fellow students, his odd facial structure that develops as he matures makes him an object of ridicule. His body metabolism requires him to consume more calories than other kids, who label him a heavy eater with a huge appetite.

But William shows a higher learning ability than other boys his age, as well as a highly developed immune system. His dad promises him great academic achievements replete with university scholarships and graduate-school honors. But traumatized by his own computer research that produces nothing but images from stupid Hollywood science-fiction movies, William has no role models and a waning hope that he will ever be “normal.”

By the time he’s 18, he’s popular in high school, he loves to go hiking with the other guys even though he never understands their crude jokes, and he has a special talent for singing show tunes and pop songs. This is where his parents’ disagreements about what William should do with his life lead to domestic friction and marital discord.

Studying his genetics and behavior patterns may represent a scientific breakthrough, but William’s hormones are bursting. He’s discovering an interest in girls even though he reads that humans cannot mate with Neanderthals, and his need to be loved and find a way to fit into a world of ignorance and hostility overpower his unique reputation as the only living link to the prehistoric past. Soon the internet moves on to other instant news. Scientists research who William is, but what nobody learns is how he feels. In the end, playing God leads to disaster, but your sympathy is with William all the way.

The film moves too slowly for its own good, the low production budget really shows, a need for action never develops, and there is less character development of both William and his human parents to make this of vital importance. But there is more sweetness and humanity in William than in most of the time-wasters I’ve seen recently. 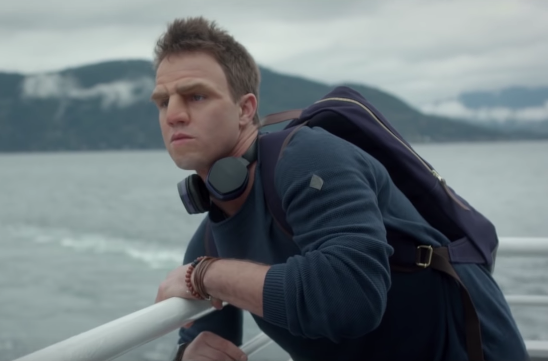