Later this spring, Japan will undergo a significant cultural shift when 85-year-old Emperor Akihito gives up his post and steps down to cede the role to his son, Crown Prince Naruhito. Akihito is the first emperor to abdicate the Chrysanthemum Throne (or imperial seat) in more than 200 years, and his retirement will mark the end of the Heisei Period, which itself began with the death of his father, Emperor Hirohito, in 1989. To commemorate the conclusion of this era and celebrate the advent of the Reiwa Period, the Oak Door steakhouse at the Grand Hyatt Tokyo hotel has created a new signature dish: an enormous monstrosity dubbed the Golden Giant Burger, which spans 10 inches and weighs in at a whopping 6.6 pounds.

It would be generous to call the Golden Giant “mouthwatering,” although the recipe gives away the fact that it was envisioned as a gourmet take on a crowd-pleasing classic: The burger’s ingredients are a cheeky mix of high-end and populist. Thick slices of truffle-garnished Japanese Kuroge wagyu beef rest atop a 2.2-pound American prime beef patty, which itself is cushioned by cherry tomatoes, foie gras, cheddar cheese, springy lettuce, aioli sauce and “two onions’ worth of sliced onion.”

For the grand finale, a waiter tops this caloric beast with a gold-sprinkled bun. If you’re interested in ordering the burger (it’s meant to be split among six people, thank god), you’ll have to shell out 100,000 yen, or $900.

“As a fourth-generation Japanese, I am honored to witness this exciting time of change in the Imperial era while working in Japan,” chef Patrick Shimada told Agencia EFE. “While I was thinking how I could contribute to this once-in-a-lifetime opportunity, I came up with this idea of Golden Giant Burger. In celebration of this special occasion in Japan, we consider using gold as a traditional ingredient to present this burger for the enjoyment of our dearest guests.”

The hamburger’s gargantuan scale brings to mind the hugely popular Canadian YouTubers who operate the channel Epic Meal Time. If you’re unfamiliar with Harley Morenstein and his roving band of carnivorous enablers, just know that these guys have been challenging themselves to make and eat preposterous artery-killing meals for the camera since 2010 (highlights include Chili Four Loko, the Bacon Tree and Meat Cthulhu). Without giving Epic Meal Time too much credit, what started out as a joke (“What if we made a macaroni casserole the size of an oil drum?!”) seems to have mutated into a decidedly mainstream culinary category.

At the end of the day, the Golden Giant Burger’s size is fitting when you consider just how momentous the impending imperial transition of power is to Japan. Two hundred years, guys! 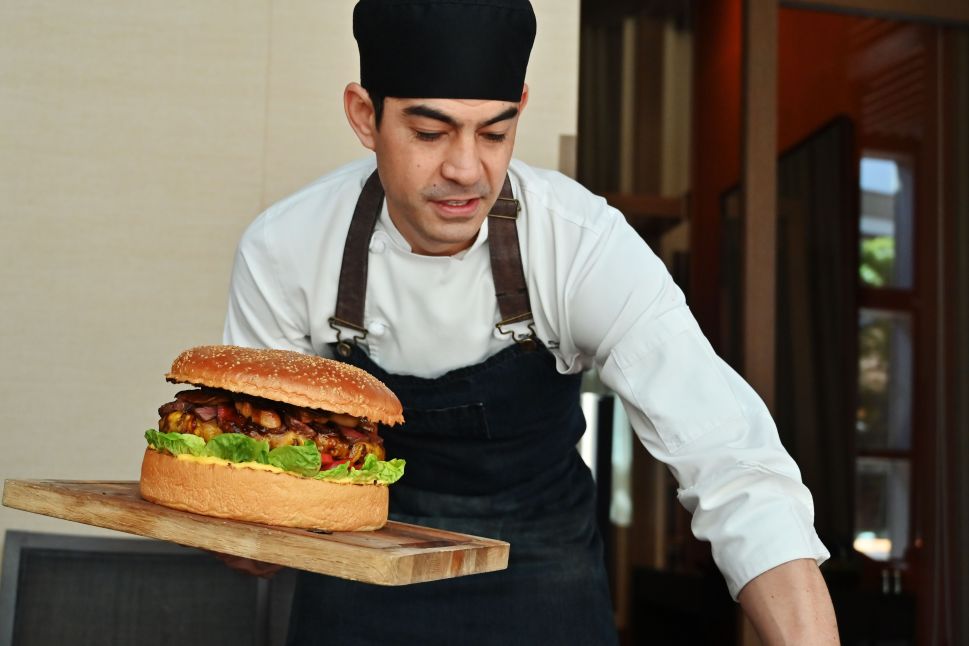