In September 2014, the artist Ai Weiwei took over the island of Alcatraz in San Francisco Bay for seven months, filling the space with an exhibition of portraits, constructed out of Lego blocks, depicting prisoners of conscience. He called the show “@Large.”

Over the duration of the show, 900,000 visitors came to the island’s prison, now a national park, to see “@Large”—far more than had ever served time inside. Of those visitors, 90,000 took part in a simultaneous project called “Yours Truly,” a campaign by Ai to send postcards and letters to the prisoners depicted in the space.

One crucial person wasn’t on Alcatraz, Ai Weiwei himself, who was under house arrest in China at the time. Hence, the relationship that developed between him and the curator of the joint projects, Cheryl Haines, was one that could be categorized as long distance. How bonds can form through correspondence joining two people very far apart is perhaps what led Haines to extend her project into a film, Ai Weiwei: Yours Truly, which just premiered at the San Francisco International Film Festival to a sold out crowd.

Ending up with a documentary wasn’t what Haines had in mind when embarked on “@Large.” Indeed, this is her debut film. She’s never directed before at all.

“We had no intention of making a film,” Haines told Observer. “It wasn’t until Ai Weiwei shared with me the inspiration for ‘Yours Truly,’ which was his father receiving a postcard when they were in exile,” she explained.  “It was only at that moment when I felt there was a story to be told.”  But it wasn’t only Ai’s story. Haines wanted to investigate how the letters that had been sent as part of the Alcatraz project had impacted the lives of the prisoner recipients, juxtaposing their stories against that of Ai’s upbringing.

“The further we got into the process, the more we realized that finding out more about Ai Weiwei’s early life, his upbringing, how his family suffered, would be illuminating. That aspect, the private side of him, was new,” she said. Though it may come as a surprise to many that there’s an aspect of Ai’s story yet to be told—the artist’s celebrity is probably only matched by the likes of Andy Warhol.

Yet it turns out there was much he had not shared. On-screen, Ai Weiwei talks about being sent away with his parents after they were branded as reactionaries to Xinjiang in northwestern China, a region with a large concentration of prisoners of conscience today. “I happen to have grown up in Xinjiang. My father was sent there as a hard laborer. He was a poet, studied in Paris, helped set up the government,” he said. In the Proletarian Cultural Revolution of the 1960s, “he was cleaning public toilets.” (Prisoners in Xinjiang were among the 176 “@Large” portraits. Also included were CIA whistleblower John Kiriakou and Chelsea Manning.)

If Ai Weiwei’s father inspired the Alcatraz projects, so did Marcel Duchamp, the father of modern conceptual art. Alcatraz, the former prison, was a Duchampian ready-made, the artist said. So were the postcards, the medium of “Yours Truly.” “That’s how you use a ready-made, because the prisoners can’t get phone calls,” Ai Weiwei said, defending snail mail at its slowest and least private. “Sometimes, even if you have an air conditioner, you want to open the window and let some natural air blow in.”

Along with natural air came Lego, a medium that was new to him back in 2014, though he’s used it prolifically since. It worked fine with “@Large,” until Cheryl Haines says materials ran out.  “Lego didn’t know what their product was being used for, even though we went to the company and said this was a major exhibition. They were very slow to respond. At one point, we were running out of yellow, so I had to fill suitcases with Lego and fly them to Beijing in order to continue the process,” she recalled.

“Not until ‘@Large’ opened, and Ai Weiwei thought of using Legos for other projects, did the firm start causing difficulty,” she said. Lego refused to sell its products to Ai Weiwei after “@Large” exploded on social media, citing his work’s political nature. The artist’s response was to park white BMW sedans designated as Lego collecting points at a dozen museums in the U.S. and Europe. Cars that his fans overloaded with Legos piled up on Instagram. Lego’s management apologized, and agreed to sell him their product.

Asked about using Lego for the portraits of the prisoners of conscience, the artist turned coy. “Even with a little guy like me, who might not be considered by history as a good artist, I want to master one language, one medium, which maybe no one cares about. So I chose Lego. Maybe I will be remembered as a Lego master, just as van Gogh will be remembered as someone who painted the Sunflowers, or Andy Warhol doing Mao or Marilyn Monroe.”

“I’m also a selfie master,” he added, eager to give his joke more mileage. “That’s fair enough, because there’s almost no competition.”

But these days, Ai’s public events are competing with each other. At the Museo Universitario Arte Contemporáneo in Mexico City, the day before the world premiere of Yours Truly sold out the Castro Theater in San Francisco, Ai Weiwei opened Reestablishing Memories, an installation of Lego portraits of 43 trainee teachers involved in political protests who were abducted by police in 2014 and presumed massacred. “Every crime creates a vacuum, and it poisons society,” Ai Weiwei declared at a news conference last week, as Reuters reported from Mexico City.

Speaking with Observer in San Francisco on the morning after the world premiere of Yours Truly, Ai revealed perhaps another of his sides less well-known to the media. Pivoting unexpectedly from his standard role of delphic charmer, Ai changed the conversation from toys to tech to political values.

“You can put surveillance on me, use your technology,” he said, without mentioning names. “You can tap my phone, do whatever, secretly, as long as you give me the right to investigate you.”

He went on. “I don’t trust those liberals, even if they call me one,” noting that he won bets with his liberal friends on Donald Trump’s 2016 election win. “They are incapable of taking any meaningful action. It’s just talking heads. And when the discussion gets deep, they don’t talk about it. They try to avoid that.”

“They’re not as tough as those conservatives, [who are] very practical. You see, globally, [conservatives] won a lot in the past years. Unfortunately, but you see it. Who to blame? The liberals of course, because they’re the ones who play the game, the two sides of it,” he said.

“Let’s wrap this up,” said Jennifer Ng of Ai Weiwei’s studio, who was in the room to post on Instagram and help the artist when he struggled with a phrase in English, which was rare.

Ai Weiwei laughed, with a sincerity you could hear. “Whenever we talk about liberals, time is up.” 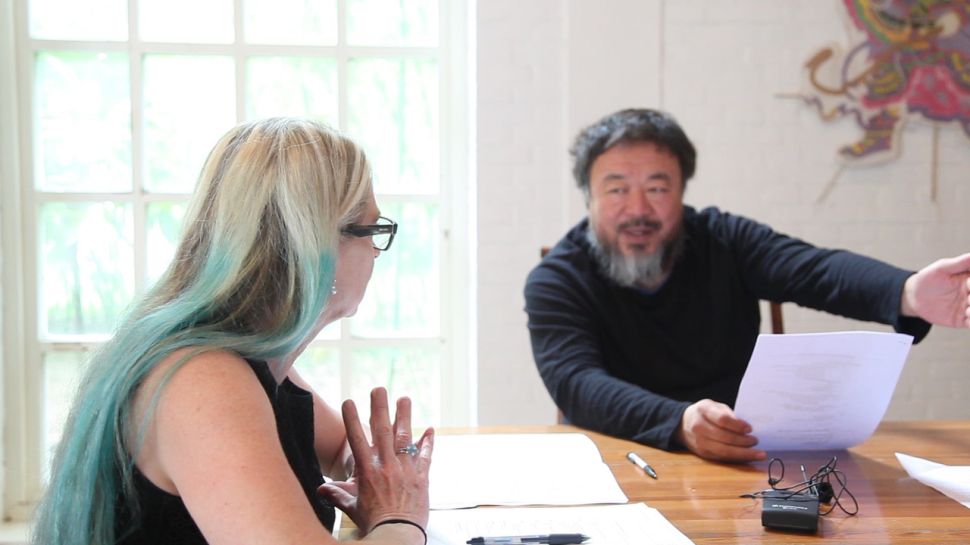