There’s no way to opt out of the dominant forms of culture anymore. Many of us seek out pop culture, viral media and immersive experiences, and those who don’t have it delivered to our phones anyway. I don’t always appreciate the forcefulness of this kind of culture, but this week, a visit to five smaller museums in the New York area reminded me how much fun smart exhibition curation can be when engaging familiar subjects. J.R.R. Tolkien, Game of Thrones, a planetarium screening, Jim Henson, and dogs may not have more in common than the ability to spark empathy and a beloved place in the hearts of their devotees, but that’s certainly enough to build a great exhibition.

Take the J.R.R. Tolkien show at the Morgan Library, a small exhibition with blockbuster star power. With more than 150 million copies sold, Tolkien’s The Lord of the Rings ranks as one of the world’s best-selling novels. The exhibition, though, immediately paints Tolkien as surprisingly relatable. A few feet into the show, a wall label describes Tolkien as an average student, and his workbooks and early watercolor landscapes support this. The writer’s astonishing artistic growth mapped out in its entirety for audiences feels nothing short of inspiring.

The gallery’s relatively small space houses a surprising amount of material; family photographs and memorabilia, original watercolors, doodles, letters, maps and draft manuscripts of the author’s classic novels The Hobbit, The Lord of the Rings and The Silmarillion.

Wall text headers in English and Elvish (a language Tolkien famously developed in his novels) signal what’s in store—a portrait of a man consumed by plotting out every detail in this imaginary world.

Even for those who appreciate the novels, but don’t identify as Tolkien fans, an unmistakable thrill exists in the mere sight of his drafts and notations. Although (to my eyes) mostly illegible, many give further insight into the vision behind these books. For example, from a wall label relating to a draft made in red text, viewers learn that Tolkien originally intended to print fire-script in red, but could not do so due to cost. In another piece, a map stitched together from various scraps of paper, viewers see the time-consuming process in which Tolkien created the fictional landscape for his world. This included visual representations of his worlds, of which Tolkien created many. His stylized treatment of foliage often resembles stained glass windows, both in line and luminosity, and provide yet another reason to visit the show.

Fantasy fans may find a similar interest in the Rubin Museum’s Game of Thrones-themed tour of their exhibition, “Faith and Empire: Art and Politics in Tibetan Buddhism.” The tour offers an opportunity to learn about the historical role of power, religion and politics within human history by drawing connections between the exhibition’s art and ephemera and the characters and narratives of HBO’s Game of Thrones (based on George R.R. Martin’s A Song of Ice and Fire novels). For example, the Hindu goddess Durga maps to female warriors like Lyanna Mormont and Arya Stark and the rebirth symbolized in the Buddhist “Wheel of Life” relates to the resurrection of figures like Lady Stoneheart and Jon Snow.

The best mythologies offer more than just real-world parallels—they inspire the imagination through example. Take Kambui Olujimi’s “Skywriters & Constellations” at the Newark Museum. His immersive installation Skywriters  projects collaged figures and luminescent drawings onto the dome of the Museum’s Dreyfuss Planetarium, creating a night sky that recounts the adventures of Iku. Like many myths, the stories begin and end abruptly and follow a dream-like logic. In one, a narrator describes Iku as a man who represents law and order, in another, he’s described as a hippopotamus with a fork-shaped tongue. Calamity after calamity forces Iku to new surreal locations. During his travels, he visits a hotel that can erase memories, a factory producing shark repellent made from embryonic fluid, and a city that may be run by a new robot workforce. The stories describe a man whose life is tormented by secrets, adversity and endlessly refracted experiences, but they evoke awe rather than fear. Narratives spun straight from the sky dazzle and spark joy.

While Olujimi uses the audience-friendly medium of the planetarium, the Museum of the Moving Image directly engages pop culture in all of its programming. Perhaps no show on view better represents this than their permanent Jim Henson exhibition, which includes a multitude of puppets, as well as drawings, video clips and other ephemera related to the entertainer’s projects. Though Sesame Street’s Big Bird and Cookie Monster get their share of space in the exhibition, the vast majority of puppets derive from Henson’s Muppet’s TV and Film series (1955-present), which cast puppets as the main characters in absurdist sketch-comedy shows. Miss Piggy in a wedding gown, film critics Statler and Waldorf and a chipper Kermit all provide familiar, friendly material, while the Fraggle Rock puppets of the ’80s employ more complex mechanics.

Jim Henson had a knack for distilling characters into a single essence, making them comically inclined and relatable. In the case of Fraggle Rock, the near endless material for jokes comes from the friction between Doozers, an adult-friendly character that only wanted to work and Fraggles, a kid-friendly character that only wanted to eat Doozer constructions and play. With the puppets displayed still and behind glass, some of that gets lost, but the accompanying videos do a good job of mitigating the problem. Not only do they reveal some of the mechanics involved in operating the puppets, but show them in action. As the exhibition aptly demonstrates, a dancing Fraggle is a funny Fraggle.

Just as we see ourselves in puppets, we similarly find human qualities reflected in dogs. That mimicry combined with unconditional love makes our canine friends the center of many lives, not to mention the programming of the American Kennel Club’s (AKC) Museum of the Dog. Newly reopened in New York City after two decades in St. Louis, the museum attracted more foot traffic in its first two weeks than it did in a whole year at its previous home.

On its face, the exhibition space seems similar to the Museum of Ice Cream or the Pizza Museum—endeavors that combine the imprimatur of the institution with easily appealing subject matter to attract paying audience members. In reality, this non-profit looks quite different from its for-profit counterparts, presenting an exhibition of items from its permanent collection for the purpose of education and appreciation of dogs.

Assembled by the AKC’s director of cultural resources, Alan Fausel (formerly of Doyle, Bonhams and an Antiques Road Show expert), the first floor of this two-story exhibition consists primarily of virtuosically rendered dog paintings from the 17th century through to today. What constitutes a good painting? “It depends who you ask,” Fausel told me, explaining that dog breeders look for dog portraits that meet the standards set for the breed, whereas art experts will look at paint handling and composition. Percival Leonard Rosseau’s oil painting English Setter in a Field, 1900, arguably meets both criteria, his fresh loose brushwork perfectly capturing a sporting dog mid-hunt.

Like Rosseau, artists such as Maud Earl, Richard Ansdell and Sir Edwin Landseer (Queen Victoria’s favorite painter) earn the title of master painters of the 1890s, a period Fausel describes as a golden age for dog art. This centers the majority of the museum’s holdings, which also include a 33,000-year-old fossil of a dog, a messenger dog collar from World War II, a video game, a wall of ceramics, a TV station, a library and yes, an interactive kiosk that matches visitors with the dog they most resemble. (I got paired with a Spanish Dog.)

As the one place in the museum with a line, it could be observed that the MoD offers an experience distinct from most other museums in the city—one of contemplation, relaxation and perhaps most importantly, appreciation. 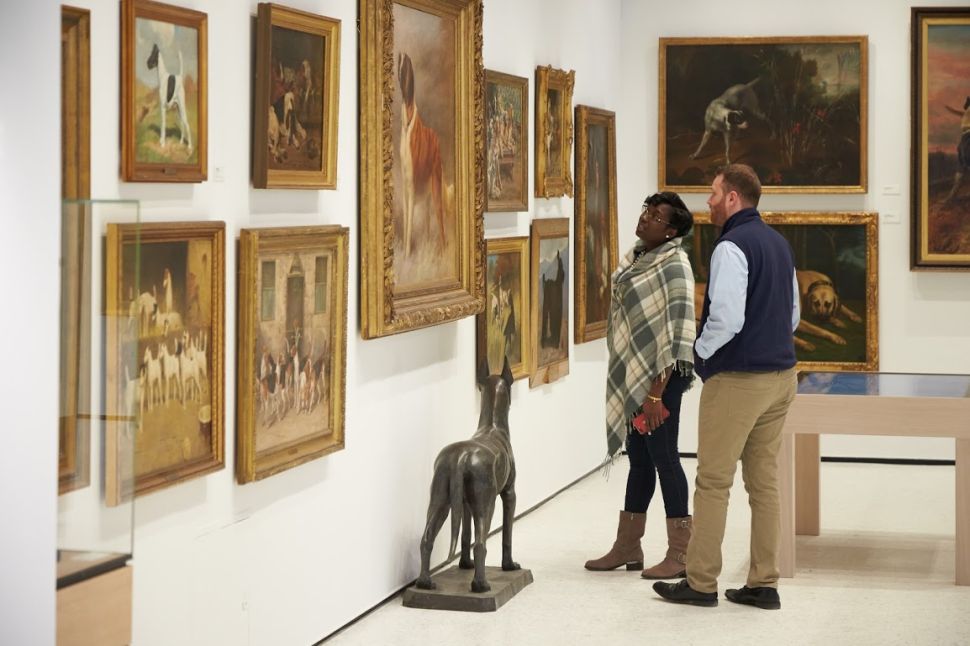